On May 18, 1980, Mt. St. Helens erupted. This volcano in Washington state completely changed our thinking on how long it takes for some geologic processes to happen. That initial eruption destroyed over 230 square miles of forest, and caused 57 deaths. A huge debris flow (rock, soil, trees and mud) almost 150 feet deep blocked up Spirit Lake which had previously drained into the Toutle River. The initial avalanche of debris dumped into Spirit Lake caused a huge wave (up to 860 feet high) which washed up onto the surrounding slopes, destroying trees and then dragging them back into the lake as the water flowed back downhill. 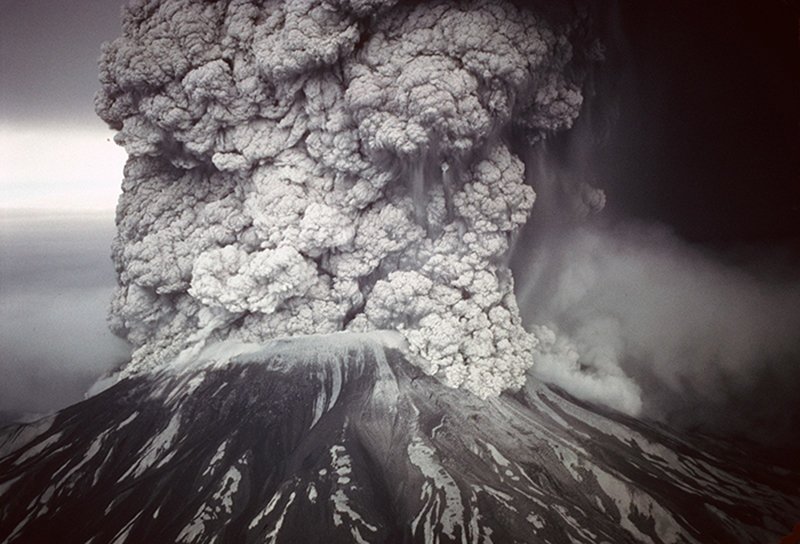 Over one million logs were dumped or washed into Spirit Lake, most of which floated on the surface. But some of them sank and settled upright on the lake floor. In fact, you can visit Spirit Lake today and still see some logs floating on the surface of the lake, though it’s been many years since the eruption. Many of these trees had the bark stripped off them; this bark settled onto the bottom and mixed with volcanic mud, forming a layer of peat. This peat looks like the precursor to the coal beds found in the Eastern United States. Many geologists believe peat takes millions of years to form, but this lake-bottom peat started forming within a few years. If you were to scuba dive in the lake, you would see what looks like an underwater forest, with some logs laying down and others standing up, looking like trees growing out of the mud at the bottom. 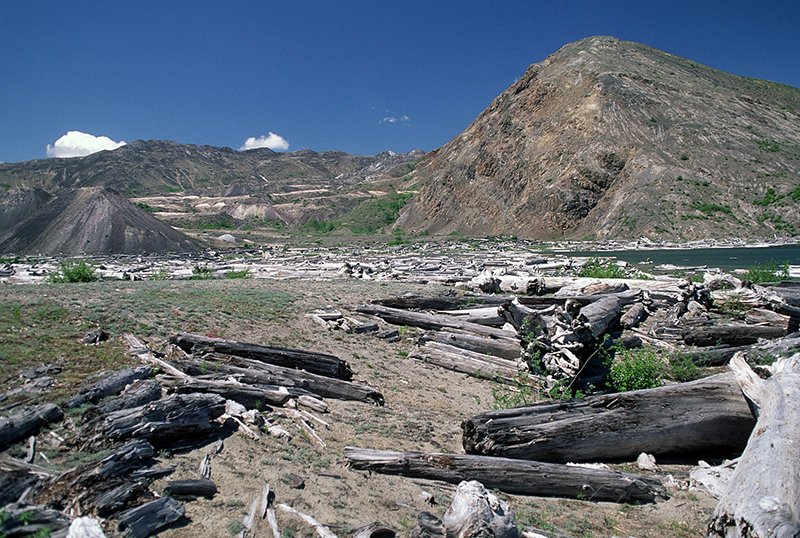 Logs in Spirit Lake after the volcanic eruption

On March 19, 1982, almost two years after the initial eruption, Mt. St. Helens again had a major eruption which not only blasted ash and rock outward, but also melted loads of snow in the crater and on the sides of the mountain, which caused a huge mudflow to travel downslope . This mudflow was traveling at 40 miles per hour and quickly cut through the previously deposited debris filling the Toutle River valley. This flow of water, mud, and ash carved out the Little Grand Canyon of the Toutle River in a single day, and in some places was up to 140 feet deep. This canyon got its name because it looks like and the Grand Canyon in Arizona, though it’s 1/40 the size of it.

Then just two months later, Mt. St. Helens erupted again, and two more canyons were formed on the sides of the volcano by the fast-moving mudflows. Loowit Canyon was cut through hard basalt rock over 100 feet deep, and Step Canyon formed when the mudflow cut through softer lava and ash layers to a depth of almost 600 feet. Small creeks and rivers flow through these canyons today, but we know these did not carve out the canyons slowly over millions of years. They were formed by mudflows caused by volcanic eruptions in just hours.

Mt. St. Helens, before and after eruption

Mt. St. Helens is an important site for understanding how catastrophes can shape the land by laying hundreds of feet of sediment and carving out canyons quickly. Mt. St. Helens can also help us understand other features as well, such as peat, coal, and even fossil forests. These fossil forests may not be the remains of forests at all, but logs transported and buried by mudflows. We often hear that these things form slowly over millions of years, but the lessons we learned from the volcanic eruption of Mt. St. Helens are that each of these things can happen within just a few hours.