Formation of the Grand Canyon

Creation scientists believe that most of the world’s canyons formed at the end of, or sometime soon after, the flood. The Grand Canyon was no exception. The majority of the rock layers through which the Grand Canyon was carved were laid down during the global, watery catastrophe. But some of the basement rocks (schists and granites) are from creation week. 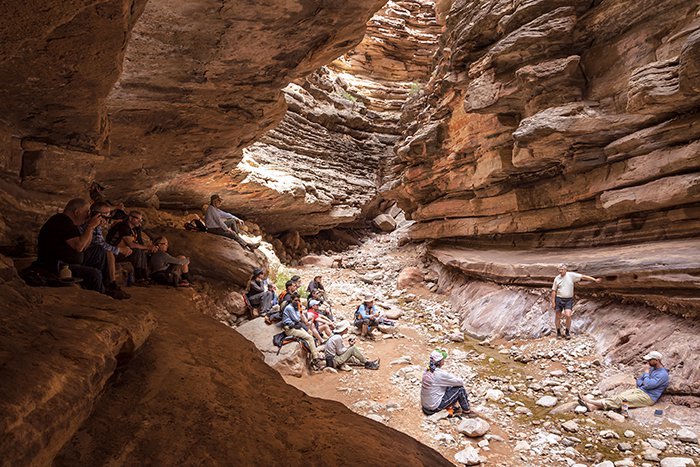 Geologist Andrew Snelling explaining how the destructive waters of the Flood sheared off the earth’s surface and then deposited horizontal layers on top. Here in Blacktail Canyon, he can stand on rocks from Creation Week, and then touch the first deposits laid down during the Flood.

As the late stages of the flood ended and the laying down of sediments on the Colorado Plateau ceased, there appears to have been an uplift of the entire region. There are several areas of the Grand Canyon that show rocks bent almost 90 degrees. Yet these rocks are not broken, meaning they were soft when this uplift occurred. As the plateau was pushed up from earth movements, massive amounts of water began eroding the soft sediment layers (forming the Grand Staircase and Zion Canyon), as they drained into the newly-formed ocean basins. This process of mountains (and plateaus) rising and ocean basins sinking is described in Psalm 104:8. Some channels (like a creek or stream) would have formed as these waters began to diminish. But eventually the rise of the Colorado Plateau would have caused a natural dam barrier and trapped water behind in large lakes to the east and north of what is now the Grand Canyon. 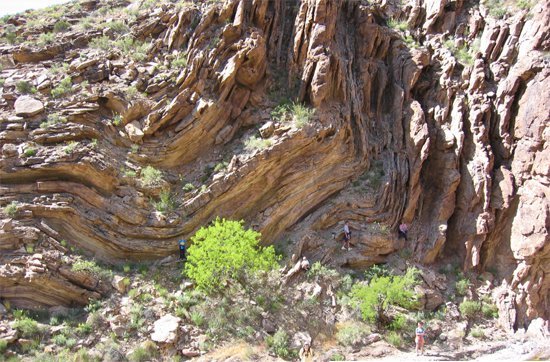 A 90° fold in the eastern Grand Canyon is pictured here.

Shortly after the flood ended, the Ice Age began, initially with increased rainfall and remnant volcanic activity (which had started during the fountains of the great deep breaking open at the onset of the flood). This rain would have been slightly acidic and would have eroded more easily into the limestone (a type of sedimentary rock) within the layers making up the plateau. This began the process of weakening the natural dams that were blocking the lakes. Once the dams started to breach, the acidic water would have opened larger and larger holes in the dams until large volumes of water burst out. This water likely flowed rapidly through the channels that had formed during the end of the flood, and catastrophically eroded what is now the Grand Canyon. This process did not take millions of years, but likely occurred within a year (or less).

But some geologists claim that the canyon is millions of years old, and say that the folds and bends in the rocks are proof of this. In the lab, rock can be bent without cracking under intense heat and pressure, but the process changes the minerals and structure of the rock (this process is called metamorphosis). In the Grand Canyon, though, the bent or folded sedimentary layers show no evidence of metamorphosis over the claimed millions of years since the sedimentary layers were deposited. Instead, they strongly indicate that the sedimentary layers were still soft when the earth movements that bent them occurred, only months after they were deposited during the flood. In fact, Dr. Andrew Snelling has recently collected rock samples from several locations within the Grand Canyon where dramatic sedimentary rock folds occur. He is currently analyzing them to confirm that they have not been metamorphosed, as he expects. This would be strong evidence that the layers were folded when soft, only months after they were deposited during the flood, and are not millions of years old.