Did Dinosaurs Evolve Into Birds?

“So God created...every winged bird according to its kind...So the evening and the morning were the fifth day.” (Genesis 1:21, 23) 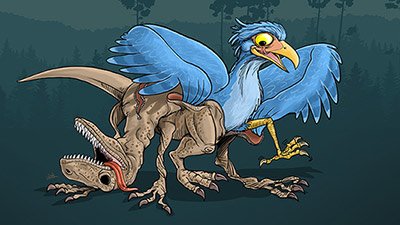 The idea that dinosaurs evolved into birds is false.

Many evolutionists believe that dinosaurs didn’t really go extinct but that they are feeding outside on your bird feeders! This idea that dinosaurs evolved into birds is a very popular one. But what does the Bible say about this? Our Bible verses tell us that birds were created on Day Five of the Creation Week and land animals were made on Day Six. Since dinosaurs are land animals (sometimes people call marine reptiles or flying reptiles dinosaurs, but they aren’t actually dinosaurs), all of the dinosaurs were made after birds! Dinosaurs and birds are not related!

Dinosaurs, reptiles that are very different from birds, did not change into birds. God specially created birds on Day Five and dinosaurs on Day Six!