The shape of the moray eel allows it to hunt prey that is larger than it can swallow. 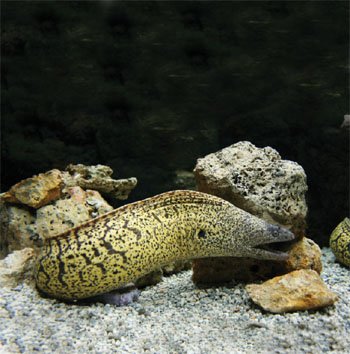 The shape of the moray eel allows it to hunt prey that is larger than it can swallow. When the eel captures a large prey, it will wrap itself around the victim in a sort of knot and either flatten the prey’s body enough to swallow it, or tear off a piece of its prey to eat it. This predatory behavior was not part of this creature’s original design since all animals were created as vegetarians. They did not hunt other animals until after the Fall of man.

Size: From 6 in (15 cm) to 15 ft (4.5 m)
Weight: Average 30 lbs (13.5 kg)
Diet: Mostly fish, also crustaceans and octopuses
Habitat: In rock crevices and small caves in all tropical seas and some temperate oceans