The most popular naturalistic explanation about the origin of the universe is the big bang hypothesis. At its simplest, this view suggests that the universe emerged rapidly from a hot, dense state several billions of years ago. However, there are several differing versions of the big bang idea, with disagreement among the versions. As one scientist has pointed out, there are many problems with this view.

Big bang cosmology is probably as widely believed as has been any theory of the universe in the history of Western civilization. It rests, however, on many untested, and in some cases untestable, assumptions. Indeed, big bang cosmology has become a bandwagon of thought that reflects faith as much as objective truth. (G. Burbidge, “Why only one big bang?” Scientific American 266:2, 1992, p. 96.)

Eventually, according to the naturalistic worldview, our solar system originated from a spinning cloud of gas (this idea is known as the “nebular hypothesis”). As with the big bang idea, the nebular hypothesis has many scientific problems and runs counter to the biblical teaching. 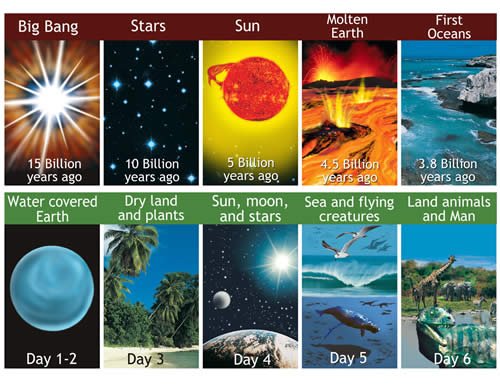 Image from The New Answers Book 2.

The big bang theory does not fit with the Bible.