What Are They, Really?

In evaluating the alleged transitional forms, it can sometimes be difficult to separate fact from fiction. Did the fossil have feathers or were the “feathers” simply frayed collagen fibers? Was it an actual bird or some type of reptile?

Without access to the original specimens themselves, we can only base our conclusions on highly interpretive articles about the fossils. If your museum displays casts of the original fossils, spend most of your time looking at these, rather than at the showcases of someone’s imagination.

World-renowned evolutionary ornithologist, Dr. Alan Feduccia, has said, “Paleontologists have tried to turn Archaeopteryx into an earth-bound, feathered dinosaur. But it’s not. It is a bird, a perching bird. And no amount of ‘paleobabble’ is going to change that.” (Alan Feduccia, quoted in V. Morell, “Archaeopteryx: Early Bird Catches a Can of Worms,” Science 259:5096, February 5, 1993, pp. 764–765.) For example, Archaeopteryx had: 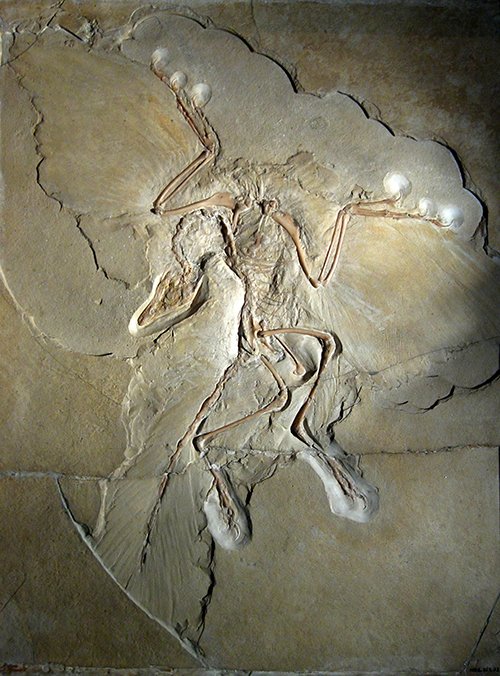 Although frequently illustrated with feathers, none were actually found on the 95-percent-complete Bambiraptor skeleton! Wes Linster, a fourteen year-old fossil hunter, discovered the unusually complete Bambiraptor skeleton in 1995, while he was searching in Glacier National Park (Montana, USA). Although Bambiraptor, a small theropod dinosaur, is claimed to be an ancestor of birds, it has been given an age of 75 million years younger than the true bird Archaeopteryx.

Evolutionary ornithologists Larry Martin and Alan Feduccia believe that this specimen is more likely to be a flightless bird similar to an ostrich. Caudipteryx even used gizzard stones like modern plant-eating birds, but unlike theropods (www.answersingenesis.org/dinosaurs/feathers/what-another-feathered-dinosaur-claim/).

The Confuciusornis genus is a group of birds, the fossils of which have been found mainly in China. Some in this variety had long tail feathers, and large claws on their forelimbs. Some scientists believe these birds may have been flightless (en.wikipedia.org/wiki/Confuciusornis). Interestingly, some modern birds possess wing claws at certain stages in their life cycles: the ostrich, emu, hoatzin, moorhen, and coot. Anatomist Dr. David Menton wrote, “There is no question that M. gui had true pennaceous feathers essentially identical to those of modern birds. … The microraptors themselves, including M. gui, are more like birds than theropod dinosaurs. If we compare the hands of Microraptor to Archaeopteryx, for example, we find the same bird-like phalangeal formula for their digits (2-3-4)” (www.answersingenesis.org/extinct-animals/did-microraptor-gui-invent-the-biplane/). Dr. Alan Feduccia et al. have concluded that “the microraptors of China are birds, regardless of their ancestry” (A. Feduccia, T. Lingham-Soliar, & J.R. Hinchliffe, J Morphol 266, 2005, p. 162).

This creature was a small theropod dinosaur that had one large claw in its forelimbs. It also had a keeled sternum, as birds do, leading some to postulate a link between the two. However, keeled sternums are also found in moles, and enable them to be strong diggers.

This creature had true feathers, and according to some evolutionists, was most likely a flightless bird, similar to the ostrich. It had birdlike teeth and lacked the long tail seen in theropods (J. Bergman, “The evolution of feathers: a major problem for Darwinism,” TJ 17:1, April 2003, pp. 33–41, online at www.answersingenesis.org/birds/the-evolution-of-feathers-a-major-problem-for-darwinism/).

According to the scientists who reported this fossil, Protopteryx was a true flying bird. Its fossil showed imprints of downy feathers, and it had a procoracoid process on its pelvis, which indicates flight ability in modern birds (Fucheng Zhang and Zhonghe Zhou, “A primitive enantiornithine bird and the origin of feathers,” Science 290:5498, December 8, 2000, pp. 1955–1959).

Enough of this creature’s lung structure was preserved to show that it had the bellows-like lung of reptiles, rather than the flow-through lung structure of birds. Additionally, according to four leading paleontologists (including John Ostrom from Yale), the “feathers” found with this dinosaur were actually a parallel array of fibers, probably collagen, rather than true feathers (New Scientist 154:2077, April 12, 1997, p. 13). By James St. John [CC BY 2.0 (http://creativecommons.org/licenses/by/2.0)], via Wikimedia Commons

This dinosaur had a unique shoulder joint that was highly mobile and seemingly quite bird-like. However, its body was too large to lift off the ground in flight. Since we are not able to observe how this creature moved, we cannot know for sure how it used its shoulder.

Regarding this fossil’s place in the dino-to-bird transition, evolutionist Peter Dodson stated:

I hasten to add that none of the known small theropods, including Deinonychus, Dromaeosaurus, Velociraptor, Unenlagia, nor Sinosauropteryx, Protarcheaeopteryx, nor Caudipteryx is itself relevant to the origin of birds; these are all Cretaceous fossils … and as such can at best represent only structural stages through which an avian ancestor may be hypothesized to have passed. (P. Dodson, “Origin of birds: the final solution?” American Zoologist 40, 2000, pp. 505–506.)

Previous Article Did Dinosaurs Turn Into Birds? Next Article Age of the Dinosaurs?