See how the bones are piled together?” Mrs. Brown asked, holding up a photo. “Lots of dinosaur fossils are in this park. The rushing water of Noah’s Flood probably picked up and carried all these dinosaurs at once and dumped them in a pile. They were buried by mud under this hill.”

Ethan listened carefully. Mrs. Brown was the best Sunday school teacher. Last week, she taught the fifth graders that Genesis 1 says God created the sea and land animals on the fifth and sixth days of creation—including dinosaurs. God also created humans on the sixth day. So Ethan knew dinosaurs were on the earth at the same time as humans.

Alissa, Ethan’s twin sister, burst out, “Is that the Flood that covered the earth when Noah built the Ark?”

“But did they have any dinosaurs on the Ark? How did they fit?”

Mrs. Brown smiled, “Parker, do you want to answer?”

Ethan liked it when Mrs. Brown’s son, Parker, came to class. He was training to be a paleontologist—someone who studies fossils, including dinosaur fossils.

“Only some of the dinosaurs were really big,” Parker said from his seat next to Ethan.

Parker smiled. “Yes. But the sauropods on the Ark might have been young, so they were smaller,” he explained. “Also, the Ark was longer than a football field and four times taller than your school!”

Parker continued. “On average, dinosaurs were about the size of a buffalo.” Ethan looked at a photo of a dinosaur fossil being passed around. He squinted to try to see it better.

“I can’t tell if that’s a sauropod,” he murmured.

“Here!” Parker pulled a small magnifying glass out of his pocket. “With this, you’ll see more clearly than ever before!”

“Wait! Let me see!” Alissa grabbed at the glass.

Umph! Ethan, Alissa, and Parker were tangled together in a thick patch of the greenest grass they’d ever seen.

Ooof! Alissa’s arm landed in his stomach as she pushed herself up. In moments, all three were standing and looking around. They were at the edge of a forest.

“Everything looks so bright,” Parker said.

“But where are we?” Ethan asked. “What happened?”

She reached over to grab it out of Ethan’s hand again. But he wouldn’t let go. He held his arm up, out of Alissa’s reach. 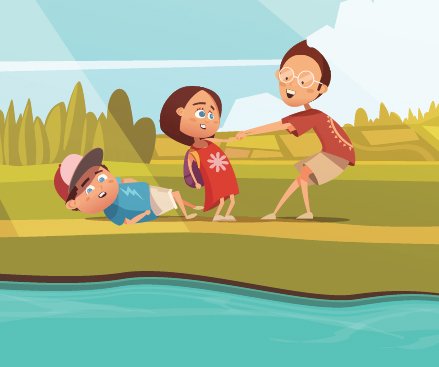 Alissa jumped and tried to snatch the glass.

“Got it!” she cried, as her hands touched it.

“No!” Ethan cried clutching it with all his might.

Alissa yanked with all of her strength and pulled it out of Ethan’s hands. But as her arm swung back, she lost her grip on the magnifying glass.

Ohh! The children gasped as the magnifying glass sailed into the trees.

Parker frowned. “Well, we need to find it, because it’s not just a magnifying glass . . . we can’t get back without it!”

“But where are we?” Alissa asked as they walked into the trees. They carefully watched the ground, trying to glimpse the magnifying glass.

Ethan bit his lip. “And when are we?” he asked.

Parker stared at the ground. He bent down.

“Did you find it?” Alissa asked. The children looked over Parker’s shoulder.

Ethan’s eyes grew big. “Is that what I think it is?” he whispered. 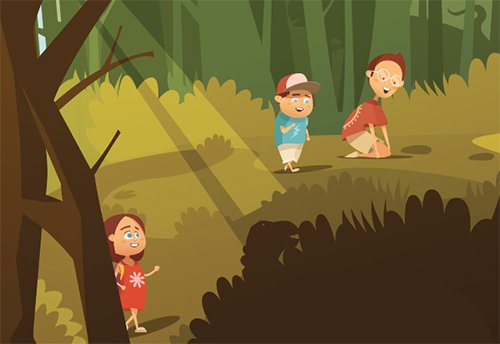 “Some kind of sauropod,” Parker said.

Magnifying glass forgotten, the three adventurers followed the tracks through the woods.

They were so excited they didn’t realize that tracking a dinosaur might not be the safest thing to do.

Suddenly they were on the other side of the trees.

“Look!” Alissa pointed to a meadow where creatures were munching on plants and basking in the sunshine.

“That’s no petting zoo!” she exclaimed. “Those are huge, like the ones Mrs. Brown said became piles of bones.”

Ethan climbed onto a log several feet away. “Are any people around?” he called back. 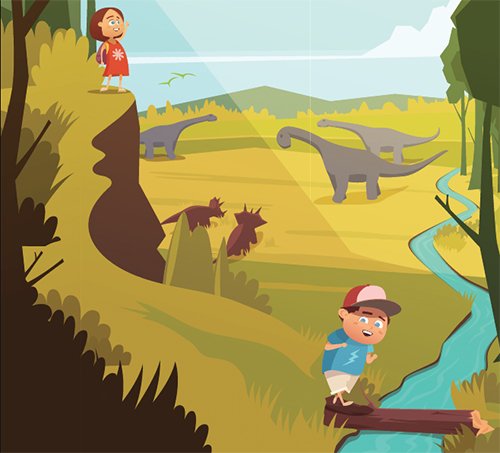 “Might be,” Parker answered from behind some bushes. “But I don’t see any.” Everyone was so eager to get a closer look at the plains below that they didn’t hear the rustling behind them . . .

The adventurers spun around.

The Brontosaurus bellowed as it tore at leaves on a treetop.

“‘Look now at the Behemoth, which I made along with you.’ Job 40,” Parker whispered. “The Bible says a creature like this lived in Job’s day!”

Aack! Ack! The animal coughed, and something flew out of his mouth.

The magnifying glass! We can go home! 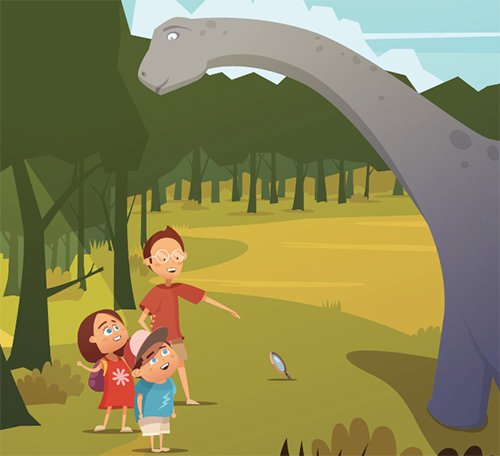 With God’s Word, Ethan knew he would never, ever doubt that God created the world and its beauty. Including dinosaurs.

In the Land of the Dinosaur 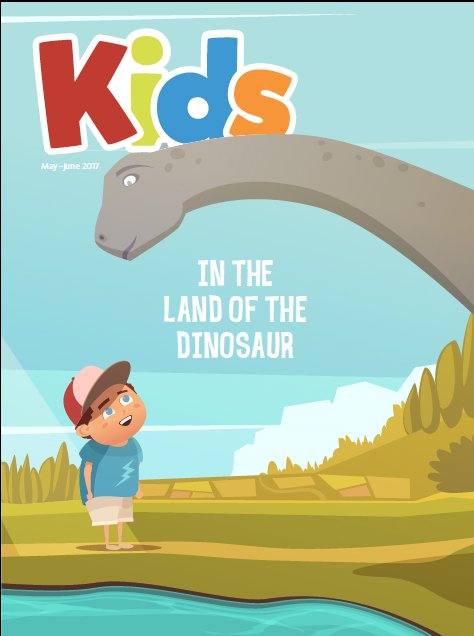 We don't have a special magnifying glass that can take us back to see God's creation in person. But we have something better—an account from God Himself!