This dinosaur gets its name meaning “roofed lizard” from the original belief that the plates on its back lay flat, like shingles on a roof. Named by Othniel Charles Marsh in 1877, this stegosaur has since been found throughout the western United States.

Stegosaurus was a large herbivorous dinosaur and the largest member of the stegosaur kind. This group is characterized by plate-covered backs, short forelimbs, longer hind limbs, and spiked tails. 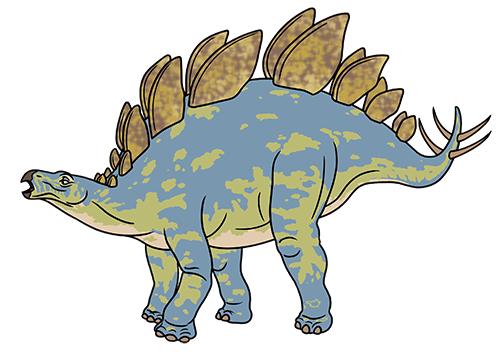 This animal stood at 10 or more feet (not including the plates), weighed 5+ tons, and reached lengths of up to 30 feet.

When looking at Stegosaurus, you will likely immediately notice its two main features: its plates and spikes. An average of seventeen bony plates of varying sizes lined its back, neck, and tail. The largest of these plates were over 2 feet tall and 2 feet wide. These plates were most likely used for display, attracting mates, and identifying individuals. However, the presence of blood vessels in the plates leads some paleontologists to believe that they may have been used for thermoregulation as well.

The four tail spikes, called “thagomizers,” get their name from a comic strip by Gary Larson in 1982. Soon afterward, paleontologists realized that they had never given the spikes an official name. So thagomizer became the official term for this part of Stegosaurus anatomy. These long and sharp spikes were undoubtedly used for defense. The tips of many of these spikes are damaged, and some Allosaurus fossils have been found with puncture wounds matching Stegosaurus spikes. The largest of these spikes could be three feet long! The Stegosaurus had a very flexible tail that would allow it to swing its spikes up to its side, defending its flanks from would-be attackers.

Throughout the years, Stegosaurus has become one of the most popular and recognizable dinosaurs. It made its first major public appearance in the 1933 King Kong film. It has since become popular in the form of toys and stamps and has appeared in various movies, documentaries, and TV shows. 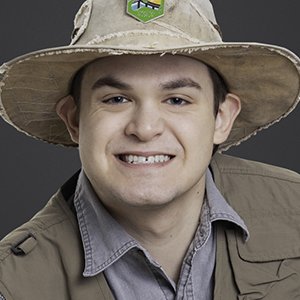