By starting with the Bible, we can piece together the true history of dinosaurs.

You’ve probably heard that dinosaurs lived millions of years before humans. But Genesis 1 says God created all the land animals (including dinosaurs) on Day Six of Creation Week about 6,000 years ago. That means dinosaurs and humans once lived together.

Dig in: Did boys and girls really live with dinosaurs? Besides what the Bible teaches, humans in the past have painted, sculpted, and written about creatures that looked like dinosaurs. 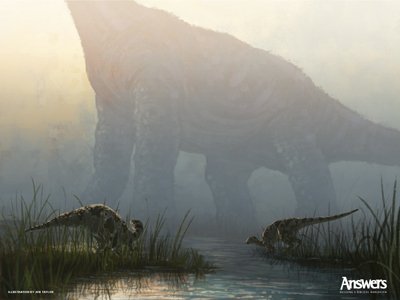 When Adam disobeyed God, his actions didn’t impact just humans—the whole universe suffered. His disobedience led to death, and animals began eating each other (like we still see today). Some of the dinosaurs that originally ate plants became meat-eaters, too.

Dig in: Vegetarians? What about those sharp teeth? While all animals were originally plants-eaters (Genesis 1:29–30), by the time of the Flood there were many meat-eaters. The Bible doesn’t say if God re-designed them (like He did the plants with thorns) or if some animals changed the use of their original designs. But we know that God's original creation was very good (Genesis 2:3), free of meat-eaters!

Because humans kept disobeying God more and more, He finally had to judge the earth with a global Flood about 4,500 years ago. Two of each kind of dinosaur survived on the Ark with Noah. The rest drowned in the floodwaters, and some became fossils.

Dig in: Weren’t dinosaurs too big for the Ark? Only some of them were huge. Noah could have taken the younger and smaller ones within each kind, instead of the big ones.

The Flood changed how the world looked—and even the weather. The Ice Age that followed would have made it hard to survive. Besides that, disease, changes in food and environment, and hunting by humans could explain why many of these creatures went extinct.

Dig in: Did humans encounter dinosaurs? Some did. (Noah lived with them for a year on the Ark!) Except for hunting, most people probably tried to avoid these creatures—just like we avoid crocodiles today. 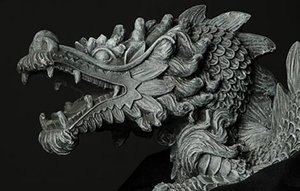 As dinosaurs died off, the stories about them didn’t. As the stories were retold, people added parts that were fun to hear, but not altogether true. Soon, the stories even said that these monsters hoarded gold, had magical powers, and kidnapped princesses. They became the dragons of folklore.

Dig in: Are dragon legends based on dinosaurs? Some probably are! Dragons look a lot like dinosaurs and have some of the same traits, like claws, tough skin, and horns. 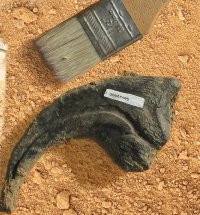 In the early 1800s, people began digging up many of the dinosaur bones that were buried during the Flood. By the 1840s, scientists started calling these reptiles by a new name: dinosaurs, the name you know them as today.

Dig in: Why do some people say dinosaurs lived millions of years ago? They don’t accept the Bible’s true account of history, including God’s creation and the worldwide Flood, just a few thousand years ago. Instead, they trust human ideas about “millions of years,” which aren’t in the Bible.

Next Article Does the Bible Mention Dinosaurs? 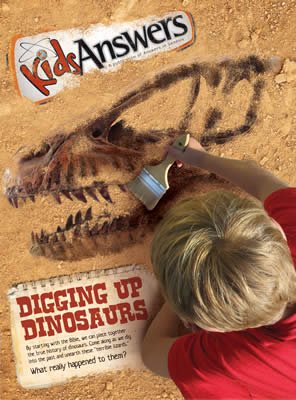 This issue of Kids Answers features dinosaurs, and even includes a pull-out dinosaur poster! By starting with the Bible, we can piece together the true history of dinosaurs.