Kid's articles include, Wilberforce, a strange bird, the design of animals, and snowflakes.

Did Wilberforce say it?

Writers dealing with the famous debate between Huxley and Wilberforce often repeat the story that the Bishop, towards the end of his speech, turned to Huxley and asked whether it was through his grandfather or his grandmother that he claimed descent from a monkey?

J.R. Lucas sums up the evidence for and against this story in a long article in The Historical Journal,1 summarized in Nature.2 He points out that the audience was ‘larger than a full House of Commons’,3 which means that, in the noisy and somewhat gladiatorial circumstances of this debate, not everyone would have heard everything that was said, or have correctly heard everything that was said.

Of Wilberforce’s science, as presented in the debate, he says, ‘These were serious scientific arguments, worthy of a vice-president of the British Association. Darwin acknowledged their cogency.’

He goes on to say, ‘It is doubtful that Wilberforce asked Huxley whether he was descended from an ape. It makes a good story, but Wilberforce had used the first person plural in his review, and the use of the first person is borne out by Wilberforce’s biography and one—admittedly late—account. What Wilberforce may have asked Huxley in the second person is where he drew the line between human descendants and ape-like ancestors, if, as was generally admitted, the offspring was of the same species as the parents. [Reference: Huxley, L, Life and Letters of Thomas Henry Huxley, Vol. i, 185, quoting Vernon Harcourt]…Huxley, however, was ready to answer the question he had not been asked. Three months earlier, in the April issue of the Westminster Review, he had accused the critics of Darwin of making him out to be no better than an ape himself, and since Wilberforce was now criticizing him for being a Darwinian, he must be calling him an ape too.’

It would seem therefore that Wilberforce did not try to ridicule Huxley, but rather the reverse was actually what happened. If so, it gives a very different picture of what really occurred at this famous debate.

In the Amazon forests of South America lives a strange bird called the Hoatzin. It lives beside the river banks and eats leaves and fruit. The mother hoatzin builds her nest in trees or bushes which hang over the water, and when the baby birds hatch, they have claws on their wings! This is very unusual as very few birds have these claws, but to the baby hoatzin they are very necessary.

Sometimes, before the baby birds have learned to fly, another creature attacks their nest. When this happens, the baby hoatzins can jump out of their nest into the water. Then they swim to the bank and climb back into their nest, using their wing claws to help them! Without these special claws they would not be able to reach the nest again and so would probably die.

Where did the hoatzins’ wing claws come from? Did they slowly evolve? This seems impossible, because without them it would be very dangerous for the baby birds to jump into the water, as they would not be able to get back to their nest. And if they were not able to jump into the water how could they escape from their enemies? Those wing claws must have been there right from the beginning, created by God for the birds’ safety.

It is interesting to note that fossils of a bird with claws on its wings have been found. This fossil bird is called Archaeopteryx. Evolutionists say that the wing claws of archaeopteryx show us that birds evolved from reptiles. This is a strange idea as archaeopteryx was a true bird—just as the hoatzin is—and like the hoatzin it must have had wing claws because it needed them! They were not leftovers from any ‘reptile ancestor’.

There is another very interesting fact about the hoatzins: when they learn to fly they lose those special wing claws, because they don’t need them anymore! This looks like some more wonderful planning by God the Creator, not an accident of evolution!

Let the animals teach you!

If we study living creatures and the way they live, we find that each one is perfectly designed for the kind of life it lives—fish for living in the water, land animals for living on the land, birds for flying, and so on. This all points to creation, rather than evolution.

So the evidence of our own eyes tells us that the Bible record of creation is true! And no-one has ever seen evolution happening. Several thousand years ago, a man called Job wrote: ‘Ask the animals, and they will teach you, or the birds of the air, and they will tell you, or speak to the earth, and it will teach you, or let the fish of the sea inform you. Which of these does not know that the hand of the Lord has done this?’ (Job 12: 7-9). Yes, there is plenty of evidence that we have a great and wonderful Creator, and only those who refuse to believe what their eyes see can say ‘There is no God.’

But is this great Creator interested in us? Yes, He loves us! How do we know that? ‘This is how God showed his love among us: He sent His one and only Son into the world.’ (1 John 4: 9). God has come to us in the person of the Lord Jesus Christ, who died on the cross so that the sin which cuts us off from God could be taken away. If you come to God through Jesus, you will be able to look at the world around you and the sky above you, and say: ’The God who made all of that loves ME!’

Tom and Jenny and the Snowflakes

‘Quick, Jenny, it’s snowing!’ shouted Tom. Jenny rushed to her window to see a beautiful, white world. They got ready quickly and started a snowman before breakfast. They hurried to school to join a great snowball fight, so it was an excited group who tried to settle down in the classroom.

‘How is snow different from hail?’ asked Babs, ‘Both are frozen water. Sometimes a raindrop falling through a high cloud gets blown upwards to the cold part and is frozen. As it falls, more water vapour is frozen on it. This may happen several times, and there have been hail stones as big as tennis balls!’ ‘They’d kill you!’ exclaimed Bob. ‘They were one of the plagues that killed the Egyptians’ cattle, weren’t they?’ asked Tom. ‘Yes,’ agreed Miss Wright, ‘but it’s very rare.’

‘Snowflakes are formed when water vapour freezes fast and turns straight into ice in a very cold cloud. Water molecules then form into beautiful, six-sided crystals. They make marvellous patterns, like these—and all of them are different!’ She showed them a photograph of some snow crystals under a microscope.

‘Aren’t they lovely!’ said Jenny. ‘Are they the Treasures of the Snow mentioned in the Bible, I wonder?’ ‘Please let’s get our microscope out and see them,’ pleaded Babs. ‘I don’t think you will see much, but you may try,’ replied Miss Wright.

The class had a small microscope and some hand lenses. They opened the window, caught a fluffy snowflake and put it on a slide. Of course, it melted. They let the microscope get cold and tried again.

‘Stop breathing!’ said Ralph. Babs held her breath. What she saw was beautiful but made of so many six-sided crystals frozen together that the shapes were muddled. Several children tried, but they saw more later when they were allowed to take hand-lenses and black paper out at break. 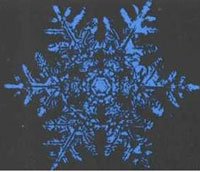 ‘Snow is useful because it is a poor conductor of heat.’ continued Miss Wright, ‘so when it covers the ground it keeps the heat in and protects from frost—just like a blanket.’

‘Two years ago, it stayed frozen so thick on our big oak tree that it fell over,’ said Peter. ‘That’s why most leaves fall off in the winter. In full leaf, snow would uproot most trees. You notice our fir trees have needle-shaped leaves that let the snow slip off.’

After school, Tom and Jenny raced home to finish their snowman. It got much colder, and next day, Peter told them that frost ferns had grown on his window. He lived in a cottage with no central heating or double glazing. ‘The water vapour in your bedroom has frozen to crystals on the cold glass.’ explained Miss Wright. ‘When vapour condenses to water on the edges of grass, we call it dew. When it freezes to crystals, it is frost.’ Several children went to see Peter’s ferns.

Back home, Jenny said, ‘Snow and frost are so beautiful! All those millions of crystal patterns in the snow. Can God see all of them?’ ‘I suppose He can,’ said Tom. ‘No one else can enjoy them all.’ ‘Yes, it’s God who orders snow,’ said Mother. ‘Look at Job chapter 37, verse 6 and see what God says about it.’

This is what they read: ‘He says to the snow “Fall on the earth”. They also read from Psalm 147, verses 16-18: ‘He spreads the snow like wool and scatters frost like ashes.’ They found that wind, hail, rain and frost were all governed by God. ‘But best of all,’ said Mother, ‘because the Lord Jesus came to die for us, God says that “though your sins are like scarlet, they shall be as white as snow”.’ (Isaiah 1:18).

Tom and Jenny will be back in our next Issue.