The Drive to “Keep Boating”

Over the last thirty years, Tom Vail has safely carried several thousand people over more than 55,000 miles of river and rapids, but his spiritual journey has taken him much further than that.

The seasoned Grand Canyon guide, Canyon Ministries founder (www.canyonministries.com), speaker, and author began leading tours as an evolutionist. Once he realized the Bible could be trusted, he found a new passion. “My joy today is being able to share the canyon with fellow believers and see them come closer to the Lord, not by anything I do, but by the evidence they see in the canyon that supports and upholds the Word of God. Just seeing people ‘get it’ as they travel through the canyon is amazing.”

These trips bring adventurers face to face with the history of the world, especially God’s creation and judgment in the Flood. Such is particularly true in Blacktail Canyon—a slot canyon where the basement rock is exposed and the first of the Flood deposits rests on top of it. “You can stretch your hand across the line between God’s creation and His judgment. To me, it is one of the few places where you can really get a small glimpse of just how significant the impact of the Flood was on the earth.” 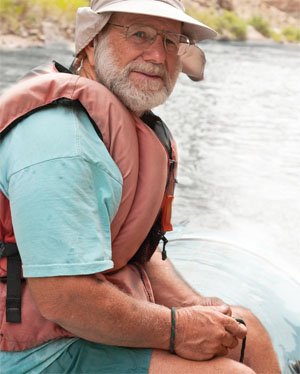 Some of those getting a close-up view of the canyon are pastors, ministry leaders, and seminary professors during an annual Christian Leaders Trip. Nearly one hundred leaders from seven nations—many with old-earth views—have been challenged to understand “how the evidence relates to the Scriptures and, ultimately, the gospel.”

So where does Tom’s journey go from here? That’s a question he can’t answer completely. “As I often say, ‘You are asking the wrong person!’ The Lord has blessed me with health and the physical ability to do these trips, but obviously I’m not getting any younger.”

He’ll keep “boating” for now and expanding his True North series of guidebooks for U.S. national parks. But he’s also got his eye downriver. “I am praying the Lord will bring the right person along to take the helm and steer Canyon Ministries into something much bigger than it is today.”