We see many things in the world which have been built by people, and when we see them we may think that whoever designed and built them was very clever. But what about nature's builders?

Many animals, birds and insects build nests, homes, webs, nets, traps, and many other things. We say that they work by instinct, which means they do not really plan what they do; it is part of their design. Try to find out as much as you can about nature's builders, then ask yourself: 'Whose mind is behind what they do?' 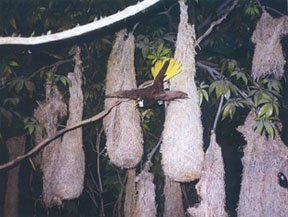 Most birds build some kind of nest to lay their eggs in. Some nests are neatly built from grass and leaves woven together. Do birds learn to build nests? Could nest-building have evolved? It seems that the answer to both these questions is 'No'.

After five generations, the young weaver birds were given nest-building materials — and they began to build a nest at once! The nest was like all weaver birds' nests. Although those young birds had never seen a nest, and had not seen their parents build one either, they were able to build a perfect nest.

This shows that birds were created to build nests from the beginning. 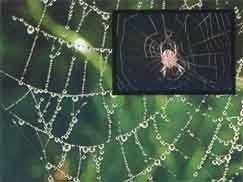 Spiders' webs are found in all kinds of places. We get used to seeing them, and sometimes feel they are a nuisance, but how often do we stop to closely look at them? A spider's web is wonderful; it is very thin, yet the silk it is made from is stronger than steel of the same thickness. Spiders spin their silk and weave it into a beautiful web, which is then used to catch food. The threads of the web are sticky, and strong enough to hold a struggling fly. Spiders often spin long strands of silk, and baby spiders use strands of silk to float many miles to find a new place to live.

Spiders could not have evolved silk-spinning and web-making, and they don't have to learn how to spin or construct their webs. God must have given them this skill, so spiders' webs are His design! 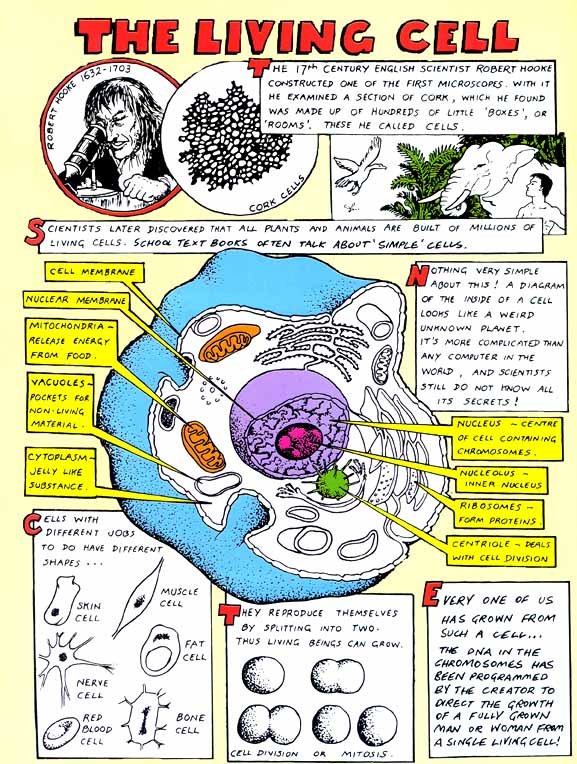 What is the matter with your coats?' cried Mum, as Tom and Jenny came back from a walk with their dog, Rover.

'We found a burdock, and had to battle its sticking burrs', explained Tom.

'Well, pick them off outside', said Mum, 'and look at your socks — they're covered in sweethearts, and so is Rover'. (Sweethearts are the sticky seeds from cleavers.)

They cleaned up, then Tom asked, 'It's great fun, but why do some seeds have hooks?'

Mum answered: 'If all the seeds fell under the parent plant, only two or three would have room to grow, but hooked on animal fur they can be carried a long way'.

'It was burrs that gave someone the idea for making what we call Velcro,' said Mum. 'Jenny, pull your purse open, and press it together again. Now look at it under this magnifying glass.'

They saw lots of tiny hooks.

'Why, even Velcro was God's invention!' exclaimed Jenny. 'We're getting used to saying that!'

'Look under your shoes,' said Mum. 'Tiny seeds get carried around in mud. Charles Darwin once scraped 200 grams of mud from ducks' feet, put it in fertile soil, and got 537 plants!'

'No wonder you make us wipe our feet!' laughed Jenny.

'I supposed the earth was replanted like that after the Flood and other disasters', suggested Tom.

'See if you can discover other ways that seeds spread', said Mum.

Next day, a dandelion seed blew into the classroom. Ralph puffed it along to Bob, who blew it to Tom just before the teacher saw them.

'We're looking for the ways that seeds spread', Tom explained.

'Then look near the playground wall during break', advised Miss Wright.

There they found dandelions, thistles and willowherb, and had a furious game seeing who could blow the 'parachutes' the furthest.

They flicked the wings, marking where they twirled down. Ralph, who was the tallest, won.

'I wonder how far they go from the tree', he said.

Miss Wright suggested they make a collection on the Nature Table. They made separate piles of seeds; those that were food for animals, such as berries, nuts and grain; those that had hooks; those that were 'hitch-hikers' (carried in mud); and those like helicopters and parachutes, and carried by the wind.

Bob and Babs also found seeds that were like 'pop-guns' — gorse seeds that shot out as far as 50 centimetres (20 inches) when the pods burst in the hot sun. They later found other seeds that were scattered by 'explosions', including poppies, snapdragons and Indian balsam.

There was silence, then everyone looked at Tom. Tom laughed, but Bob said, 'No, of course plants couldn't invent it — they can't think. Don't say it, Tom, we know it was God who made all those things to scatter and spread the seeds. But He doesn't mind us playing with them, does He?'

(Tom and Jenny will be back next issue.)

When the time comes to lay her eggs, the female hornbill finds a hole in a tree which will make a good nest. She then does a very strange thing; she fills up the entrance to the hole with mud, often helped by her mate, until only a tiny slit is left. This means she cannot get out of the nest and is a prisoner inside the tree!

There she lays her eggs, and the male hornbill brings her food, which he passes through the slit with his beak. After the young birds have hatched, he brings them food too.

When the young ones are partly grown, the female bird breaks her way out of the hole, to help the male feed the fast-growing young. After she breaks out, the young ones fill the hole with mud again, so that they are still prisoners inside the tree! They stay there until they are strong enough to fly.

It is difficult to believe that hornbills gradually evolved their strange nesting habits. Why would any bird decide to imprison itself inside a tree, and have to depend on her mate for food? And what if the male bird had not known it had to feed its family? It is easier to believe that God created hornbills to do everything right from the beginning.

Have you ever admired a beautiful building or a clever invention? Did you think about the people who built or designed them, and how great it would be to be able to meet them?

Now think about all the wonderful things we see in the world around us; animals, birds, fish, and the clever things many of them do. The Maker of all these things is God. We know that God must be very great and powerful to have created everything so wonderfully, and we can read of His greatness in the Bible. The Bible also tells us that God came to earth in the Person of the Lord Jesus Christ. In Jesus, God was proving that He loves us. He died on the cross for all the wrong things we have done, and if we are sorry for our sins, and receive His forgiveness, we can really know God.

Jesus is the Maker of all things. 'All things were made through Him. Nothing was made without Him' (John 1:3). Have you met Him yet?