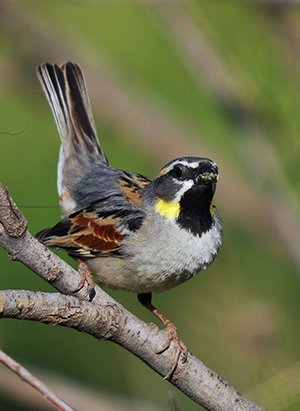 Sparrows are families of birds, belonging to Passeridae (Old World Sparrows) and Passerellidae (New World Sparrows), that come in over 100 species. Most are brown and gray with short tails. Some are as small as four inches while others are seven inches long. As one of the most common birds in the world, sparrows live on every continent except Antarctica.

Sparrows eat mostly seeds. In fact, one species, the chipping sparrow, eats over 70 times its weight in seeds during the winter. But they also eat insects. In fact they are known for helping humans by reducing the insect populations that plague crops. Of course you can also spot sparrows eating French fries and breadcrumbs in restaurant parking lots.

Most sparrows congregate in large groups. Sometimes they bathe and even sing together. In fact, one flock in Egypt included up to 10,000 sparrows.

Just because they’re small doesn’t mean sparrows aren’t tough. In fact, they sometimes drive other birds away from their nests.

Jesus spoke about sparrows in Matthew 10:29–31: “Are not two sparrows sold for a penny? And not one of them will fall to the ground apart from your Father. But even the hairs of your head are all numbered. Fear not, therefore; you are of more value than many sparrows.”

God cares for all of his creation, even the tiniest sparrow. And he cares for you so much more!