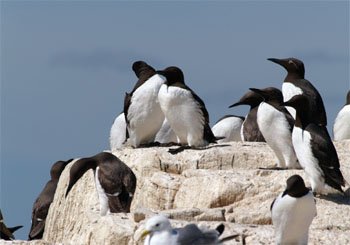 The common murre dives after its food, often to depths of 100 ft (30 m). However, it has been recorded reaching a depth of 550 ft (168 m). Its strong wings propel it through the water and enable it to catch its prey. The common murre does not build a nest. The female lays a single egg on a bare rock ledge, and both parents take turns incubating it. The egg is so pointed on one end that it rolls in a circle if it is pushed. That’s a great design to keep the egg from rolling off the rocky ledge.

Size: 15–17 in (38–43 cm); wingspan between 25–28 in (64–71 cm)
Diet: Mainly fish; but also shrimp, mollusks, and squid
Habitat: Coasts of western Alaska to central California; coasts of Labrador to Nova Scotia; during the winter, mostly offshore