All three species of puffins stand upright and have black and white head and body plumage. They also have brightly-colored bills, mostly yellow and orange. 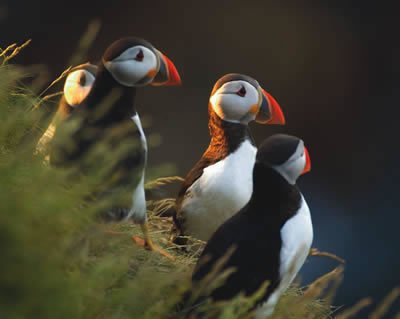 The puffin has a large triangular bill, which is very efficient at catching and holding small fish. It also has a special gland that produces oil, with which it waterproofs its feathers. A puffins can dive as deep as 100 ft (30 m) into the ocean for fish. While underwater it uses its small wings as propellers and its webbed feet like paddles.