Grace and peace to you! I’m Paul, a servant of the Lord here in ancient times. I’ve been traveling around, starting churches and telling people about our amazing God and what Jesus, the Son of God, did for us on the cross.

In my travels, I arrived in a city called Athens, which is in Greece. I decided to walk around the city, and as I did, I started to feel very upset inside because everywhere I went, I saw idols. Do you know what an idol is? Take answers.

An idol is an image or statue of a false god—a pretend god. The Greeks have many false gods that are made by the people. Sadly, the people worship these idols instead of the one true God. Listen as I tell you about a few of them. One is called Cronos. He is said to have hurt his father and swallowed his own children so they wouldn’t become too powerful and take his throne away from him.

Another is Zeus. He is said to be king of the Greek gods. His symbol is the lightning bolt, because he supposedly throws them down to earth in fits of anger. He’s supposed to be the most powerful of the Greek gods.

Next is Nike. She is said to be the goddess of victory. She wants to win so much she’s willing to be unfair and cheat.

And let’s not forget Poseidon. He is said to be the god of the sea. He sinks ships or drowns people on a whim if he wants to. He’s moody and unpredictable. You never know when he’s going to whip up a storm because he’s upset.

These are just a few of the many Greek gods I hear about here.

Seeing all these idols upset me, because there’s only one true God, and I want everyone to know him! So I decided to go to the synagogue, which is like the church Jewish people go to, and talk to them about the one true God. Show the PAUL IN ATHENS POSTER. 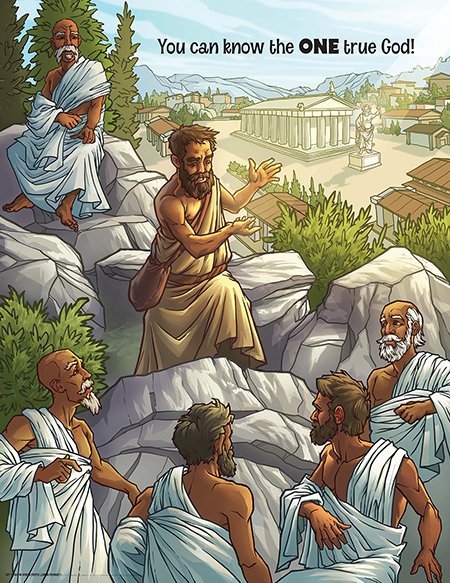 One day, some of the scholars of Athens asked me to come to this rocky spot high up in the city where they have their court. It’s called the Areopagus (air-ee-OP-a-gus). They wanted to know what I’d been telling everybody.

So I said to them: Men of Athens, I see that you’re very religious. For as I passed along, I saw your idols, and even found an altar that said: To the unknown god. Well, what you’re worshipping as unknown, I want to tell you about, because God can be known! He doesn’t live in temples, and he isn’t a statue of gold or silver or stone, but he is God, the Maker of the world! He made it, and he owns it.

And the awesome thing is that if we seek the one true God, we’ll find he’s not far from us, but wants to have a relationship with us. God sent his Son, Jesus, who lived and died and was raised from the dead, so we can have that relationship if we turn from our sins and seek him.

When I finished telling the men this, how do you think they responded? Take answers.

Some made fun of me, some said they’d like to hear more, and some came with me right then and there because they realized I was right—there really is only one true God!

You know, many people consider God a mystery, but he can be known, and he wants to be known. Of course, we’ll never know everything about God—he’s too big and great—but we can know him enough to understand who he is and to have a personal relationship with him. This week, I hope you will not only get to know about God, but also get to know God.

Well, thanks for having me in. Shalom!

This script can be found in the Lighthouse Lessons Primary Teacher Guide, from Mystery Island VBS .

For more information about the life of Paul, please see: