Did a Whale Swallow Jonah?

Did a whale swallow Jonah when tried to run away from God?

When the prophet Jonah disobeyed and ran from God, he ended up on a ship heading as far away from home as he could (Jonah 1).

The problem? You can try to run from God, but He’s everywhere you go.

Jonah’s actions put others in danger from a terrible storm. To save their ship, he had himself thrown into the water. And then a giant sea creature swallowed him.

So, what was this sea creature that gulped down Jonah? The Bible says that God “prepared a great fish” (Jonah 1:17). In the language of Jonah’s day, “great fish” could mean any large creature of the sea. So we don’t know exactly if it was a whale, a large fish (like the enormous basking shark), or some now-extinct animal.

What we do know is that God heard Jonah asking for a second chance while inside the “great fish.” God kept Jonah safe and had the sea creature spit him up on land (Jonah 2) after three days.

Some people claim Jonah wasn’t really inside a fish because they think that no one could survive. But Jesus said it actually happened (Matthew 12:40). In fact, Jesus compared Jonah’s terrible situation to His own death and return to life. We may not know what the name of the big fish was, but we know that the account is true!

Previous Article Is It a Fish? Next Article Whale Gymnastics 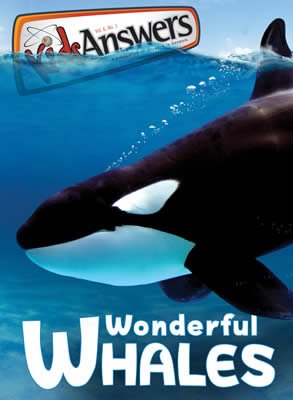 This issue of Kids Answers highlights types of whales, some differences between whales and fish, whale gymnastics, and the experiences of Jonah.