Curious About Life on Mars?

If you have been watching the news lately, you have probably noticed that NASA’s Mars rover, Curiosity, recently landed on Mars. 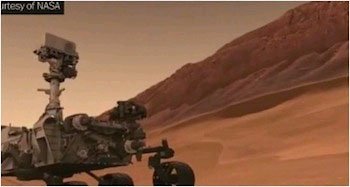 Image from video of the Washington Post’s Marc Kaufman, viewable in its entirety at www.washingtonpost.com

NASA animation showing Curiosity’s planned approach to Mount Sharp where the rover’s laboratory equipment will gather data on the content of the layers. Objective scientific data transmitted back to earth will then require interpretation. Any conclusions about the rock ages will be interpreted in light of assumptions about the age of the solar system.

If you have been watching the news recently, you have probably noticed that NASA’s Mars rover, Curiosity, landed on Mars. Curiosity’s journey covered 352 million miles, and took a little over eight months! Curiosity has been sending a steady stream of pictures and data back to earth.

NASA hopes to find evidence that water or some type of microbial life exists or once existed on Mars. “The rover’s onboard laboratory will study rocks, soils, and the local geologic setting in order to detect chemical building blocks of life (e.g., forms of carbon) on Mars and will assess what the martian environment was like in the past.” 1

Dr. Elizabeth Mitchell, a researcher at AiG, says the following about life on Mars.

Creationist and evolutionary scientists alike are curious about the history of the moon, Mars, and other landmarks in space. . .

The Bible does not say whether God created life on other planets, but the Bible does tell us God created all life on earth during the first six days of Creation week, the same week in which He created the rest of the universe, about 6,000 years ago. Evolutionists generally believe that finding life’s chemical signatures on Mars would confirm life evolved there just as they believe it did on earth. However, no mechanism has ever been observed whereby life could randomly emerge from non-living elements. And if life were ever to be found on Mars, its presence would not prove how it got there. Assuming it was not a contaminant from earth, its existence would just be a testimony to the fact that God could create life any place He chose.

Not even Curiosity’s $2.5 billion dollar price tag can explain life without God. 2

To learn more about the possibility of life on Mars or other planets, please see: