Casts of actual bones of Lucy at Creation Museum

The bones that make up Lucy’s skeleton were found by Dr. Donald Johanson in 1974 in the country of Ethiopia. They were scattered over an area of about 1½ square miles (2.4 square kilometers). When the bones were brought into base camp, the Beatles’ song “Lucy in the Sky with Diamonds” was playing, so they named the bones Lucy. The skeleton is about 40 percent complete. You can see from this picture how much of the skeleton is missing. Do you see any hand bones? Do you see any foot bones? When the bones are all laid out in order, Lucy’s skeleton stands about 3½ feet (1.1 meters) tall.

Some scientists say that Lucy is an ape-man. They claim she could walk upright, and her body was hairy and had human hands and feet. Do we know this is true from the bones that were found? Of course not! But evolution believers are trying so hard to find the “missing link” that will fit into their worldview that they will use a lot of imagination to create a creature that looks half human and half ape.

Now listen to the rest of the story.

Scientists have found other more complete skeletons of the same type of ape that Lucy was, which include hand bones. From them, we can make a pretty safe guess that Lucy’s hands had long, curved fingers suited for climbing in trees. There are no complete hands of Lucy’s type, but she did not have human hands.

From skeletons of Lucy’s kind that have been found with some foot bones, we can make a better guess that Lucy’s feet had toes that could grab things and allow her to be a good climber. She did not have human feet.

Human feet have a large toe that is fixed in place to provide the balance to walk upright (left).
Footbones of Little Foot (Stw 573 skeleton of Australopithecus) show an opposable toe seen in the hand-like feet of apes (right).

Often when evolution believers make a model of an ape-man, they will give the eyes white sclera (the white part of a person’s eyes). However, the scleras of apes are dark brown or tan. Giving an ape-man model white eyes is a small touch that fools us into thinking this ape-like creature really was part human. 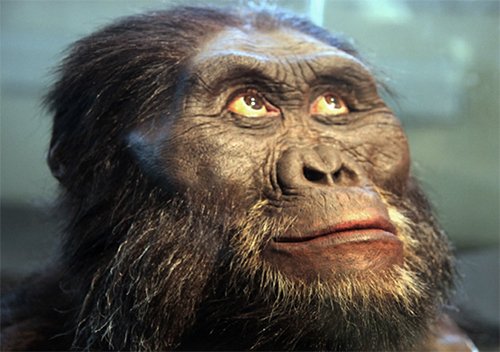 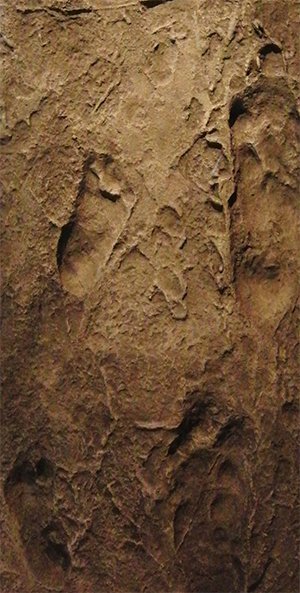 Replica of the Laetoli footprints, National Museum of Nature and Science, Tokyo, Japan.

Evolution believers suggest that Lucy walked on two feet instead of on all four. One of the main reasons they make this conclusion is based on a set of fossilized human footprints found 932 miles (1,500 kilometers) away from Lucy’s bones in the country of Tanzania. They say these human tracks are about as old as Lucy’s bones and are located in a rock layer formed at the time Lucy lived, so they conclude that these footprints must have come from Lucy’s kind. But could there be a better explanation based on the truth about the past? Maybe the human footprints really came from humans when God scattered the people after the tower of Babel building project following Noah’s Flood (Genesis 11). 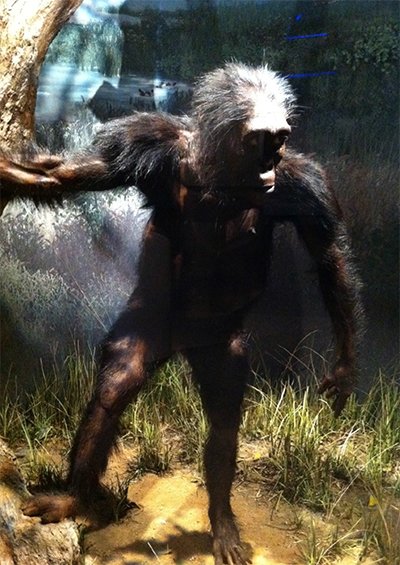 So Here's the Big Question: Is Lucy an Ape-Man? What Do You Think?

I think it’s time for your Bible glasses.
Let’s see what God’s Word has to say.
The Creator made man alone in His image.
No, not in any other way.
So what in the world is Lucy?
It’s plain for all people to see.
When we look through Bible glasses,
she’s like a chimpanzee. 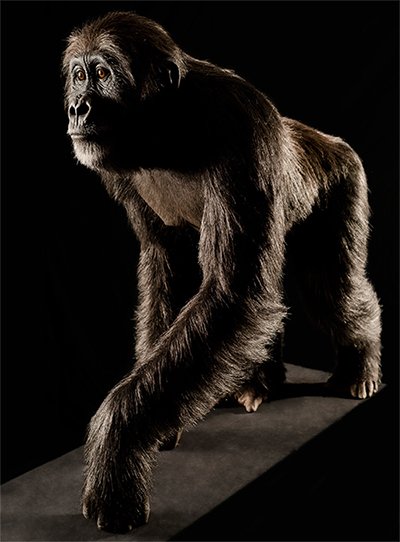 Representation of Lucy at the Creation Museum

Previous Article What Is an Ape-Man? Next Article Neanderthal (Homo sapiens neanderthalensis)