(The King is recording his thoughts in his journal.)

KING CHRISTOPHER: King’s journal, 14th day of September, in the Year of our Lord, 1451. Today, for the first time since I’ve been away, I feel the need to return to King’s Manor. Whether or not the Princes have had enough time to experience the responsibility of governing a kingdom, I sense an urgency to get back to the castle. I hope that it has not been unwise to leave King’s Manor without a king, but I have prayed for God’s protection. I know I can trust Him, no matter what happens.

(As the lights come up, GWENDOLYN is reading from the large Bible on display in the Great Hall. Meanwhile, a distant door pounding sound [sfx] is heard. Soon MORINDA enters the Great Hall.)

MORINDA: (looking around, happy) Even after being gone for twenty-five years, I remember this place so well. Every room . . . every staircase . . . every little nook is riveted in my memory.

GWENDOLYN: Where is that pounding sound coming from?

MORINDA: Oh . . . it’s just Ida. I guess she doesn’t like being locked in her bed chamber (as she holds up a key on a chain and smiles). But we can’t have her getting all excited and running off to tell Sir Gavin, now can we?

MORINDA: No . . . it’s much better for all of us if she stays right where she is. (as she hangs the key around her neck).

GWENDOLYN: What do you plan to do with her?

MORINDA: I haven’t decided yet.

MORINDA: What are you looking at?

GWENDOLYN: Yes . . . and it’s quite interesting.

GWENDOLYN: Well . . . maybe you should. Listen to this: “For God so loved the world that He gave His only begotten Son, that whoever believes in Him should not perish but have everlasting life.”

GWENDOLYN: And then it says, “He who believes in Him is—

MORINDA: (pause, then tries to comfort GWENDOLYN) I don’t mean to get upset, my dear, but overthrowing a kingdom can be quite stressful, as you can imagine. Let’s talk about something else, shall we?

MORINDA: How ‘bout the castle? It really needs an evil queen’s touch, don’t you think?

MORINDA: Yes . . . I’m thinking cobwebs would be a nice effect. (pause) And we’ve got to cover these windows. There’s just too much LIGHT around here!

GWENDOLYN: I kinda like it. I’m tired of walking around in darkness.

MORINDA: Well, I DON’T like it! It makes me uncomfortable! This is going to be my throne room, so it’s got to be dark and dreary!

GWENDOLYN: As you wish.

MORINDA: Say, what’s gotten in to you?

MORINDA: You seem different all of a sudden.

GWENDOLYN: (half-hearted) My only wish is to serve you . . . my Queen.

GWENDOLYN: You mean the gold?

MORINDA: Yes, the gold. I know they’ve got a big stash somewhere.

GWENDOLYN: (having had a change of heart, she makes up an answer, trying to protect the king’s gold) Oh . . . um . . . they keep it in the dragon chamber. Didn’t you hear what the princes said?

MORINDA: The dragon chamber . . . how clever. No one would dare go in there (as she walks over to the window to look at the dragon chamber). Unless, perhaps, the dragon was asleep . . . and you were really, really quiet. Or, better yet . . . my knights could just do away with the wretched beast. (pause) Which reminds me . . . (as she looks out the window, straining to see any sign of her evil knights) . . . what could possibly be taking them so long?!

GWENDOLYN: (anxious to leave) Your grace . . . let me go to the courtyard and watch for your knights while you wait here.

MORINDA: Very well. You may go.

(GWENDOLYN exits the Great Hall and proceeds to the courtyard.)

MORINDA: Someone’s going to have some explaining to do. That’s for sure! (as she positions a chair to serve as her temporary throne and then sits down).

GWENDOLYN: Oh, this is awful. What am I going to do?! She’s got to be stopped, but how?! And then there’s the king. If someone doesn’t warn him, he’ll return unaware and walk right into a trap! I’ve got to find Sir Gavin!

MORINDA: (impatient, she gets up from her chair to look out the window) Six of my best knights against two incredibly helpless princes! It should be “child’s play!” (then her emotion suddenly changes to pleasure as she sees men in the distance approaching the castle) Oh, I say . . . what do I see? Have they finally arrived? (evil snicker as she returns to her “throne” with great anticipation) Well, they can attend to me at my new throne . . . in my new castle . . . in my new kingdom. (evil laugh) Let the party begin!

(The PRINCES and SIR GAVIN enter the castle and proceed to the Great Hall.)

MORINDA: (“bolts” forward in her chair, horrified, almost speechless) What??!!

PRINCE ROBERT: (excited) We didn’t find The Evil Queen Morinda, but we took care of some really bad characters, whoever they were.

PRINCE RICHARD: Yeah . . . and until Gavin got there, it was two against six! So thanks for sending Ida to get him.

SIR GAVIN: What are you talking about? Ida never came to me.

(Overcome with shock, MORINDA finally faints. Then IDA enters from the side, proceeds through the courtyard and then into the castle.)

PRINCE ROBERT: Then how did you know to help us?

PRINCE ROBERT: (amazed at the thought) Wow . . . that is amazing.

(IDA barges into the Great Hall.)

IDA: Aha! Thought you had me, huh? Well . . . you forgot about bed sheets! You know, it’s a wonder I didn’t fall and break my legs . . . or worse! Now which one of you troublemakers locked me in my bed chamber?! (then she notices MORINDA unconscious in the chair) Oh . . . what happened to her?

IDA: Just fainted, you say? Probably some dreaded disease going around . . . smallpox, more than likely. (she feels MORINDA’S forehead) Hmmm . . . her forehead’s cool, but that’s nothing to go by. You know, this kinda reminds me of the time when—

SIR GAVIN: (annoyed at her pessimism, he cuts her off) Ida . . . why don’t you get the smelling salts.

(IDA leaves the room to get the smelling salts.)

PRINCE RICHARD: (to ROBERT) Don’t tell her about our little skirmish.

SIR GAVIN: What did you say her name was?

SIR GAVIN: (puzzled) I’ve never heard of her. Where’s she from?

PRINCE RICHARD: I don’t know. Some country far away.

SIR GAVIN: (a little suspicious) I wonder if she really is who she says she is.

PRINCE ROBERT: (concedes poor judgment) Hmmm . . . it probably wasn’t the best idea to just let them in here, was it.

PRINCE ROBERT: Yeah . . . she had a lady-in-waiting with her. I think her name was Gwendolyn. Wonder where she is?

SIR GAVIN: (a bit frustrated) As I’ve been trying to tell you both . . . you must keep your guard up and never let it down. Have you been reading the Bible?

SIR GAVIN: Because the battle is primarily for your heart and your mind, so you’ve got to know the truth of God’s Word inside and out. Otherwise, you’ll be open to doubts and deceptions. Remember . . . the Enemy is a master deceiver and the father of all lies . . . and he wants to mess up your life.

PRINCE RICHARD: (finally convinced) This is serious stuff, isn’t it.

SIR GAVIN: Yes, it is. And that’s exactly why you have to put God’s special armor on every day.

PRINCE ROBERT: You know . . . I think I’m ready to make some changes in my life.

IDA: Finally found them. There’s no expiration date, so they’re probably too old. (holds it up to her nose) Wooooeeee! If that doesn’t wake her up, nothing will! (suddenly notices ROBERT’S arm in a sling) Hey . . . what happened to you? (as she inspects his arm) Did some war start that I didn’t know about?

IDA: Just a scratch, huh? Well, scratches lead to infections and infections lead to—(then, finally notices the state of their clothes) and just look at your clothes! What on earth am I going to do with you two?

PRINCE RICHARD: Ida . . . you’re the best! What would we do without you?

(SIR GAVIN waves the smelling salts under MORINDA’S nose. She startles and then opens her eyes.)

MORINDA: (waking up, trying to focus, sees the PRINCES and remembers her displeasure) Oh . . . it’s you.

PRINCE ROBERT: (to MORINDA) How are you feeling?

MORINDA: (sarcastic, nasty) Just peachy! How are you?

IDA: (defensive) Now, wait just a minute, honey. That’s a prince you’re talking to, so I suggest you simmer down a bit! You may be queen from who knows where, but you’re not queen of this castle!

MORINDA: (speaks in a rather weak voice) How could this happen?

SIR GAVIN: You know, there are some strange things going on. Just to be safe, I think we’d better have a look around.

SIR GAVIN: Ida, you stay here while we search the castle.

SIR GAVIN: (a bit suspicious, to IDA) Keep your eye on her. If she gives you any trouble, send for us immediately.

SIR GAVIN: We’ll be back shortly. (to the PRINCES) C’mon, let’s go!

(SIR GAVIN and the PRINCES leave the Great Hall.)

MORINDA: (as she moans) Oh, go away and leave me alone.

IDA: I’d be glad to . . . but I told Sir Gavin that I’d keep an eye on you. (with sarcasm) Who knows . . . you might faint again, and we CERTAINLY wouldn’t want you to hit your head on something.

MORINDA: (pause as she suddenly realizes she needs to get away; she tries to get IDA to leave the room) Oh . . . well, then . . . maybe I do need to eat something. I’m sure that’s why I fainted. I was just hungry, that’s all. Did you say you had some mutton?

MORINDA: (concerned, she quickly stands up) I’ve got to get out of here! As soon as they find out who I really am, they’ll lock me in the dungeon and throw away the key. (then vengeful) Oh, but they haven’t seen the last of me! No, sir! I’ll be back, and next time I WON’T fail! (pause) But wait . . . (stops, demeanor changes) I mustn’t let this trip be a total loss. No . . . let’s see about that treasure first. It would be a terrible shame to leave empty-handed, now wouldn’t it?!

(MORINDA walks quickly out of the Great Hall, out the front door of the castle, and over to the dragon chamber.)

(FLAME grunts [sfx], then IDA emerges from the front door of the castle. He grunts [sfx] again, and then lets out a tremendous roar [sfx]. Then out of the dragon chamber comes MORINDA. Her hair is wild and standing straight out, and she’s screaming in terror. As IDA stands nearby, MORINDA runs around the stage for a few brief moments and then up the center aisle and out of the auditorium.)

IDA: (ecstatic) And don’t EVER come back! (as she goes over to close the dragon chamber) Way to go, Flame!!

When Morinda bursts from the dragon chamber, she should bear the effects of coming face-to-face with an angry fire-breathing dragon. Have someone stationed inside the dragon chamber who can quickly help Morinda with her hair and face as soon as she enters. Use brushes and hairspray, as necessary, to achieve wild hair or have a wild wig prepared and ready to slip on. Then, quickly apply a few streaks of black make-up to her face. Be sure to practice this prior to VBS. 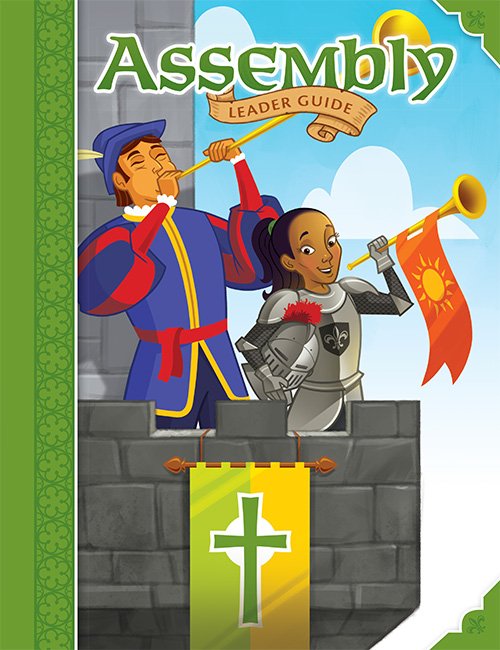 Put on the full armor of God so you can stand strong in the battle for truth.