(Jungle sounds [SFX] playing. Continuing where the story left off, RAINA, JESS, MOOSE, and BUDDY are still looking for MYLES. RAINA and JESS enter the auditorium from the back left.)

RAINA: This is NOT good.

JESS: I know. What are we going to do?

RAINA: Just keep looking, I guess. We’ve got to find him. (pause, then to herself) Oh, Myles, where on earth could you be?

(Then BUDDY enters the auditorium from the back right. He’s found a walking stick and is super excited about it. He plays with it as he approaches the stage.)

BUDDY: No . . . but I did find this really cool walking stick! It’ll come in handy when we get back in the race.

BUDDY: Stuck in quicksand. (as he continues to play with the stick)

JESS AND RAINA: What??

RAINA: And you just left him there??

(JESS and RAINA look at each other in disbelief.)

RAINA: Yeah, how stuck is he? Just his shoes or what?

JESS: Waist! Are you kidding??

RAINA: Where is he?!

(JESS and RAINA take off running up the aisle toward the back right of the auditorium, with BUDDY following.)

BUDDY: Hey! Wait for me!

RAINA: (to BUDDY) I can’t believe you left him there!

JESS: I just hope it’s not too late!

(As soon as they exit the auditorium, MYLES comes sauntering down the center aisle toward the stage. He didn’t hear their calls because he’s been wearing headphones and listening to music. As he nears the stage, he removes them.)

MYLES: (despairing) I can’t believe this is happening to me. I should be home right now, driving my Lamborghini, but instead, I’m stuck in this hot, miserable, bug-infested zoo with a bunch of common people. I don’t deserve this.

(As he walks up onto the stage, he sees the food cart.)

MYLES: So, what do have here? Figures. (he picks through the food options) . . . chips, pretzels, cookies . . . of course they wouldn’t have any real food.

(He grabs a bag of chips, finds a place to sit down, opens the bag, and begins eating. Then it dawns on him that nobody is around.)

MYLES: Hey, where is everyone? (he gets up and has a look around) Hello? (pause) They’re probably napping in the plane. (he exits briefly to check the plane) Hello? (then he returns to the stage) They better not have left without me. (pause) I’ll bet that’s exactly what they did. They probably tricked me into taking a walk, so they could take off as soon as I was out of sight. That’s just what they’d do. You know, you try to be nice to people, and then this is the thanks you get. Well . . . they’re not going to get away with it!

(Then he sees JESS and RAINA enter the rear of the auditorium.)

(MYLES walks to the edge of the stage, crosses his arms, and waits with a scowl on his face.)

MYLES: Where have you been?!

RAINA: Yeah . . . and because of you, we almost lost Mr. Moose in quicksand!

MYLES: (still skeptical) And where is he now?

JESS: Changing clothes. You can imagine how dirty he was.

RAINA: So, where were you?

RAINA: And you didn’t hear us calling you??

MYLES: How could I? I was listening to music.

(MOOSE and BUDDY enter from the rear of the auditorium. MOOSE is carrying his dirty clothes and boots while BUDDY has his new walking stick.)

RAINA: Okay. From now on, you can’t leave without telling us where you’re going. Is that clear?

RAINA: Is that clear??

MYLES: I guess. (pause) You know, it’s not my fault we’re stuck here. If that pilot of yours knew how to fly a plane, we wouldn’t be in this mess!

JESS: (to RAINA, to keep her calm) It’s okay. Don’t listen to him. (then she sees MOOSE and BUDDY) Here they come.

RAINA: I’m going to go get some water.

(RAINA returns to the plane to get some water bottles.)

MOOSE: Oh, good. (to MYLES) We were worried about you.

MYLES: Well, you didn’t need to be. I can take care of myself, thank you very much.

JESS: Are you sure you’re okay?

MOOSE: (exhausted) Yeah. I just need to sit down.

(MOOSE and BUDDY sit down near MYLES.)

MYLES: Did you really get stuck in quicksand?

BUDDY: He thought he was a goner.

MYLES: No thanks. I’ll pass. (as he gets up and walks away)

(RAINA returns with some water bottles and begins to pass them out to everyone.)

RAINA: Everyone needs to drink some water.

(MYLES refuses to take one. Then BUDDY leans over to MOOSE and whispers something in his ear. They both laugh. They have a trick up their sleeves to get MYLES back for leading them on a wild goose chase.)

(MOOSE and BUDDY’S laughing, facial expressions, and glances at MYLES make it obvious to the rest that they’re up to something. RAINA and JESS watch it unfold.)

BUDDY: Oh, no . . . there’s something in my water. (as he looks in his water bottle pretending to see something at the bottom)

MOOSE: What? Let me see.

MOOSE: I don’t see anything.

BUDDY: You gotta get closer. You gotta put your eye right down on the bottle.

MYLES: (not fooled at all, he plays along) What do you want me to do?

BUDDY: It’s easy . . . you just look inside the bottle and tell me what you see. Understand?

MYLES: I think so. But can you show me first?

BUDDY: Sure. You just put your eye right down on the bottle like this.

BUDDY: (to MOOSE) What are you laughing at?!

MYLES: (to BUDDY) I go to boarding school, so I know every prank in the book. (then he starts to leave)

RAINA: Where are you going?

MYLES: Don’t worry, I’m not sneaking off. I’m just going back to the plane. I’ve got a headache.

JESS: You know, since it looks like we may be here for awhile, we probably ought to gather some firewood.

RAINA: Good idea, but does anyone know how to start a fire? I sure don’t.

JESS: That’s not a problem. I can do it.

BUDDY: How do you know so much about everything?

JESS: I really don’t. It’s just that I’ve been studying about the jungle for the past four years.

RAINA: Really? Why is that?

JESS: Because I want to be a missionary in the Amazon.

MOOSE: Not that Amazon, silly.

BUDDY: You mean there’s another one??

JESS: There sure is. The Amazon I’m talking about is the largest tropical rain forest in the world, and there are millions of people who live there.

BUDDY: (defensive) I was just asking a question.

(MOOSE pushes BUDDY along as they exit back stage right.)

JESS: (to RAINA) You’re probably wondering the same thing, but it’s not about where I want to live—it’s about what I want to do. And I’m convinced that the best thing I can do is tell people about the one true God and his love for the nations. He wants everyone to hear the truth, no matter where they are.

RAINA: But what if they already have a religion?

JESS: Different cultures and customs can be a really good thing. There’s no question about that. But, when it comes to spiritual things, there’s only one way and that’s God’s way as described in the Bible.

RAINA: Okay, I can accept that. Which reminds me of something you said earlier. Something I’m confused about.

RAINA: You said we all came from Adam and Eve . . . but if that’s true, and we’re all related, why do we look so different? And how did the tower of Babel have anything to do with it?

JESS: Granted, we may look different because of the shade of our skin or the shape of our eyes, but really, we’re not as different as you think. Genetics can easily explain how differences develop when you separate people and split up the gene pool . . . and that’s exactly what happened after the tower of Babel.

RAINA: I guess I should have paid more attention in biology class.

JESS: I know. It gets technical, but the point is . . . there may be a variety of people groups and cultures, but there’s only one race . . . the human race. And that’s why God loves EVERY nation, people, tribe, and language, no matter who they are, where they come from, or what they look like.

JESS: I know. And that’s why I sometimes call it, “The History Book of the Universe.”

(Then MOOSE enters, followed by BUDDY, each with an armload of firewood.)

MOOSE: I know . . . but I just think it’s gonna give us an edge and help us win the race if we keep quizzing each other. We gotta be sharp mentally, too, you know. (pause) C’mon . . . just one more question.

MOOSE: Okay. This might be a hard one, so listen carefully. What’s the largest country in South America?

MOOSE: (looks out at the audience with a surprised look) Wow! Good job! I didn’t think you’d get that one! See? You do know some geometry! (then walks toward JESS) We got your firewood.

JESS: Thanks, guys. You can set it down right there.

MOOSE: It is? Where?

BUDDY & MOOSE: (they look at each other in horror, then scream) SNAAAAAAKE!!!!!

(Hysterical, they both drop their sticks, then MOOSE flings the snake into the audience.) 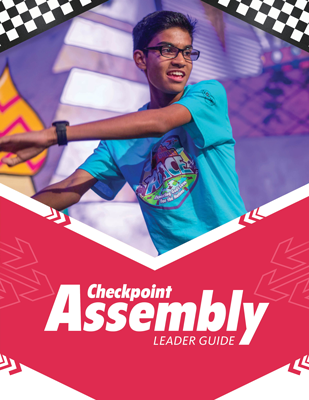