(Scene begins with a rooster crow [sfx] as THEODORE emerges from the Sheriff’s Office with an old worn out white bed sheet and a newspaper. He yawns and stretches, then walks to a chair in front of the Sheriff ’s Office and sits down. Then he drapes himself with the sheet, and begins to read his newspaper. After a few moments, OTIS emerges from behind the Sherif ’s Office carrying a galvanized washtub with water in it.)

THEODORE: (as he looks up from his paper and sees OTIS) Otis . . . have you lost yer mind? I said I wanted a haircut, not a bath!

OTIS: (as he sets the tub of water down a few feet in front of THEODORE) I know’d what ya said, Theodore. I got ears, ya know.

THEODORE: Then what’re ya doin’ with that tub a water?

OTIS: (with enthusiasm, as he takes hold of one of THEODORE’s boots) I’m gonna soak yer feet in it!

THEODORE: Oh, no you ain’t! (as he tries to jerk his foot away from OTIS, but can’t).

OTIS: (with his back to THEODORE, straddling his leg and holding onto the boot) Yes, I am!

THEODORE: No, you ain’t!

(They continue to struggle back and forth until THEODORE finally uses his other foot to push OTIS away. As OTIS falls forward, he quickly grabs the sides of the washtub and catches himself just before going head first into the tub of water. His hat falls in, however.)

OTIS: (looks up to the audience, with relief) Whoa! That was a close one! (looks down and sees his hat in the water) Aww . . . now look whatcha did. (retrieves his hat, which is full of water, and promptly puts it on, drenching himself, then slowly turns toward THEODORE)

THEODORE: Well don’t blame me. I told ya I didn’t want ya to soak my feet.

OTIS: (offended, he turns away from THEODORE) But I thought you’d like one a them fancy spa treatments like the rich folks get back East. (pause) I was jus’ tryin’ to do somethin’ nice fer ya. (his voice starts to crack as he gets choked up) You bein’ my bestest friend and all.

THEODORE: (as he starts to untie one of his boots) I’m takin’ my boots off, ain’t I?

OTIS: (regains his original enthusiasm) Theodore, yer gonna love this. I guarantee! (notices THEODORE’s holey socks) Hey . . . why you wearin’ yer best socks? I thought you was savin’ those for yer weddin’.

THEODORE: I got tired a waitin’. Besides . . . who’d wanna marry someone like me, anyhow?!

THEODORE: (hopeful) Really? Ya think so?

(He quickly unties his other boot as OTIS moves the tub of water into place. Then THEODORE puts both feet in the water while OTIS gets his supplies from under the chair.)

THEODORE: Aaah . . . that feels real relaxin’ Otis. I could sure git use to this!

OTIS: Okay, Theodore, now tilt yer head back an’ close yer eyes. (as he applies a thick layer of mud mask to his entire face) This stuff is supposed to make yer skin real soft . . . jus’ like a baby. (as he puts cucumber slices over his eyes) An’ these cucumbers’ll make yer eyes all bright and sparkly! (realizes he forgot the hair cream) Oops, I forgot somethin’. You jus’ hold tight ‘til I come back.

(As OTIS quickly exits into the Sheriff’s Office, SADIE emerges from her kitchen holding a new sign for her café. As she proceeds to install the “GOOD NEWS” sign over the “HARD TIMES” sign, she notices THEODORE.)

SADIE: Mornin’, Sheriff . That looks like some shave yer gettin’.

THEODORE: (without raising his head, a bit embarrassed) This is Otis’s idea. I’m jus’ goin’ along with it, that’s all.

(OTIS emerges from the Sheriff ’s Office with a big bowl of shaving cream.)

OTIS: (excited) How ya doin’, Theodore?

(PETUNIA, with her suitcase, enters from the rear of the auditorium and proceeds toward the stage. When she walks up onto the stage and sees THEODORE, she stops and stares.)

THEODORE: (becoming anxious) Fine, but hurry up. People are gonna start walkin’ by and sayin’ things.

OTIS: (as he smears shaving cream all over THEODORE’s head and tops it off with some baby powder) Oh . . . you mean embarrassin’ stuff , like . . . “Hey, sheriff , ya need some bubble-bath?” or, “Hey, sheriff , would ya like some rose petals?”

THEODORE: (getting angry) Would you hush up!

(Finally, OTIS notices PETUNIA standing nearby with a smile on her face.)

PETUNIA: (as she laughs) That’s really funny! Does he know you’re doing that to him?

(THEODORE stomps off through the Sheriff’s Office in his bare feet and with the cape still fastened around his neck.)

OTIS: (as he watches THEODORE leave) But . . . but what about yer haircut??

(Discouraged, OTIS picks up THEODORE’s boots and walks back to the Sheriff’s Office. Meanwhile, PETUNIA seats herself at the café, and SADIE comes to wait on her.)

PETUNIA: Yes, I’d like a piece of cinnamon swirl raisin bread lightly toasted on one side only, please.

SADIE: Sorry, miss, but we’re not that fancy around here. All we’ve got is plain sourdough.

PETUNIA: (as she ponders) Well . . . I’m usually not the type of person who throws caution to the wind, but . . . I don’t mind taking a little chance now and then. (short pause) Okay, plain sourdough it is!

SADIE: So, is that all? No eggs or bacon? You know, lunch isn’t for four more hours. I wouldn’t want you to go hungry.

PETUNIA: (almost giddy with excitement) Uh-huh . . . and not too much!

SADIE: Okay. One piece of buttered toast, comin’ right up!

PETUNIA: You know, I really like the name of your restaurant . . . ”The Good News Café.” Good news is SO much better than bad news, don’t you agree?

SADIE: I sure do. But that’s not referrin’ to just any ole’ good news. It’s the good news of Jesus Christ.

PETUNIA: Oh, I love the Christmas story with baby Jesus and the North Pole and the reindeer and everything!

SADIE: Sounds like you need to read the story again. Have you got a Bible?

SADIE: (as she grabs a Bible and hands it to PETUNIA) That’s okay . . . I’ve got one for you. I like to give them out to people.

SADIE: Don’t mention it. You’ll find the Christmas story in the New Testament.

PETUNIA: Thanks. I love a good bedtime story before I go to sleep.

SADIE: (becomes excited) Oh, but it’s not just a story . . . Mary and Joseph traveling to Bethlehem, the angels and the shepherds, the star, the wise men coming to worship Him . . . all that really happened, you know!

SADIE: Yeah . . . and what’s even more amazing is that lots of it was foretold hundreds of years before it happened! There’s never been a birth like it!

PETUNIA: I guess I’ve never really thought about it that much.

SADIE: I know . . . I didn’t either until recently, I’m sad to say. But, then I found out that Jesus isn’t just a baby in a manger; He’s the King of the whole universe. So now I just want to treat Him like a King, ‘cause that’s what He deserves. (pause) Oh, well . . . I better stop talkin’ and get your breakfast.

(As SADIE exits to the kitchen, PETUNIA tries to think of something to say.)

(As she waits for her breakfast, PETUNIA pulls a mirror and other supplies out of her purse to check her hair and make-up in anticipation of her upcoming audition. Then SADIE returns with the toast.)

PETUNIA: Oh, yes, and I have a VERY good feeling about this one. The judges are going to be enthralled by my performance and then—VOILA!—fame and fortune will be just around the corner!

PETUNIA: Yes . . . the name Petunia Periwinkle is about to become a household word!

PETUNIA: (excited) You’ve heard of me?!

SADIE: So, how many auditions have you had?

PETUNIA: (becomes concerned) Why? Is that a lot?

PETUNIA: Hmm . . . that IS a lot, isn’t it. I should have been discovered a long time ago. I wonder what the problem is? (short pause) Maybe it’s because they never let me finish. During my last audition, they stopped me right in middle of my song and said they’d never heard a voice quite like mine. But then I asked myself, if they were enjoying the song so much, why didn’t they let me finish? Show business is so hard to figure out sometimes . . . don’t you think?

SADIE: I guess so.

PETUNIA: Oh, but one of the judges gave me some advice. He said I should go somewhere far, far away, where folks might appreciate my unique gifts. And that’s why I’m here. Now wasn’t that nice of him to help me like that?

SADIE: (figuring that PETUNIA must not be very talented after all) Oh, yes . . . and it sounds like he knew what he was talkin’ about. So . . . did you come in on the stagecoach this mornin’?

PETUNIA: Yes, and you know what? It’s a very long trip from Ohio!

PETUNIA: Really. I was never very good at biology.

SADIE: So where you stayin’?

PETUNIA: Nowhere yet. Where would you suggest?

PETUNIA: Boarding house? But what about a hotel?

SADIE: Oh, there used to be a real nice one, but it burned down three years ago.

PETUNIA: (becomes discouraged) No hotels? (she stops to think) But . . . but there are theatres and restaurants, right?

SADIE: (laughs) Honey, if you were wantin’ New York City, you shoulda headed east, not west!

PETUNIA: But I thought San Francisco had all those things!

SADIE: San Francisco! This isn’t San Francisco, it’s Discovery City! I’m afraid you got off at the wrong stop.

PETUNIA: (confused) Discovery City? (confusion turns to horror) Discovery City?! Well . . . I’ve got to get back to the station right away! (she quickly grabs her belongings and heads for the door taking the tablecloth and everything on it with her) Oh . . . now look what I’ve done!

SADIE: Forget about it. I’ll clean it up.

PETUNIA: Oh, thank you. You’ve been so kind.

(PETUNIA quickly exits the café and runs toward the rear of the auditorium.)

SADIE: Oh! But there’s just one problem. The stagecoach only comes through once a month!

(PETUNIA suddenly stops, slowly turns around, and then walks back to the café.)

PETUNIA: That’s what I thought you said (at that, she promptly faints). 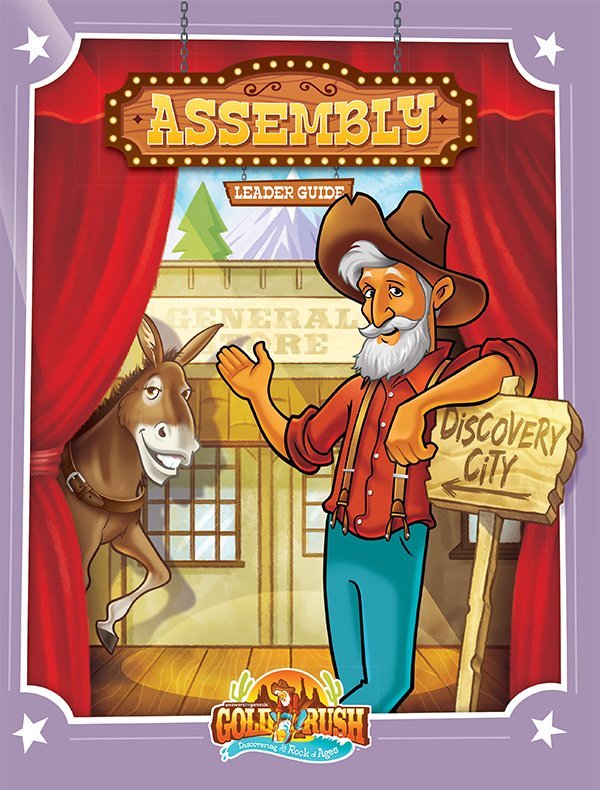 We’re headin’ to the Old West to search for true gold and discover the answer to the most important question ever asked: “Who is Jesus of Nazareth?”