“By the word of the LORD the heavens were made, and all the host of them by the breath of His mouth” (Psalm 33:6).

There are a number of different ways to figure out how old an object is. 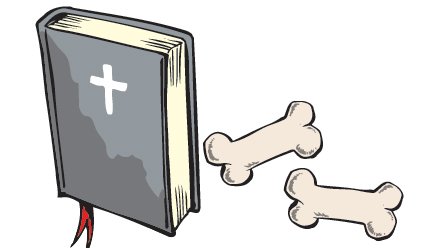 Of course, the best method is to check the account of a reliable eyewitness, if one is available. The Bible is such a record. Since it is the Word of God, we can trust it to tell us the truth about the past. Carefully studying what the Bible says, we find that the universe has an age of around 6,000 years, and that a world-changing, global Flood occurred about 4,300 years ago.

Those who don’t accept the biblical account of history look for other ways to figure out the age of things. One of these methods is based on a substance found in all living things—it’s called carbon.

There are two basic forms of carbon: one that occurs naturally, called carbon-12 (12C), and one that forms from processes acting on nitrogen in the atmosphere, called carbon-14 (14C). Both of these combine with oxygen to form carbon dioxide (CO2), which we breathe out and plants “breathe” in. When a cow eats grass, its body absorbs the carbon (both 12C and 14C) in the plant.

When the cow dies, it stops taking in carbon (for obvious reasons). The amount of 12C in the cow’s body stays the same after death, but the amount of 14C changes because it returns to nitrogen.

As time goes on, the amount of 14C continues to decrease until nothing is left, which is supposedly about 50,000 years later.

When a paleontologist (a scientist who studies bones) finds a bone (or a piece of wood), she can measure the amount of 14C and 12C it contains. Based on how much 14C is left, she can supposedly calculate when the animal (or plant) died.

Sounds like a good idea, doesn’t it? But there’s a problem.

There are many things that affect how much 14C an animal (or a person or plant) has in it when it dies. This changes how long ago the animal appears to have died.

For instance, plants don’t take in as much 14C as scientists expect. So, after they die, there is less 14C in the plants to change back to nitrogen. This makes the plant appear to have died many more years ago than it actually did (for example, the plant might appear to be, say, 3,000 years old, rather than 2,000).

Also, the amounts of 14C and 12C in the atmosphere haven’t been constant throughout history (for instance, Noah’s Flood lowered the total amount of available carbon by burying lots of animals and plants, while the atmosphere continued to produce 14C). So something that lived (and died) when the proportion of 14C was less than normal would appear to have died more years ago than it actually did (for example, it might give an age of 3,000 years before the present, rather than its true age of 2,000 years).

Even many archaeologists don’t think “carbon dating” is completely accurate all the time.

When these (and other) problems are taken into account, a scientist can interpret the result of the carbon dating within a biblical time frame, but even so, these results can not be used to prove the age of once-living things.