Our World (Answers for Kids): Animals in Disguise

Have you ever dressed up and pretended to be someone else, or played 'hide and seek'? Children, of course, do this, but there are also many living things that do this to avoid being attacked or eaten. These include fish, birds, insects, and even flowers.

Insects are masters of disguise. Their main enemies are birds, but insects which are hard to see are less likely to become a bird's breakfast. Some insects look like the sticks or leaves of the plants they feed on. The butterflies in the photos below are not easily spotted by hungry birds. 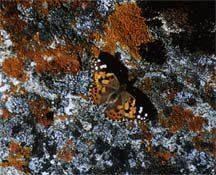 Some insects and other creatures wear a disguise which actually frightens birds away. Most small birds are afraid of owls, and one insect has a clever way of scaring birds away.

The owl butterfly has large 'eyes' on its wings. These shapes cannot be seen when it is resting, but if a hungry bird comes along, the butterfly spreads its wings to show the two eye shapes.

The bird is suddenly reminded of its own enemy, the owl, and flies away.

The caterpillar to the right also has large 'fake' eyes to scare birds.

Evolution cannot easily explain how these creatures got their clever camouflage and disguises. Even if they could think about it, they certainly could not change the way they looked. There had to be a mind behind it all, and this was the mind of God, the Creator. 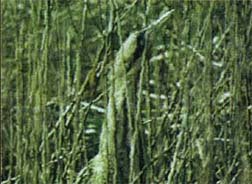 Many birds also have clever disguises and their colouring often matches their surroundings. One of these is the bittern, which makes its nest in marshland among reeds and rushes. The bittern's feathers have a striped pattern that matches the reeds very well. If the mother bittern is disturbed when she is sitting on her eggs, she points her beak straight into the air and sways her body, so that she blends in with the reeds blowing in the wind! Who designed the bittern with its striped pattern? And who told her how to make herself 'disappear' in the reeds when danger is near? This could hardly have happened by gradual evolution over thousands of years. The bittern's perfect camouflage must have been designed by God, the Creator.

Tom and Jenny were staying with their cousins in a high-rise apartment in a big town. On Sunday they went to Sunday school at a little chapel.

'A boy called Reuben knew everything!', said Tom as they walked back to the apartment.

Reuben, who was from a gipsy family, caught up with them, and they asked if he would like to go for a walk with them while they were waiting for Sunday lunch to cook.

Reuben was delighted. They went along an old canal running parallel to the busy, roaring motorway.

'There's a bird hovering over the motorway', observed Tom. 'A kestrel!'

'Yes', replied Reuben, 'they nest on the cooling towers of the electricity generator over there.'

'With all that traffic and noise!' said Jenny.

'They hunt voles and mice along the roadside', said Reuben. He lifted up an old bit of corrugated sheeting, and there sat a little furry vole. 'They often hide under there', he explained, carefully replacing it.

'Are there any fish in the canal?' asked Tom. 'It's very dirty.'

'Some roach, and further down pike, but I wish they'd clean it. Look—there are some tadpoles in the side ditch.'

'Do you know anything about wild herbs?' asked Jenny.

'We eat nettle tips as greens in the spring, and this garlic mustard makes a nice salad. Have a bit.'

Jenny tried some young leaves. 'Oh, it's lovely! There's some in our hedge at home. It says in the Bible that God gave us green plants for food.'

Across the canal, the factories ended. There was a Hawthorn hedge in bud, with trees beyond. 'That's an old people's home', said Reuben. 'Do you hear that drumming?'

The pretty white flowers of blackthorn covered a dark bush. 'They say cold winds last as long as blackthorn flowers are out. Country people call it "blackthorn winter",' said Reuben. 'There's a thrush's nest in there.'

'Here are some celandine flowers, and red and white deadnettles', called Jenny.

'Come along the canal here', said Reuben, pointing to a mass of delicate mauve flowers. 'Cuckoo-flowers.'

'We call them milk-maids', said Jenny. 'And Shakespeare called them "ladies' smock",' added Reuben, 'That's why we need Latin names — it's Cardemine pra-tense.'

Tom stared at Reuben in amazement, wondering how this poor-looking boy in scruffy clothes could be so clever.

'That surprised you', said a voice behind them. Uncle Jo had caught up with them to say lunch was ready, and to ask them to invite Reuben.

Tom gasped, 'I can't believe we can find all this right here in town. We thought there was no wildlife here, but now we know better. Thanks, Reuben, but how on Earth do you know so much?'

Reuben looked shy, but Uncle Jo answered, 'Reuben loves the Lord, so he loves all the animals and plants God has made. Most children along here would only see the cars, and would walk on the wild flowers.

'I know you and your cousins love Jesus too. He sends His Holy Spirit, not only to teach us about salvation, but to open our eyes to the wonderful things He created—tiny flowers, great trees, bird-song and little animals. So we all praise Him together' (see Psalm 148:7-12).

(Tom and Jenny will be back next issue)

The Australian brush turkey is an unusual bird. Unlike most birds, which build a nest and then sit on their eggs to keep them warm until they hatch, the brush turkey builds an incubator!

When the time comes to lay its eggs, it gathers leaves and twigs into a large pile, rather like the compost heap made by gardeners. Then it lays as many as 35 eggs and buries them in this pile. As the leaves and twigs decay, the pile becomes warm, and the eggs are incubated.

To prevent the eggs becoming too hot or cold, the male brush turkey pushes its head into the pile to test the temperature. If it is too hot, it will move some of the material to let air in, but if it is too cold, it will add more material to the pile. 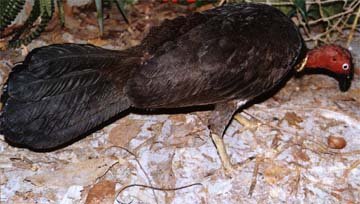 When the chicks hatch, they wriggle their way up through the pile until they reach the open air. Then, unlike most young birds, they look after themselves and have nothing to do with their parents. Most other birds are either born naked, or have a coat of soft down, but brush turkey chicks are born with feathers, and can fly almost immediately.

How did the brush turkey learn to build its clever incubator? How does it know it needs to keep the eggs at a certain temperature? And how do the chicks know they have to wriggle their way up through the pile of leaves and twigs when they hatch?

The brush turkey's eggs had to be kept at the correct temperature right from the time these birds first appeared on Earth, or there would be no brush turkeys alive today. We believe that God designed and created the brush turkey, with its amazing and unusual way of life.

When you have done something well, maybe made a sculpture, or painted a picture, you feel pleased with it. The Bible tells us that in the beginning God was pleased with His creation (Genesis 1:31).

God must have enjoyed creating all the wonderful things in His world; those insects with their clever camouflage, and all the beautiful flowers. But the part of creation God was most pleased with was people! God created human beings in His image (Genesis 1:27). Unlike other living things, human beings can know and love their Creator.

Sadly, Adam and Eve, the first people on Earth, disobeyed God, and their sin cut them off from Him. All God's creation was spoilt, and all people are now affected with the sin disease. This makes God very sad, but He has not given up on us; His Son, the Lord Jesus Christ, came to Earth to bring us back to God. He died for the wrong things we have done, and then rose from the dead.