Have you ever played hide-and-seek at night? It takes the game to a whole new level because it’s hard to see things in the dark—even a person standing right in front of you! But imagine if each hiding person held up a glow stick; it would be much easier to find your friends once they had a glowing light.

God designed some amazing glow-in-the-dark creatures that make their own light through a chemical process called bioluminescence (bi-o-lu-mi-NES-cents). Let’s play a game of hide-and-seek to discover a rainbow of shining colors from creatures around the world. 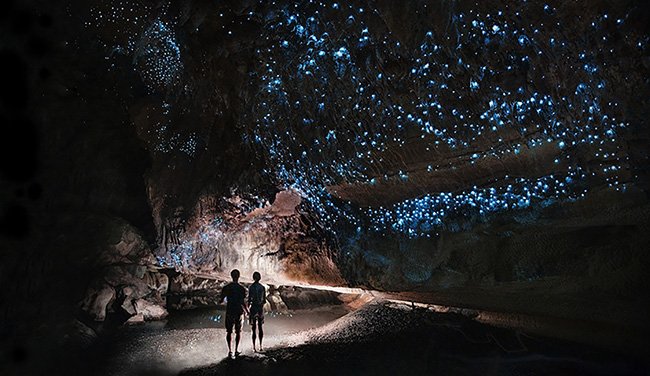 The word bioluminescence means “living light.” It is a combination of the Greek word bios, which means “life,” and the Latin word lumen, meaning “light.” 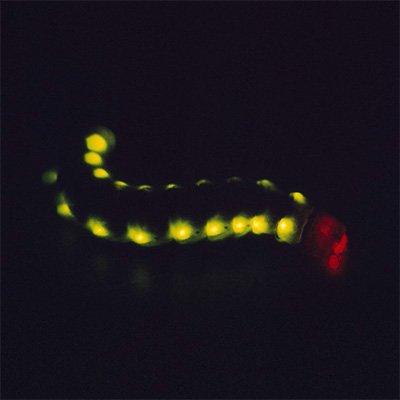 Millipedes spend their days burrowed in dark, damp places. Scientists have discovered more than 12,000 species of these amazing “thousand leggers,” but only about a dozen species glow. Some rare species are both bioluminescent and biofluorescent. Even though most bioluminescent millipedes are blind, God gave them the instinct to know when it’s nighttime. That’s when they come out of hiding all aglow to look for food. Their brightness may warn predators that they are poisonous.

Millipede at night (left) and during the day (right).

Bioluminescence happens when chemicals react inside a creature’s body to create light. That’s different from biofluorescence (bi-o-flo-REH-sents), which happens when an organism absorbs light and gives off that light as another color. You need a special light to see biofluorescence. (For example, when divers shine a blue light on the hawksbill sea turtle, the shell gives off yellow-green, red, and orange light, even though the shell normally looks dark green.)

The firefly squid is covered in tiny organs called photophores (foh-toh-fors) that give off deep blue light. These lights can flash all at once or in different patterns, similar to fireflies. Scientists believe the squid uses these lights to communicate with other squid and to attract prey. Firefly squid are the only squid that can see in color, maybe so they can see the colors glowing from other members of their species. 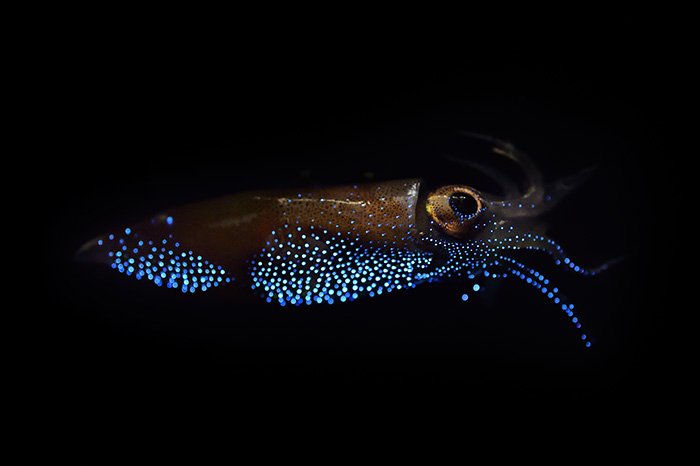 The firefly squid glows in the waters of Toyama Bay, Japan

The oceans are filled with tiny algae that light up. The single-celled organisms are called dinoflagellates (di-no-fla-gel-lates), and they live near the surface of the water. When they are disturbed by movement, such as by a fish looking for a meal, they blink on their lights. The light scares the fish away or attracts larger predators that eat whatever is bothering the algae. When enough of the small creatures are bothered at the same time, such as when a boat churns the water, their color lights the water with a vivid blue glow. 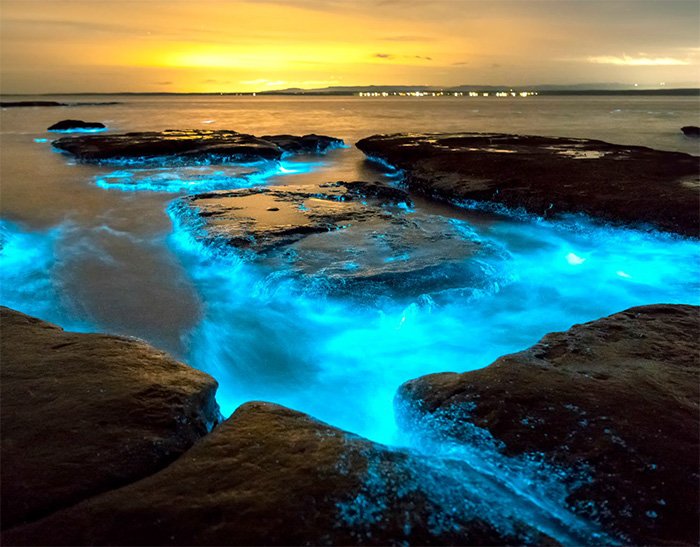 Jervis Bay, Australia, is famous for its “sea sparkles,” or bioluminescent algae. 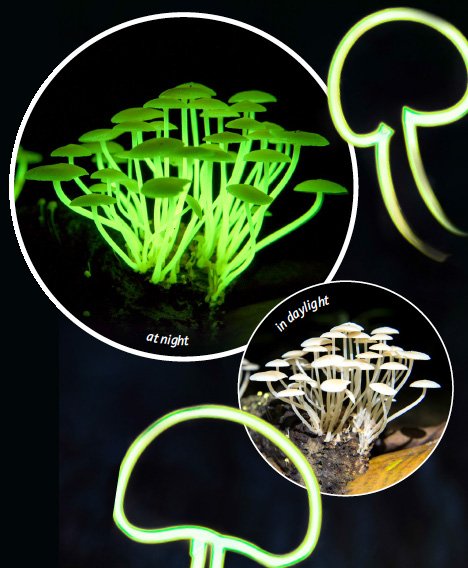 Have you ever walked into the woods and spotted a mysterious green glow in the trees? If so, you may have seen something called foxfire, the name for the glow of mushrooms on rotting wood. Bioluminescent mushrooms glow green all the time, but it’s easiest to see their light at night. These ghost mushrooms can be found glowing in Australia. 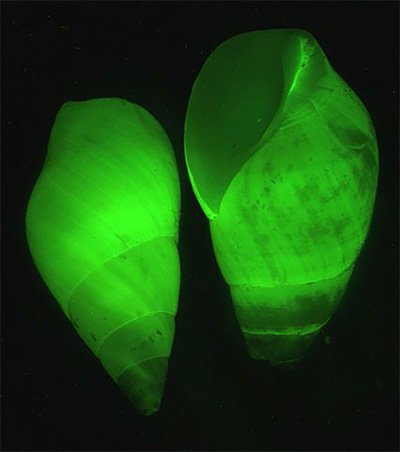 The yellow-coated clusterwink snail lives in New Zealand and Australia. When something bothers this snail, it lets out flashes of bluish-green light. The glow spreads across its whole shell, making the snail look larger to a predator. At low tide, many of the snails cluster and glow together on rocks—which is why they are called clusterwinks. 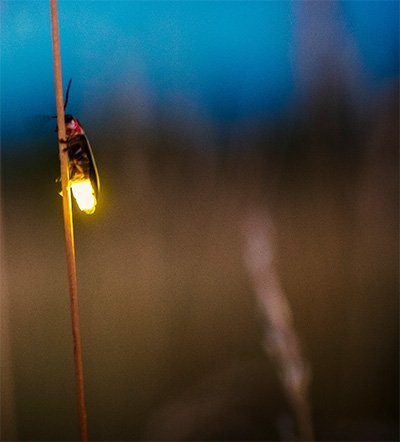 Fireflies have a confusing name because they are not flies. The term firefly is actually given to any of the 2,000 types of glowing beetles that make their own bioluminescent light. In some firefly species, the larvae and eggs also glow. Because fireflies love warm, wet places, they usually can be found lighting up near ponds, rivers, marshes, and other water sources.

When they eat too many fireflies, some frogs start to glow!

Did you know that our lives can be filled with living light? We’re not bioluminescent like the creatures mentioned here, but in the Bible, Jesus tells us that when we believe in him and have the Holy Spirit leading us, our love and our actions shine. This doesn’t mean that we actually start to glow, but the way we live stands out to others like a flashlight in a dark place.

In John 8:12, Jesus tells us that when we love and follow him, we will no longer walk in the darkness of sin but will be filled with his light of life.

In Matthew 5:14–16, Jesus tells us that people who believe in him are a light in this world and that our good works should shine like a city on a hill. And in Ephesians 5:8, followers of Jesus are called children of light. 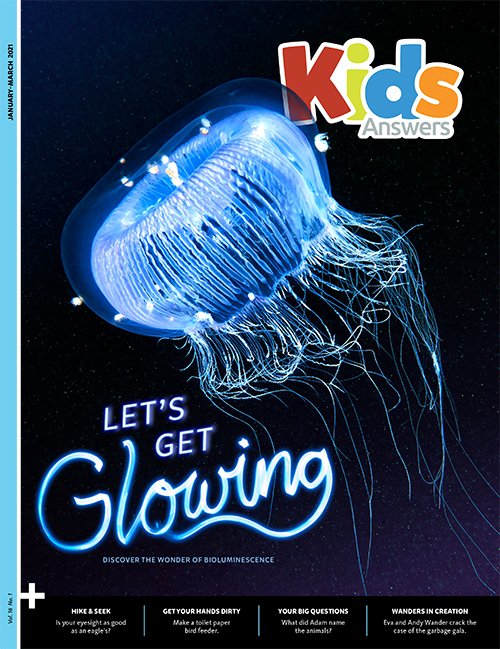 Discover the Wonder of Bioluminescence