Patterns and colors can confuse other animals.

Patterns and colors can also confuse other animals. Some animals use their disguises to fool predators, and some use them to trick their victims.

Female cuckoos don’t make their own nests to lay eggs in. Instead, they swoop in and use another bird’s nest. The bars on their bellies give them the look of a hungry sparrowhawk, and this disguise scares away a mother bird long enough to lay an egg.

Although it’s not poisonous, the milk snake’s bright bands look very similar to the deadly coral snake. If you’re ever in doubt, remember this rhyme: “Red on yellow, kill a fellow; red on black, friend of Jack.”

White and black stripes make the zebra easy to spot almost anywhere—especially for hungry lions. So why does it have them? Scientists think these stripes make it tough for predators to target zebras that move in a herd. This dizzying effect is called motion dazzle. 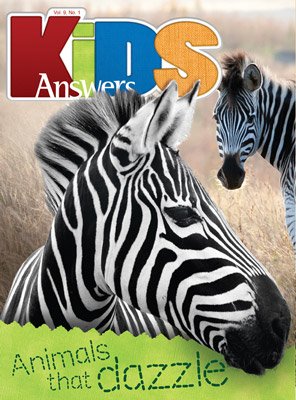 This issue of Kids Answers features animals that dazzle! Learn how animals were created to show God’s wisdom.