Poison dart frogs are hard to miss in the tropical forests where they live. 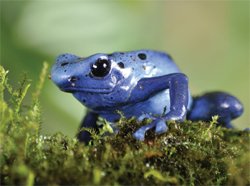 Poison dart frogs are hard to miss in the tropical forests where they live. Their skin seems to glow with swirls, spots, and stripes of various colors.

They’re beautiful, but their beauty is a warning.

That’s because these small frogs, which range in size from around a half inch (1 cm) to two inches (5 cm), pack a powerful wallop. Poisonous chemicals in their skin discourage other animals from eating them. Some people who live in the tropical forests have even used this poison to make weapons. 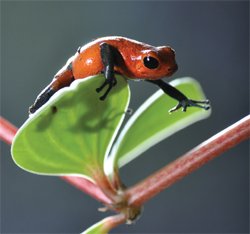 In the forests of Colombia, South America, some native people use poison dart frogs to make deadly blowgun darts. The darts are rubbed directly on the backs of the deadliest frogs, or the frogs are heated over a fire first. The heat releases the poison, which sticks to the dart for a year or more. That gives the natives a great weapon for hunting birds, monkeys, and larger animals. 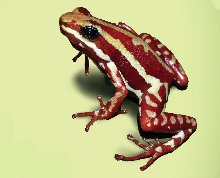 Would you believe that poisons could actually be used to help us? That’s true with the phantasmal (fan-TAZ-mull) poison frog. It has one of the strongest poisons of any frog, but scientists are looking for a way to convert this poison into a strong painkiller.

Despite their name, most poison dart frogs can’t hurt humans. While they might make you sick or burn your skin, their poison mainly keeps them safe from other animals. But there’s one that you’ll definitely want to keep away from: the golden dart frog. The poison from only one of these little critters could kill 10,000 mice, 10 full-grown men, or two large elephants. 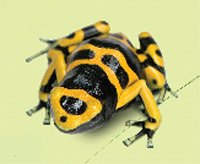 Did you know that poison dart frogs are harmless when raised in captivity? Scientists think that their normal diet of ants, centipedes, beetles, and mites is what makes them so dangerous. The frogs borrow chemicals from these creepy crawlies and don’t produce the poison on their own.

You might find poison dart frogs at your local pet store. Without their normal forest food, they won’t be dangerous and can live for several years. (Don’t get one from the wild. The poison can take a while to disappear.) As with any pet, make sure you handle the frog carefully and wash your hands after touching it.

Next Article Did God Make Poison? 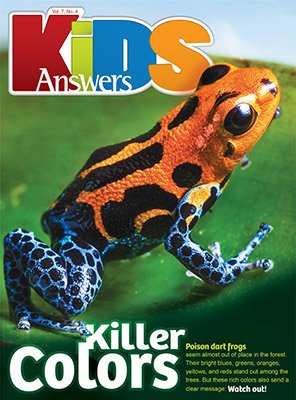