Lesson 19: What Is Compromise?

by Stacia McKeever and Dan Lietha on April 4, 2016 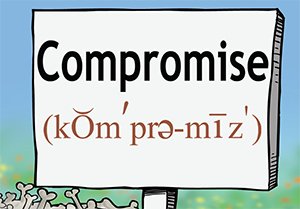 “And do not be conformed to this world, but be transformed by the renewing of your mind, that you may prove what is that good and acceptable and perfect will of God” (Romans 12:2).

A compromise is a “settlement of differences in which each side gives something up.” Some times compromise is necessary and good, but not when it involves giving up truth.

Those who compromise by believing that the earth is many millions of years old, and claim that this fits what the Bible teaches, fall into three main groups.

Progressive Creation: This is the idea that God created various creatures to replace other creatures that died out over millions of years.

Theistic Evolution: This is the idea that God used the process of evolution over millions of years (involving struggle and death) to bring about what we see today.

A compromise between a belief in “billions of years” of history and an acceptance of the biblical account of history destroys the authority and message of the Bible. All these ideas put death and bloodshed before sin. These compromising views aren’t necessary and, in fact, are harmful to the teachings of God’s Word. Instead of compromising, we need to accept what God has plainly revealed to us through His Word—the world is about 6,000 years—not billions of years—old. And true science supports this conclusion!

Do You Know When Compromise Began?

Today, many people choose to reject the Word of God in favor of their own opinions. This isn’t an original idea, however. Our first parents, Adam and Eve, were the very first compromisers. They chose to believe the words of someone other than God. When Adam ate from the Tree of Knowledge of Good and Evil, he deliberately chose to disobey God’s word to him. In that case, his compromise resulted in death—for us all (Romans 5:12).

When we’re tempted to doubt the plain teaching of Scripture because of someone else’s opinion, keep in mind that God’s Word is perfect (Psalm 119:140). He expects us to follow His commands (2 Timothy 3:16–17) and trust what He says—without compromise (Psalm 119:128).