God sent an angel to prepare the parents of John, who would be the prophesied messenger to come before Jesus. God told Joseph to take Mary as his wife because her baby was from the Holy Spirit and he would be the Savior. Then God arranged for Joseph and Mary to travel to Bethlehem. It was there, in the city of David, that Jesus was born.

This devotional series from Answers Bible Curriculum is a great classroom activity. If you are not in a class, find a few friends or family members to read through the lessons and play the Christmas Chaos game with you.

And the angel said to them, “Fear not, for behold, I bring you good news of great joy that will be for all the people. For unto you is born this day in the city of David a Savior, who is Christ the Lord.” Luke 2:10–11

In the first lesson, we learned that God promised to send a Savior in Genesis. The Savior would be a descendant of Abraham and King David. Over hundreds of years, God told many prophets different things to write, which gave people hope about the coming Savior.

Then the day finally came when the angel Gabriel delivered the message to Mary that she would have a baby by the power of the Holy Spirit. The prophet Isaiah wrote that a virgin would be with child and he would be called Immanuel, which means “God with us.” Mary’s baby would be the Son of God, the long-awaited Savior!

In the second lesson, we saw how God made preparations for the birth of Jesus. The prophet Malachi prophesied that a messenger would come before the Savior to prepare the way. God chose the priest Zechariah and his wife, Elizabeth, to be the parents of the messenger.

When John grew up, he became a prophet just like the angel said he would. He told people to repent of their sins and to be ready for the Savior who would come to save them.

Then God had to prepare Joseph so he knew that Mary’s baby was the Son of God. Joseph obeyed the angel’s instructions and took Mary as his wife. But they were living in Nazareth, a town in Galilee.

God caused the Roman ruler, Caesar Augustus, to call for all the people to be registered in their family's hometown. So Joseph and Mary traveled about 70 miles south to Bethlehem, and Jesus was born while they were there.

Today, we’ll talk about some people who wanted to see Jesus and the joy they felt when they saw the Savior. We’ll see that they all had to leave where they were and go find him.

Looking for candy canes might not be too important, but it is fun. Most of us don’t mind searching for something that’s fun or very important to us. Let’s learn about the first people who believed it was important to search for the Savior the night he was born.

Read Luke 2:8–16. In our earlier lessons, we saw how God sent an angel to Zechariah, to Mary, and to Joseph. God send an angel to the shepherds in these verses.

What was the good news of great joy? The angels told the shepherds that the Savior, Christ the Lord, was born. The shepherds knew what city they should search in, but how would they know which baby it was? The angel gave the shepherds a sign. They would find a baby wrapped in swaddling cloths and lying in a manger.

Before the shepherds left the field to look for this special baby, something big and amazing happened. Let’s read about that in the next verses, Luke 2:13–16.

A huge crowd of angels appeared and praised God. That would have been amazing! The shepherds left the fields in a hurry and went into Bethlehem. They found Mary and Joseph, and the baby lying in a manger just as the angel said.

In the second lesson, what did we learn about where Jesus was born? The word inn in Luke 2:7 is actually a guest room. The upstairs guest room in the home where Joseph and Mary were staying was full, so they stayed downstairs in the home. People used to bring their animals inside their houses at night and keep them on the lower level, so there would have been a manger (feeding trough) there. 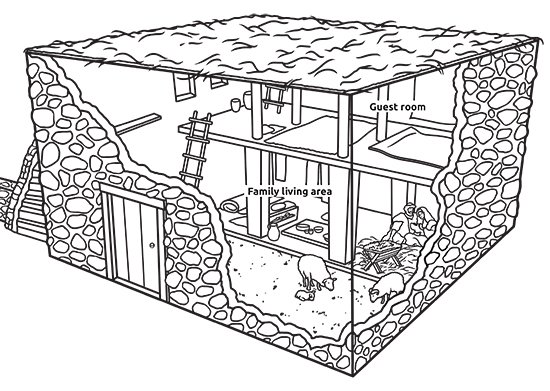 After visiting baby Jesus, the shepherds told others what they had seen and heard! They described how the angels appeared and gave them a message about the child and where they found him in Bethlehem. They spread the word and their joy at meeting the Savior.

Like most Israelites who knew about the prophecies of the Savior from the Old Testament, the shepherds had been waiting for Jesus, and they were excited to see him.

But there was another man who was waiting, too. His name was Simeon, and he lived in Jerusalem. Simeon had been told by the Holy Spirit that he would not die until he had seen the Savior. He didn’t have to search too far to find Jesus. You see, all Jewish parents were supposed to bring their firstborn sons to the temple in Jerusalem to offer a sacrifice. So Mary and Joseph traveled the fairly short distance from Bethlehem to Jerusalem with baby Jesus.

When they got to the temple, the Holy Spirit guided Simeon to Mary and Joseph. He picked up Jesus in his arms and thanked God.

The Holy Spirit guided Simeon to say that Jesus would bring salvation to all people—Israelites and Gentiles. That's very good news! Mary and Joseph listened and wondered about what Simeon said. Later they returned to Bethlehem and lived there with their new baby.

So far we’ve seen how Jesus’ birth brought joy to the shepherds, who went right away to find the baby in Bethlehem, and an old man in the temple, who was led by the Holy Spirit straight to Jesus.

But there were people from outside Israel who also learned about Jesus’ birth. God got their attention by placing a special star in the sky!

These wise men were important men who lived in the east, far away from Israel. They studied the stars and may have even read some of the Old Testament Scriptures from Israelites who had lived in their country long ago. These wise men had seen a star and realized that it was a special sign of the birth of a king.

They traveled many miles to the city of Jerusalem. The king there was an evil man named Herod. When he heard that there were visitors asking about a new king, Herod became jealous and worried that he might lose his power.

Herod called the wise men to him. Read Matthew 2:8 to find out what he said to them.

The wise men left for Bethlehem to continue their search for Jesus. Read Matthew 2:9–12.

This visit of the wise men was not the same night the shepherds came. It would have been many months after Jesus' birth. Remember that these men were Gentiles, not Israelites. But the gifts they brought to Jesus were worthy of a king, and they even worshipped him.

How many wise men were there? Actually, the Bible doesn’t say how many wise men came to see Jesus. We often hear that there were three, probably because three gifts are listed. But most likely there was a large group of wise men and their servants who traveled together to Bethlehem.

What about King Herod? Did the wise men go back and tell him where they found Jesus? No. They were warned by God in a dream not to return to Herod. 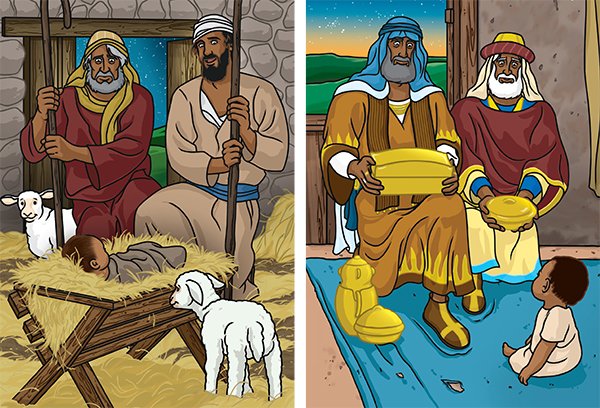 Do you see how God arranged for so many different people to find Jesus? The angels announced the message to humble shepherds out in the fields. They raced to Bethlehem to search for Jesus the night he was born. Then God guided Simeon right to Jesus when Mary and Joseph came to the temple in Jerusalem. God placed a special star in the sky so that wise men would see it. They traveled from another country to seek Jesus so they could worship him and give him gifts fit for a king.

Jews and Gentiles, rich and poor, came to Jesus. His arrival brought hope and joy not only to the shepherds and wise men but also to us today! Because of Jesus, we can have the hope of salvation and the joy of knowing him as our Savior and King.

We saw how God allowed some people to seek out Jesus just after he was born. They were joyful when they found him because they believed he was the Savior who came to save us from our sins.

God arranged for Jesus to be born in a humble home where the shepherds could come to see him. Then the shepherds spread the word to people in Bethlehem about Jesus and what the angels said. They were excited and joyful about the announcement that the Savior had come!

Another man waiting for the Savior was Simeon. The Holy Spirit led Simeon into the temple when Mary, Joseph, and Jesus were there so Simeon could meet Jesus. Simeon held the baby Jesus and praised God with joy for sending a Savior to all people.

Then God placed a star in the sky for the wise men to follow. They came to Jerusalem looking for the new king. After they spoke to King Herod, the wise men saw the star again. They joyfully followed it straight to the house in Bethlehem where Jesus was and gave him gifts and worshipped him as Savior and King.

God’s Word in the Real World

So we’ve seen how many people felt joy at the first Christmas. But what is joy? Isn’t it the same as happiness? Let’s think about that.

We often get joy and happiness confused. Think of it this way: happiness is a feeling that comes and goes; joy comes from God and stays with you whether you feel happy or not.

God promises true joy to anyone who turns away from sin and trusts in Jesus to save them from the punishment of sin. Once we are saved, we have the joy of knowing our sins are forgiven and we are part of God’s family. We don’t have to fear death because we know we’ll go to be with Jesus in heaven when we die. And even when times get tough, we can have joy deep down inside because we know God is with us and we belong to him.

This Christmas the greatest gift you can receive will not be under the Christmas tree or in your stocking; it is the gift God sent of his Son, Jesus. He is the only one that brings true joy.

For a fun review of this lesson, play The Joy of Christmas—Christmas Chaos Review Game. 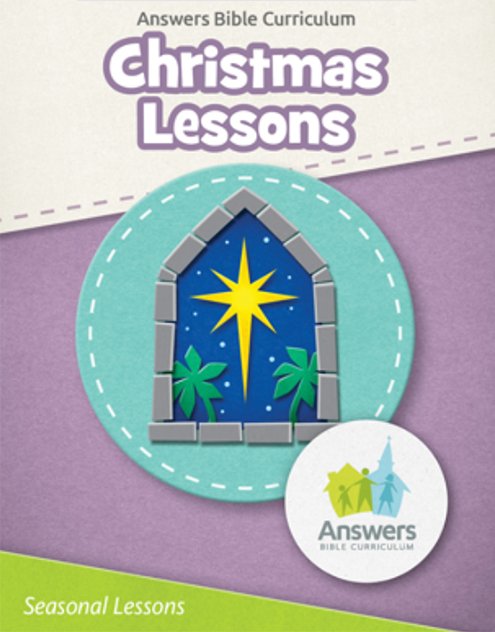 This Christmas season, learn how God promised to send a Savior, how God prepared for Jesus’ birth, and how Jesus’ coming brings joy.