You Don’t Spank a Cat

“What was that?” asked Jessie’s mom.

Jessie ran into the kitchen to see what was making all the noise. Oh no! Freckles was up on the counter—and he was eating the banana bread!

Freckles stopped and stared at Jessie. He took one more bite, licked his lips, and then calmly jumped down off the counter and walked away.

Mom looked at the loaf of banana bread she had just baked. “Now just look at this mess. What a waste! I hope it doesn’t make him sick,” she said as she threw the half-eaten loaf into the garbage.

“Freckles was a bad kitty! What should we do?” Jessie asked.

“I think Freckles needs some discipline to keep him from getting on the counter anymore.”

“No,” Mom chuckled. “I don’t think spanking him will help. But I have read that cats don’t like to get water sprayed in their face.”

Mom went into the laundry room. When she came back, she had a plastic bottle in her hand. She filled it with water and screwed on the top. “Here, try using this.” She handed the spray bottle to Jessie. “Whenever Freckles jumps on the counter, spray his face with this water until he gets down.”

Jessie and her mom went back into the living room to finish reading their story. After a while, Jessie heard another clunking noise in the kitchen. She raced into the kitchen and grabbed the bottle. Sploosh, sploosh! Jessie sprayed two direct shots in Freckles’ face. Freckles jumped back down to the floor and shook his head. He looked up at Jessie with surprise then sat down and wiped his face with his paw.

“Hooray, it worked! Now stay down from there, silly cat,” she said.

Freckles got up and wandered off to find a good napping spot in the sunshine.

There was a knock at the back door. Jessie’s mom answered it. “Hi Justin, how are you?” she asked.

“Oh, I’m okay. I still have a stomachache, though,” Justin replied.

“A stomachache. Are you sick?” asked Jessie.

“No, not really. I just ate too many cookies yesterday,” explained Justin.

“That’s right. Your mom said she was baking a bunch of cookies for the church bake sale,” said Jessie’s mom.

“Yep,” said Justin. “But I got in trouble ‘cause I ate some of them when I wasn’t s’posed to.”

Justin explained what had happened yesterday when he should have asked his mom if it was okay to eat cookies. But he chose to just go ahead and eat them instead—and he ate way too many!

“Wow! Was your mom mad? Did you get spanked?” Jessie asked.

“My mom was really mad. But I didn’t get spanked. I had to do chores for her because she had to make another batch of cookies really fast. So I had to dust and sweep the floors.”

“What do you mean, Auntie Bev?” asked Justin.

“I mean that’s a good way to discipline somebody,” Jessie’s mom explained.

“I thought disci-dips-dis-i-pline was just spanking when we do something wrong,” said Justin.

“No, not always. Discipline is like training or teaching someone to do the right thing. God disciplines us. He punishes us when we do things that are wrong to teach us to make right choices so we don’t keep on sinning.”

“I don’t get it,” said Jessie. “I thought Jesus forgave our sins already so we don’t have to be punished.”

“That’s true, Jessie,” Mom replied. “When we put our trust in Jesus, He forgives us. But we still sin. And God teaches us not to sin by disciplining us.”

“I’m disciplining Freckles. He got on the kitchen counter and ate our banana bread. Mom had to throw it away, and now he might get sick.”

“So, you spanked Freckles?” asked Justin.

“No, silly. That’s what I asked, too. But you don’t spank a cat,” Jessie laughed.

“Then what do you do?” asked Justin.

Suddenly there was a clunking noise from the counter behind them. Jessie said, “I’ll show you!” as she grabbed the spray bottle again.

Justin watched as Jessie sprayed water into Freckles’ furry face. The cat sputtered and jumped quickly off the counter. He gave Jessie a look as if to say, “That wasn’t very nice,” and wiped the water off his face with a paw. 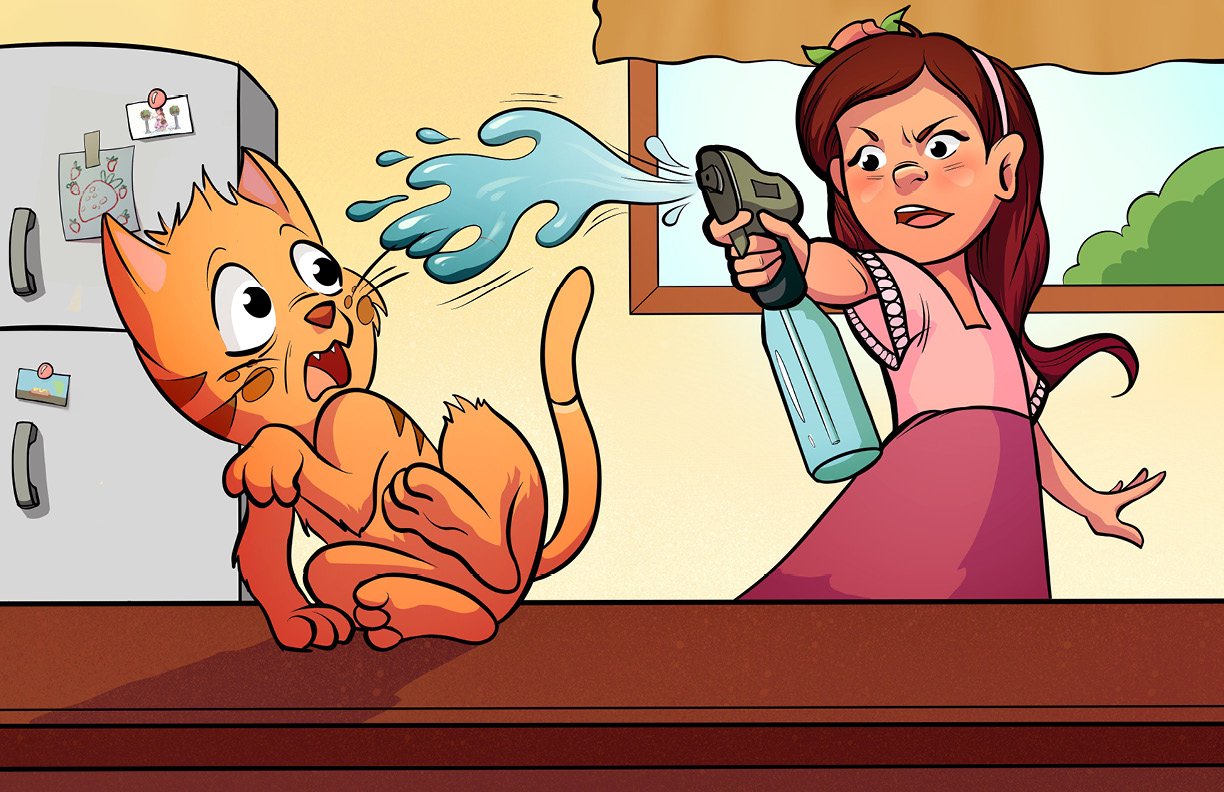 “See, I’m teaching him,” Jessie said. “If I spray him whenever he jumps on the counter, then he won’t want to get up there anymore.”

“I get it,” said Justin. “We have to be punished when we do the wrong things so we won’t want to do them anymore.

“That’s right,” Jessie’s mom agreed. “When we’re punished for something, it should remind us not to do that same thing ever again. That’s all part of discipline.”

“So I had to do extra chores so I would remember not to eat cookies without asking first.”

“Mm hmm. You’ll remember what happened and make sure to ask next time, right?”

Clunk, clunk. “Now if I can just get Freckles to remember, too!” said Jessie as she sprayed water at Freckles—AGAIN. 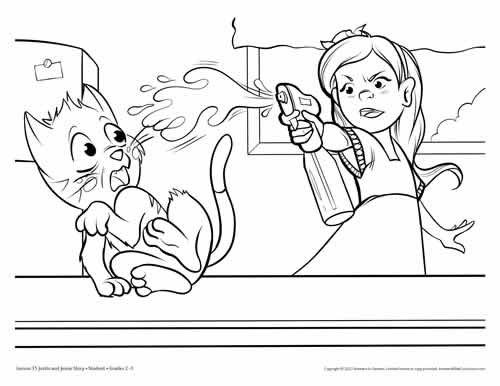