“And now for the awards,” announced Coach Martin.

Justin felt anxious. Would he get an award tonight? He perched nervously on the edge of his seat as his soccer coach called his teammates, Jeremy and then Udo, to come up and get trophies. Then Justin heard his name and went up to receive his certificate. Justin sighed as he took it and thanked Coach Martin.

“That’s a nice certificate,” Mom said later in the car. “We can buy a frame for it and put it up on your wall.”

“Yeah, I guess so,” said Justin. “But I was hoping for a shiny gold trophy.”

“Maybe you’ll get one next year,” Dad encouraged.

Justin awoke the next morning feeling grumpy. He shuffled down the stairs to the kitchen for breakfast.

“Jessie came by,” said Mom. “She said she needs you to help her draw a picture.”

“Huh? Why would she need me?” Justin said.

“I’m not sure I’m good at anything,” Justin said gloomily.

Justin finished his breakfast and went to Jessie’s house. Jessie opened the door. She was excited about something.

“Justin! Are you ready? I have a piece of paper and some crayons. But I have to find Freckles,” said Jessie. Then she darted into the living room.

“Huh? What’s going on, Jessie?” Justin asked as he followed her.

“The contest,” Jessie said. She stopped running around the room and stared at Justin. “You know, the drawing contest at the library. They want kids to draw pictures of a pet. You can draw Freckles. I’m sure you’ll win a prize, too, ‘cause you draw great!”

“What do you mean? I like your pictures. Pleeaase, just do it, okay? We can share the prize, since it’s my cat.” Jessie pulled on Justin’s arm. “Come on! Today’s the last day to turn in our drawing.”

Justin and Jessie went in search of Freckles, her cat.

“Ah ha! Found you,” said Jessie when she spotted him by his food dish.

Freckles let Jessie carry him to the living room where she sat down in the rocking chair. Freckles moved down to Jessie’s lap, turned around twice, sat, then licked his paw and finally curled up and closed his eyes.

Justin drew as fast as he could. He used an orange crayon for the fur and added some brown stripes. After a while, Freckles got up, stretched, and jumped down.

Jessie ran to see Justin’s drawing. “That’s super, Justin! I wish I could draw as good as you. Let’s go tell my mom so we can take it to the library.”

It didn’t take long to get to the library. Justin and Jessie rushed in and handed the drawing to the librarian.

“Well, you’re just in time,” she said. “Since you two worked as a team, why don’t you put both of your names on the drawing? If you’d like to wait, we’ll announce the winners in about 15 minutes.”

The kids wandered around the library while they waited. They were studying the pictures in a new dinosaur book when they heard the librarian’s voice, “Gather around to hear the winners of this year’s drawing contest.”

A little while later, Justin came tearing in through his back door. “Mom, Mom! Guess what? We won, we won!”

“What?” Justin’s mom came around the corner. “What did you win?”

“We won the drawing contest at the library!” he shouted as he jumped up and down excitedly. Jessie and her mom stood there beside him smiling.

Justin showed the drawing of Freckles to his mom and explained how the librarian announced him and Jessie as the winners for their age group. Justin got a new drawing book and a pack of colored pencils, and Jessie and Justin both got gift cards to get a free ice cream sundae. But best of all was the shiny gold trophy, which Justin proudly held up high.

“Wow! Congratulations, Justin. How wonderful!” His mom examined the trophy then gave him a hug.

That night at dinner, Justin told his dad all about the drawing contest.

“Well, I’m proud of you, Justin,” he said. “It looks like God has given you a talent for drawing. You should thank him for that.”

“But how come God didn’t help me get a trophy for soccer last night?”

“Well, God gives all of us different abilities. Some things are really easy, like drawing is for you, and some things we need to really work hard to do,” Dad explained.

“But no matter what abilities He gives us, God always wants us to do our very best at it and give him the glory,” Mom added.

“You mean I should be thankful for everything I can do?” Justin asked.

“That’s right. We can’t do anything without God, and we should always remember that,” said Dad.

Justin thought for a minute. “So, I guess I should thank him for my trophy, too, ‘cause I couldn’t draw if God didn’t help me, right?”

“Right!” said Dad as he pushed his chair back from the table. “And you can thank him for the free ice cream sundaes we’re going to go eat!” 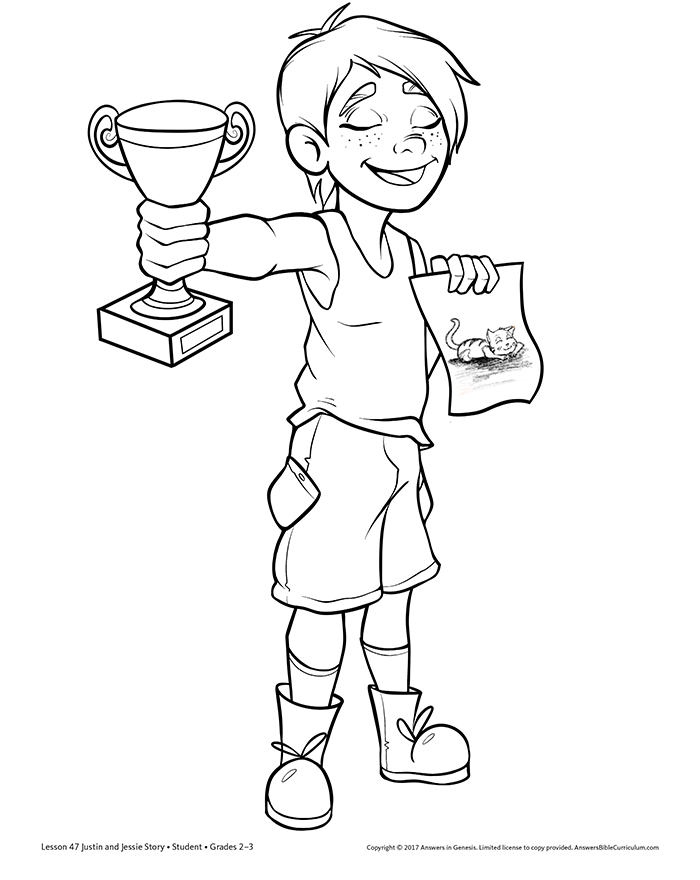 Previous Article What a Day! Next Article Surprise Attack