Jessie woke up feeling super tired. Her head hurt, and her nose was stuffy. She turned over and tried to go back to sleep, but the sun was shining on her face.

With a groan, Jessie got out of bed and slowly plodded down the stairs to the kitchen. Her mom set a bowl and spoon on the table in Jessie’s place. “Good morning, Sweetheart.”

Jessie opened her mouth to say good morning, but instead she sneezed. Ah-choo!

“Oh, dear. You sound like your dad. He has a cold, too,” said Jessie’s mom. She poured cereal into Jessie’s bowl. Then she felt Jessie’s forehead to see if it felt hot. “You don’t feel like you have a fever. That’s good,” she said as she added milk and strawberries to the cereal. “Maybe this will help you feel better.” Strawberries were Jessie’s favorite!

Jessie reached for her spoon and bonked her elbow on the edge of the table. “Ow!” As she clutched at her injured funny bone, her other elbow hit her cereal bowl and flipped it over.

“Ahh!” Jessie yelled. Her mom turned just in time to see the lake of milk, cereal, and strawberries flow across the table and into Jessie’s lap. Mom grabbed paper towels and rushed to help, but she was too late—Jessie was already covered with milk.

“I can tell,” said Jessie as she tried to snatch a strawberry that was about to roll off her lap, “that this is going to be a bad day.”

Later that evening, Jessie sat beside her dad on the couch. They each had a fluffy blanket over them and a box of tissues for their red, runny noses. They sipped on big bowls of chicken noodle soup, which neither of them could taste since their noses were so stuffy.

“How was your day, Sweetie?” Jessie’s dad asked her.

“Terrible,” Jessie replied. “I woke up with a cold, then had my cereal, milk, and strawberries spill all over my favorite pajamas at breakfast.”

“It was quite a mess,” Mom chuckled.

“You know what happened to me?” asked Dad. “I accidently walked right through a muddy puddle and had squishy socks all day.”

“Then I was late to a meeting,” Jessie’s dad went on. “When I walked in, my wet shoes squeaked and everybody turned to look at me!”

Jessie slurped her soup. “That’s embarrassing!” she said. “But my day got worse. After the cereal spill, I tried to watch my favorite TV show, but it was cancelled!”

Dad nodded sympathetically. “My day got worse, too. The fire alarm went off in my office building, but there wasn’t a fire. Everybody had to tromp outside and stand in the rain until they said it was okay to come back in. And I didn’t have my coat or an umbrella.”

“I’m sure that didn’t help your cold,” Mom noted.

“That’s not all,” Dad continued. “I went to the cafeteria to eat lunch, and they didn’t have anything I liked, just broccoli casserole and green pea soup.”

Jessie laughed at the goofy face her dad made.

“That’s not as bad as what happened to my lunch,” Jessie declared. “Mom made me a peanut butter sandwich and told me it was on the kitchen counter. But when I got there, it was on the floor. Freckles ate half of it already!”

“Oh, you poor, poor people,” Mom said with a wink. “Just listen to you two. You sound so sad and gloomy. What a terrible day you’ve had!”

“Well,” said Dad, “when you’re hoping for a cheeseburger and french fries, and they give you green pea soup, that’s pretty bad, don’t you think?”

“Oh, absolutely, Dear,” Mom smiled. “But I’ve been listening to the two of you complain about your day long enough. I think it’s time to think about someone else who had it even worse than any of us.”

“Remember Joseph in the Bible? He was Jacob’s favorite son,” explained Mom. “His father gave him a special coat with all kinds of colors.”

“Well, that’s the good part. But his brothers got so jealous they tore off his coat, threw him in a pit, and sold him as a slave!”

“He had a really rough day,” Mom said.

“Things got even worse when Joseph was taken to Egypt and worked as a slave. His master’s wife told lies about him, and he was thrown into prison!” Dad added.

“That’s right,” Mom agreed. “But Joseph kept trusting God even when everything seemed to be going wrong. He knew God was in charge.”

“How long was he in prison?” Jessie asked.

“He stayed in prison for two years. But then in one day, God had Pharaoh bring Joseph out of prison to explain his dreams, and Pharaoh made him a ruler over the whole country!”

“That’s a good reminder for you and me, Jessie,” said Dad. “We’ve been sitting here complaining and feeling sorry for ourselves because we had one bad day. But Joseph had lots of bad days!”

“I guess my day wasn’t so bad,” said Jessie.

“Nope. But it’s time for you to go to bed now,” Mom said as she helped Jessie out from under the big blanket.

“Good night, Dad! I hope you have a better day tomorrow,” said Jessie as she gave him a hug. 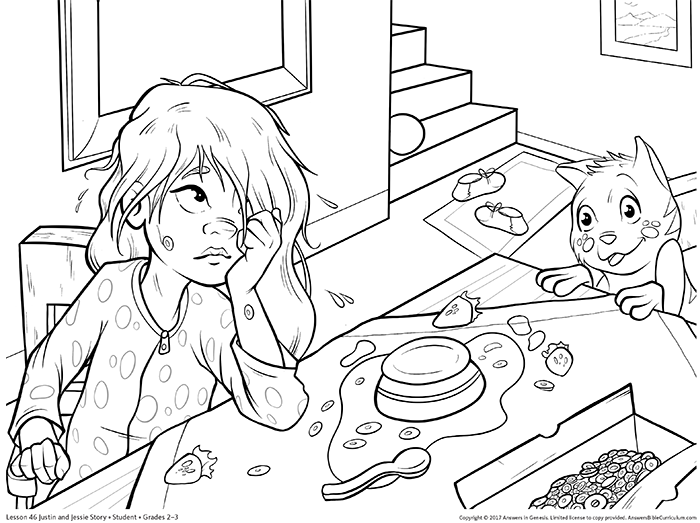 Previous Article What About Me? Next Article The Winner Is . . .