“Dad! Dad!” Justin shouted as he ran into the house. “Look what I just got!”

“I’m going to go put it together right now. Will you help me, please?”

“Oh, I’d love to help, Son, but I need to get outside and mow the lawn before it rains,” Dad replied as he put on his work boots.

“Okay,” Justin said with a frown. “After that?”

Justin went into the family room and sat down at the little table. He opened up the package and looked at the instructions. “I can’t even read most of these words,” he thought. “Guess I better wait for Dad.”

After a while, dinner was ready, then they would leave for kids’ club at church. Justin liked kids’ club, but he knew he always had to go right to bed when they got home. So he wouldn’t be able to work on his plane at all tonight!

“Can you help me build my plane tomorrow?” Justin asked Dad during dinner.

“I’ve got other things I need to finish up tomorrow after I get home from work. But how about if we plan to do it on Friday?” suggested Dad as he got up from his chair. He found a red pen and wrote on the calendar “build model plane” in the Friday square. “How’s that?” he asked Justin.

Justin tried to smile, but he really, really wanted to build his plane sooner than Friday. Friday was two days away. “All right,” Justin sighed as he went to grab his Bible for church.

The next morning Justin tromped down the stairs—thunk, thunk, thunk. He felt grumpy today since he knew he couldn’t build his plane. After breakfast, Jessie came over to play, but Justin didn’t really feel much like playing games—he wanted to build his model plane. Then he thought he could at least show the picture of it to Jessie.

“Come here, Jessie,” he said as he led the way into the family room. “See what I’m going to build?” He showed her the picture on the box then pulled out the instruction book.

“Cool! You’re going to build that? Will it really fly?” Jessie asked.

“No, it’s just a model that sits on the shelf,” Justin explained.

“How come you haven’t put it together yet?” asked Jessie as she picked up the instruction book.

“Oh. I thought you just follow the pictures here. See?” Jessie pointed to the pictures in the instruction book.

“Jessie!” Justin’s mom came to the door. “Your mom said it’s time for you to go home.”

“Okay! See ya, Justin.” Jessie waved as she headed out of the family room.

Justin looked at the pictures in the instruction book again. “Hmmm, maybe I can do this myself,” he thought.

He dumped all the pieces out on the table. “This must be the propeller, and these are wings.”

Justin started gluing different pieces together. It was kind of hard not to make a mess. The glue was very sticky. He worked and worked until, finally, he stuck the last piece, the tail, onto the end of the plane. 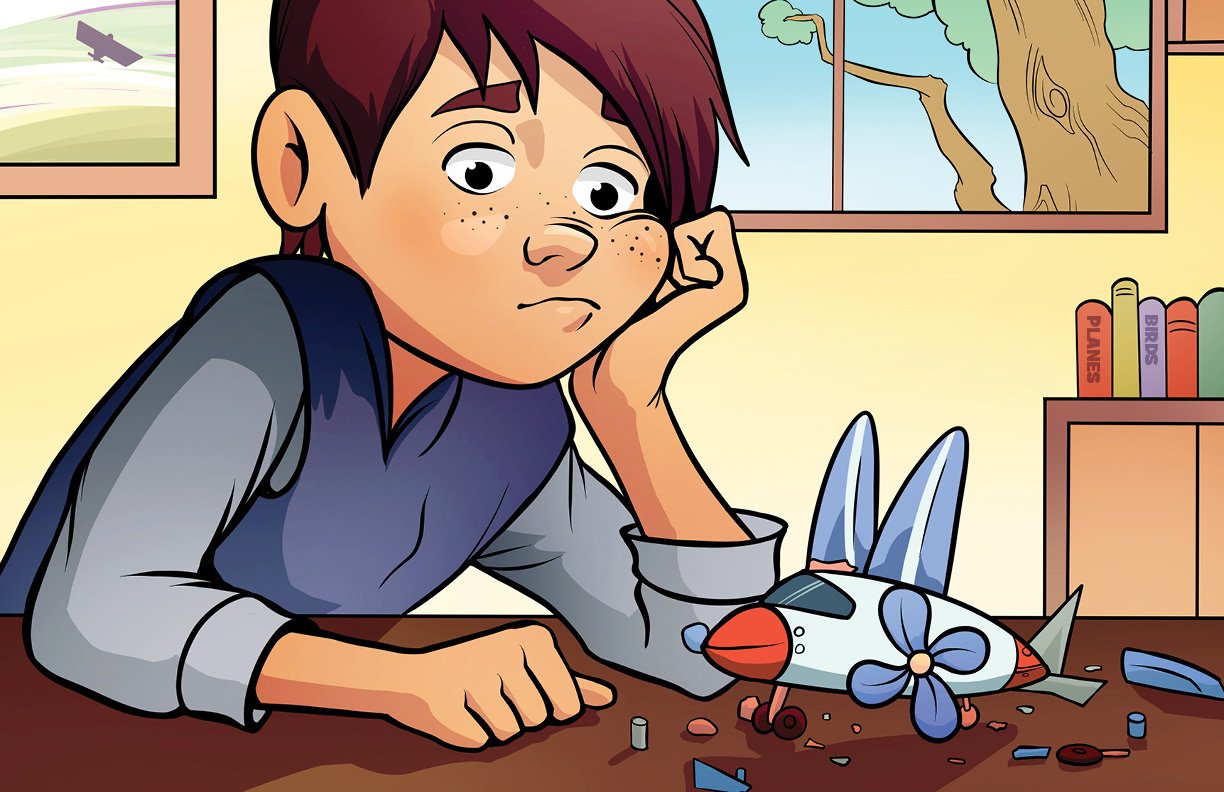 “There!” he said as he looked it over. “Now it just has to dry for a while.” Justin carefully set the model up on a shelf so Ellie wouldn’t be able to reach it. Then he went outside to play ball. He was proud of himself for figuring out how to put the plane together without any help.

Jessie came back over for a little while. “Guess what!” Justin said.

“I built my plane all by myself! I just followed the pictures like you said.”

The two friends ran inside to the family room to look at Justin’s plane. Justin carefully took it down from the shelf. As he set it down on the table, one of the wheels fell off—clunk!

“Oops. I guess the glue isn’t all dry,” he said as he tried to stick the wheel back into place.

“I don’t know, Justin,” said Jessie as she looked the plane over. “I think this piece might go over there instead.” Jessie touched the piece she was talking about—clunk—it fell off, too!

“Jessie, don’t touch it!” Justin hissed. “You’re going to break it. It has to dry first.”

“I’m sorry,” Jessie apologized. “But I thought the spinning thing went up here at the very front.”

“That’s called a propeller. And it goes right here where I put it,” Justin insisted. He had worked really hard on his plane and didn’t want Jessie to talk about it that way or break it.

“Hi, kids! How’s it going?” Justin’s dad asked as he walked into the room. He stopped at the table and looked down at the plane Justin had put together. “Oh, I see you decided to build it yourself.”

“Yeah! See? I did it all by myself!” Justin picked up the model plane to show his dad. But suddenly—clunk—there went the propeller again. Clack—there went a wing. Clunk, clunk—now the other wing AND the tail!

Jessie stood back and watched as Justin tried to keep his model from falling to pieces. She could tell he was getting upset. He had tears puddling up in his eyes. “Um, I’m going home now, bye!” she said as she jogged out of the room. She didn’t want to see Justin cry.

As another piece of the airplane fell off, Justin did start to cry. Dad sat down, and Justin crawled up on his lap for a hug. “Justin, I’m really sorry the plane came apart,” he whispered. “But why didn’t you wait for me? I was planning to help you with it. We can still put it back together tomorrow after I get home from work.”

Justin sat back. He felt so embarrassed and mad at himself for not waiting for Dad to help him. “You’ll still help me?” Justin sniffled.

Justin nodded and wiped his eyes. He went back to the table and picked up all the little pieces of the model and put them back in the box to wait for tomorrow.

The next afternoon, Dad surprised Justin by coming home early from work. Now they could build the model plane together!

The two of them worked side by side. Dad helped Justin figure out where all the pieces were really supposed to go. Justin held the pieces while his dad glued them on. When it was all finished, they sat back and smiled.

“Good job, Justin!” said Dad. “Thanks for letting me help you. I had fun.”

Justin grinned. As he looked closely at his beautiful plane, he noticed the propeller. “Hmmm, that’s funny,” he said.

Justin laughed and pointed at the propeller. “Jessie was right; the spinning thing DOES go there.” 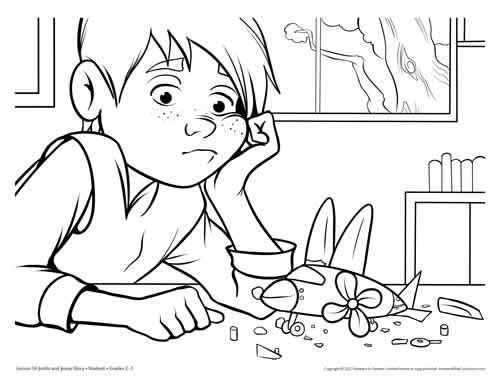