“Good girl, Penny!” Matt exclaimed as he rubbed his dog’s silky fur. Matt and his brother, Craig, had taught Penny to roll over.

“She’s getting really good at that,” said Jessie.

“Look at her. She’s saying, ‘Give me a treat, Matt. Please?’” Justin said in a squeaky voice.

The four kids laughed. Penny did look like she wanted a treat. “Hey, wouldn’t that be cool if she really could talk?” said Matt.

“Wait a minute!” Justin jumped up. “Matt, I just remembered. Our Sunday school teacher said she’s going to tell us about a talking donkey.”

“Why don’t you come to church with us and find out for yourself?” asked Justin.

“I’d like to hear about a talking donkey. It sounds funny,” Matt replied.

“Don’t get your hopes up, Matt,” said Craig. “You know Mom doesn’t believe that Bible stuff.”

“Maybe if I ask her nicely, she’ll say yes.”

“I’m sure she won’t if you say you’re going to hear about a talking donkey—like that would ever happen,” Craig scoffed and went into the house.

“I’m still gonna ask Mom if I can go,” Matt said as he turned back to Justin and Jessie.

“Okay. We’ll see you later, Matt. Bye!” said Justin as he and Jessie headed home for dinner. “I hope Matt can come.”

“Me too,” Jessie replied.

That night, while Justin’s parents tucked him into bed, he told them how Matt said he wanted to come to church, but his mom might not let him. “I wish there was something I could do to make his mom believe the Bible,” said Justin.

“Justin, we could ask God to intervene,” said Dad.

“What does that mean?”

“It means to come between. Matt wants to go to church, which would be a good thing, but his mom doesn’t want him to. So we’re asking God to come between the two of them, and change the situation for good.”

“Okay, let’s pray that God will intervene,” said Justin as he bowed his head to pray.

Sunday got closer and closer, but Matt still didn’t have permission to go to church. Justin kept praying, and so did Jessie. Finally, early on Sunday morning, the phone rang. “I wonder who that is?” said Justin’s mom as she picked up the phone. “Hello? Oh hi, Lisa. We’re getting ready for church right now, but he’s certainly welcome to go with us. Okay, bye.”

“Who was that, Mom?” asked Justin.

“That was Matt’s mom. She got called in to work this morning, but Craig is at his friend’s house, so she needs us to watch Matt all day—starting right now.”

A little while later, Matt climbed into the van with Justin’s family, and they headed to church. Justin introduced Matt to his teacher, Mrs. Jacobs. “I’m so glad you’re here, Matt,” she said.

During class the kids listened eagerly as Mrs. Jacobs told how God made Balaam’s donkey talk to him out loud. The class laughed when she said Balaam actually talked back to his donkey, too.

“That was great!” said Matt on the drive home. “Was it really true? It would be super awesome if animals could really talk.”

“Thanks for taking me with you. Let’s go check on Penny.” Matt and Justin climbed out of the van and ran to Matt’s backyard to say hello to Penny. “Hi there, Girl. How are you?” he said as he stroked her soft ears.

Matt and Justin stopped and stared in amazement at the dog. They looked around, but didn’t see anyone else there.

Justin and Matt looked at each other, confused. Could it be? Could Penny really be talking? That would be amazing!

“Ha ha ha! I got you guys!” Jessie jumped out from behind the wall of the house. “You should’ve seen the looks on your faces,” she said, laughing.

“Jessie! We should have known it was you. That was a pretty good trick,” said Justin as he sat down on the grass.

“Aw, I was hoping God would make Penny talk like the donkey,” said Matt as he slumped down on the steps to pet his dog. “How come God doesn’t do neat stuff like that anymore?”

“I don’t know. I guess that was just what would make Balaam listen,” Jessie replied.

“Remember how your mom said you couldn’t go to church? We’ve been praying every day that God would make it so you could come,” Justin explained.

“And then my mom had to go to work this morning,” Matt said.

“Wow! That is cool! Going to church is a good thing. So maybe that’s why God made it happen,” Jessie added.

“Hey, yeah!” Matt reached down to pet his dog. “What do you think, Penny? Maybe God is real, huh?”

Penny gazed up at Matt. “Yes Matt. God is real,” said Jessie in her squeaky dog voice, which made them all laugh. 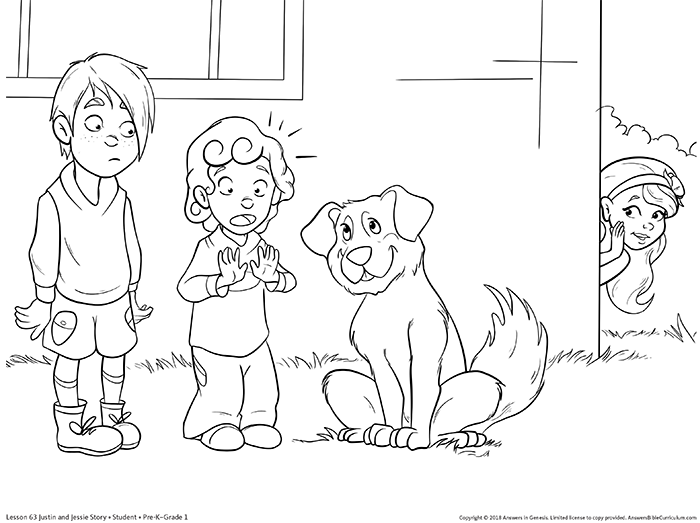