It was Saturday, and Justin woke up feeling excited. Last Saturday, he and his dad cleared the weeds out of the corner of the backyard and started building his fort. Since then, they worked on it almost every day when his dad got home from work. Now it was nearly finished.

Justin jumped out of bed and raced to put on his work clothes. Today the fort would be all done, and he could start playing in it.

As Justin went downstairs, he heard his mom say to his dad, “Looks like the weather is supposed to turn rainy this afternoon, with possible thunderstorms.”

Justin came into the kitchen and sat down for breakfast. While they were eating their scrambled eggs and toast, Justin asked his dad, “Do you think we’ll be done before the thunderstorm comes?”

“I hope so. I guess we’ll have to work fast,” said Dad. “We’re almost done. It shouldn’t take too long.”

Pretty soon, they headed out to the back corner of the yard. Dad took out the tools they needed to finish the fort. The swings were already hanging up and the fort was sitting on top, but it didn’t have a roof yet. They still needed to put that on and fasten the slide so it wouldn’t wriggle.

“Hmmm. Those dark clouds are getting closer,” said Dad as he tightened a bolt on the slide.

“I hope I can play in my new fort today,” replied Justin as he handed another bolt to his dad.

“Let’s see here,” said Dad as he looked over the instructions. “I got that, did that, and tightened those up. Last thing is the roof. I’ll need those screws right there.” Dad pointed to the last big screws in the box. “I feel a little like Noah,” he said as he climbed up into the fort to attach the roof piece.

“Noah? What do you mean?” asked Justin.

“Well, I’m trying to finish building this before the rain comes.”

“Oh, I get it,” laughed Justin. “Noah had to build the Ark before the Flood came, right?”

“That’s right,” said Dad. “Hand me the last screw, and then I think we’re done!”

“Hurray!” shouted Justin. He jumped up and down doing a “happy dance” when suddenly, rain began plopping down all around him. “Whoa!” he cried.

“Climb on up, Justin!” Dad reached down and helped Justin up the ladder.

Justin climbed as fast as he could into the fort just as the rain started to beat down harder.

“Wow! It’s a good thing I got up here or I would’ve been totally soaked,” Justin laughed.

“That’s for sure!” Dad replied as he peered through the window holes at the pouring rain. A rumble of thunder sounded nearby.

“That was close! We finished just in time,” Justin said. 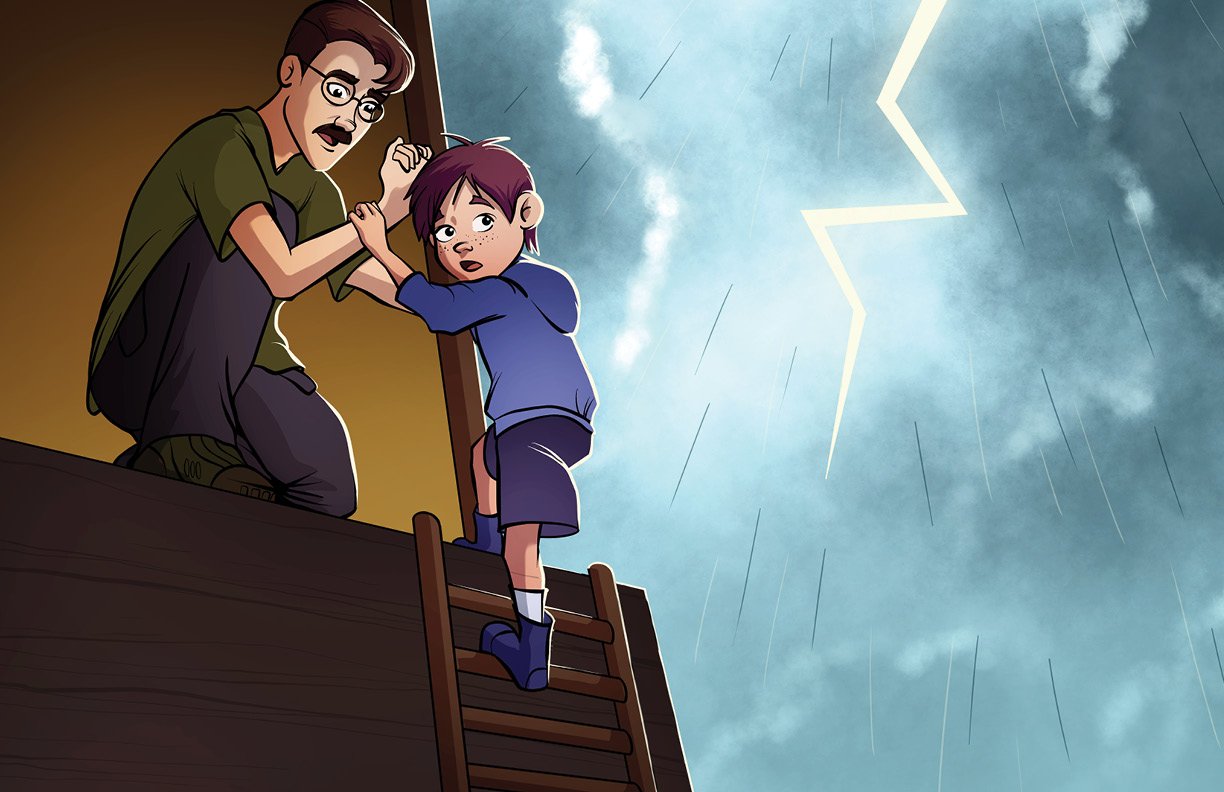 Justin and his dad sat back against the walls of the fort to wait for the storm to stop.

“Looks like I didn’t get one of the screws tight enough.”

“Can you fix it?” asked Justin.

“Yep. I just need my toolbox. Oh no! I left it on the ground!” Dad looked out the window.

“I’ll get it!” Justin jumped to his feet and peered down the slide.

Justin nodded then swooshed down the slippery slide. It was fast! He scrambled to grab the toolbox and hand it up the ladder to his dad.

“Got it!” Dad set the toolbox in the fort then pulled Justin up the ladder. “You’re all wet!”

Justin shook his head, and water sprayed from his hair all over his dad.

“Whoa! You’re like a walking sprinkler!” Dad said. They both laughed.

Dad got his screwdriver and reached up to tighten the screw. “You know,” he said while he worked, “pulling you in the door of the fort reminds me of how Noah and his family had to enter the door of the Ark to be saved.”

“Why did God choose Noah and his family to be saved?” Justin asked.

“That’s an excellent question, Justin,” said Dad. “Noah was a sinner just like everyone else, and like you and me. But Noah loved God and wanted to obey Him.”

“So Noah built the Ark like we built our fort?”

“Yes, only it took Noah around 75 years to build the Ark. It only took us a few days to build this,” said Dad as he checked to make sure no more rain was leaking into the fort.

“That’s a long time to build something. So what happened to the people who didn’t get on the Ark?”

“The Bible says that everyone who was not on the Ark died in the Flood.”

“It’s a good thing Noah got on the Ark then.”

“But Jesus isn’t a door,” said Justin as he scrunched up his face.

“No, Jesus isn’t an actual door made out of wood.” Dad knocked on the wooden wall of the fort, then continued, “But He’s like a door because He is the only way for us to be saved from our sins.”

“I get it. It’s like I had to go through the door to get inside the fort so I would be safe from the pouring rain, right?”

“Time to try out the slide again,” Dad suggested with a grin.

Dad sat on the slide, and Justin jumped on his lap. 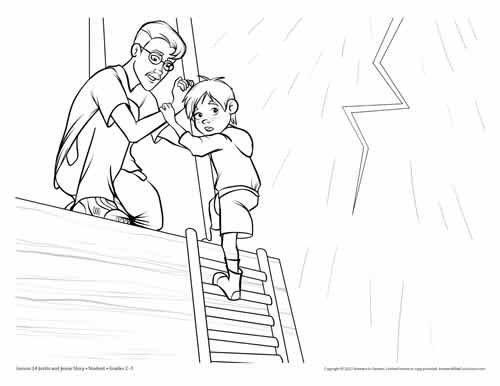 Previous Article Covering the Smudge Next Article Mercy for Justin