“Look at all the strawberries!” cried Justin and Jessie together. They had been playing in Justin’s backyard and just walked into the kitchen.

Both of their mothers were moving around in the kitchen getting pots and pans and jars and lids ready. All around them were piles of huge, red strawberries! It was strawberry time. They were going to make strawberry preserves.

“Yummy! Can I eat one? Please?” begged Justin. “Ooh! I want this one–it’s humongous! Here’s another big one for you, Jessie.”

“Thanks, Justin,” she said as she bit into the ripe, red berry. The juice trickled down her chin. Jessie giggled, “Mmm, thish ish sho good!”

“Alright, you two. I need both of you to start washing the berries in the sink, OK?” Justin’s mom told them.

“OK!” The two kids climbed up on stepstools and started rinsing the strawberries with water. Some of the berries were already pretty clean, but others had mud or dirt on them—yuck!

“Eww! We don’t want any of that in our strawberry perderves,” said Justin.

“Yeah, that!” Justin laughed, too. Then he asked, “What are preserves anyway?”

Jessie’s mom answered, “It’s like jam. You can spread it on your toast for breakfast or even make a peanut butter and strawberry preserves sandwich.”

Jessie scrunched up her face. “Isn’t it easier just to say jam?” she asked. 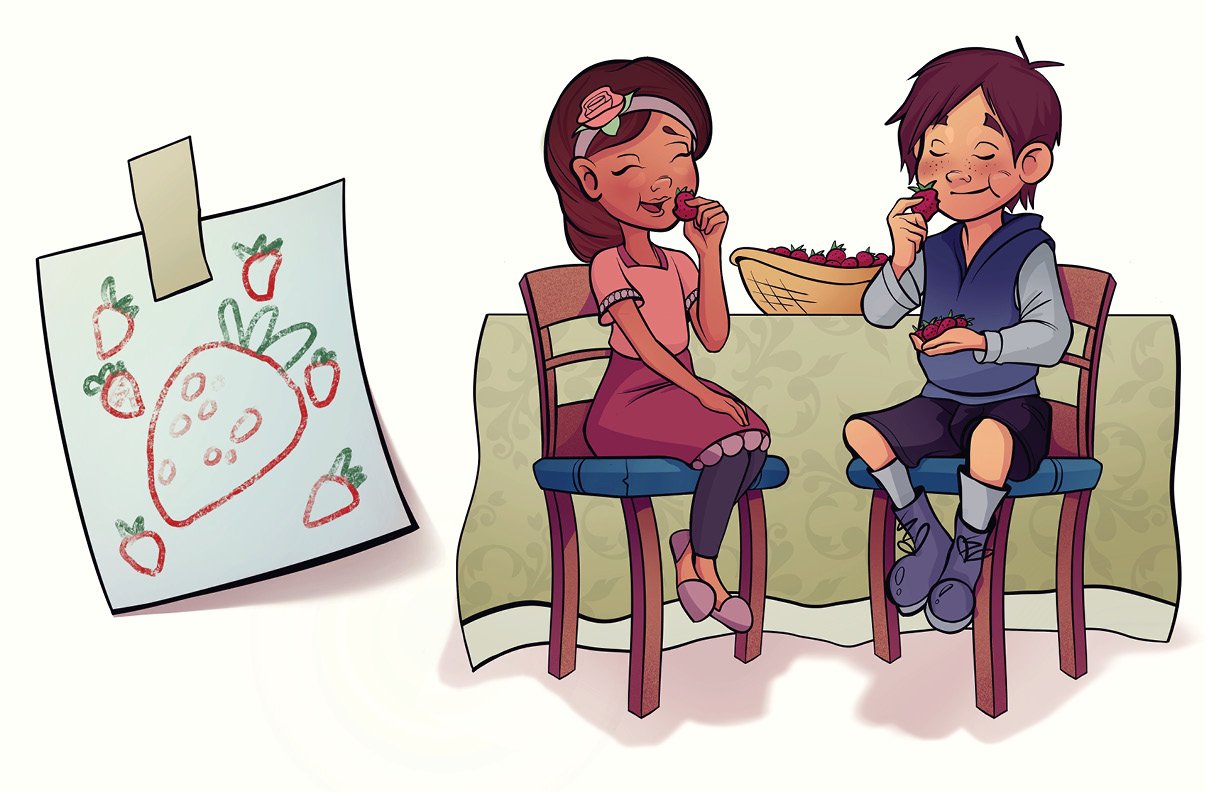 After a while, the kitchen started to smell like sweet strawberry jam. The berries bubbled as they cooked on the stove. Justin’s mom added sugar and stirred the berries in the pot.

Justin watched as she stirred. “Hey, Mom,” he said. “How come it’s called preserves? What does that mean?”

“Well, Justin. When you preserve something, you keep it from being ruined or spoiled. And in this case, I’m preserving these strawberries by cooking them up with sugar. That keeps them from spoiling. And they last a long, long time, so we can eat them later in the year when there aren’t any fresh strawberries around.”

“Mmmm. I can’t wait! Come on Jessie, let’s go draw for a while. I’m going to draw a hundred strawberries!” Justin jumped down from his stool and ran into the family room. He grabbed some crayons and started drawing. “Help me with my strawberries. You can draw some on that side of the paper, and I’ll draw on this side.”

Jessie sat beside him and began to draw her strawberries. “Hey, I know!” Jessie had a great idea. “Let’s make this into a card for our moms. It can be a thank-you card for making the strawberry jam for us.”

“Yeah! We can make it real neat,” agreed Justin.

Pretty soon, it was time for lunch. Justin and Jessie ran to the kitchen to eat. They were in a hurry. They already drew all the strawberries in their picture, but they still had to put some green leaves on them.

Mom finished feeding Ellie and let her down from her high chair to go play in the family room. Ellie liked to sit at the little table and color with her big crayons.

“Can I taste the jam, Mom?” asked Jessie.

“Sure. Come over here, and I’ll get some spoons.” Jessie’s mom dipped the spoons into the jam and let it cool a bit. Then she handed the spoons to the kids.

“Now we have to go and finish our drawing. We made it special for you,” said Justin.

Jessie and Justin ran back to the family room where they were drawing at the little table. Suddenly, they stopped and stared in horror! Oh no! There sat Ellie with her big, purple crayon scribbling all over the lovely, red strawberry picture that Jessie and Justin had worked so hard on.

“Ellie, no!” yelled Justin. He could feel tears coming into his eyes. “We made that for Mom.”

“What’s the matter?” Mom hurried into the family room. She could tell something was very wrong.

“Ellie ruined our picture,” Jessie explained. “We left it here when we went to eat lunch. And when we came back, she was coloring all over it.”

“Oh, I’m so sorry. I’m sure Ellie didn’t know it was yours. If you want to make another one though, I can bring Ellie back to the kitchen with me so she won’t do it again.”

Justin and Jessie sadly agreed. They sat down and started all over again. They both knew that Ellie didn’t do it on purpose. After all, she was only two years old—still just a baby.

Finally, Jessie colored in the last green leaf on the picture. They both wrote their names on it. Then they tried to remember how to spell “thank you” and wrote that the best they could.

“Mom!” they said together. Both moms turned and said, “Yes?” at the same time. It was kind of funny.

The kids handed their picture to Justin’s mom. “Why, how beautiful! Thank you. How about if I put it up on the fridge so ‘little Miss Ellie’ doesn’t color on it again. We can preserve it that way.”

“Huh? Our picture only has pretend strawberries, you know. You can’t make jam preserves out of it,” Justin explained.

“I know that, Silly,” said Mom as she gave Justin a hug. “But to preserve something also means to keep it safe so it doesn’t get ruined or destroyed.”

“Hey! You know what?” said Jessie’s mom. “That reminds me of the king we were reading about in the Bible yesterday. You remember, don’t you Jessie? Daddy read about King Jehoiakim.”

“Oh, yeah! He didn’t like God’s Word, so he cut it up and threw it in the fire. It got all burned up,” said Jessie.

“What?! That’s terrible,” replied Justin, “What did God do?”

“The same thing you did after Ellie ruined your picture,” said Jessie’s mom. “God told Jeremiah, the prophet, to start over again. And he did. God’s Word is very important, and God won’t let anybody destroy it. He preserves it and makes sure it stays safe so we can all use it to learn about Him.”

Mom laughed and said, “Well, why don’t you come and help us make some strawberry shortcake for dinner.”

“Yay!” shouted Justin and Jessie as they grabbed their stepstools. They liked strawberry time!