A Puppy and a Prayer

“She’s in the backyard. Come on! I’ll show you.” Matt led the way to the fenced yard and pointed to the far corner. “There she is.”

“Woof!” A shiny brown puppy turned and sprang toward them.

“She’s big. And she’s so happy.” Justin grinned as the dog jumped around trying to get someone to play with her.

“Down girl, stay down,” Matt instructed his new pet. The puppy was so excited to see the kids that she ran in circles before she attacked Jessie’s shoelaces.

“What’s her name?” asked Jessie as she reached out to scratch behind the pup’s ears.

“I haven’t named her yet. I’m not sure what to call her,” replied Matt with a thoughtful frown.

“She’s so pretty. Her fur looks the same color as the pennies I put in my bank yesterday,” Jessie commented.

“Hey! How about calling her Penny?” suggested Justin.

Matt thought for a moment, then smiled and nodded. “That’s it. I’ll call her Penny. Thanks guys. That’s a great name for her.”

The kids played with Penny until it was time for Justin and Jessie to go home for dinner. Penny wagged her tail and followed them to the gate, where Matt held onto her collar so his friends could leave without her escaping.

The next day was Saturday. Justin was finishing his breakfast when there was a knock on the back door. Justin’s mom opened it. Jessie was standing there with Matt, whose eyes were red and puffy.

Jessie and Matt walked into the kitchen. Matt was too upset to speak, so Jessie did the talking. “Matt’s dog, Penny, ran away early this morning.”

“And my mom’s at work,” Matt sniffed, “and my brother biked to the store to get some milk—and I can’t find my dog.”

“Maybe she dug under the fence or even jumped over,” said Justin’s dad. “We can help you look for her, Matt.”

Just as the kids were about to go out the door to search for the lost puppy, Justin’s dad stopped them. “Hold on, everybody. I think we’re forgetting something.”

They all looked at him. “We can’t do this on our own,” he said. “I think we should pray and ask God to help us find Penny.” They bowed their heads as Justin’s dad began to pray, “Dear God, you’ve shown us in the Bible that you are the one true God, and we know you can bring Penny safely home. Please guide us as we look for her. Help us find her quickly. We ask in Jesus’ name. Amen.”

“I’m worried,” Matt told Justin. “Do you really think the God in the Bible can still help us? I mean, the Bible’s really old.”

Justin thought for a minute. “Well, the Bible may be old, but it’s true.”

“Yeah,” Jessie added, “And my mom and dad say that the same God who did awesome things in the Bible is the same God we pray to today.”

While Justin’s dad and the kids went out to search, his mom stayed home and called the neighbors to ask if they had seen a puppy. After talking to almost every neighbor on their street, his mom was about to give up. Everyone had said no—until she called Mrs. Myers, who lived at the very end of the street.

Meanwhile, Justin’s dad and the kids had walked all around, searching and calling for Penny. But no one found the poor, lost puppy.

“What are we going to do?” said Matt as he slumped down on the front steps of his house. “I don’t think praying did any good. Maybe God doesn’t care.”

Just then, the cell phone in his pocket rang. “Hello?” he answered. It was Justin’s mom. “Guess what!” she said. “Mrs. Myers just saw Penny going toward the park.”

“Wonderful! Thanks, Honey!” said Justin’s dad as he put his cell phone away. “That was Mom,” he said to Justin. “Someone saw Penny heading to the park. Let’s go!”

“Really?” Matt jumped up, and they all raced after him down the sidewalk to the park. When they got there, they spread out calling for Penny. Finally, Matt spotted her curled up under a shady tree.

“Penny!” Matt cried as he ran to his dog.

Penny sprang toward Matt, almost knocking him over. “Woof!” she barked as Matt gave her a huge hug, burying his face in her soft, warm fur. “Penny, I’m so glad to see you,” he said.

“Hurray!” shouted Justin and Jessie as they crowded around Matt and Penny.

“Wow! Wait ‘til my mom hears about this,” Matt declared as he snapped the leash onto Penny’s collar.

“I’m so glad you found her, Matt,” said Jessie.

“Yeah, said Matt, “I guess God really can help us.”

“He sure can, Matt,” replied Justin’s dad as they walked back down the sidewalk.

Matt looked at Penny trotting along beside him and smiled. “Come on, girl; let’s go home.” 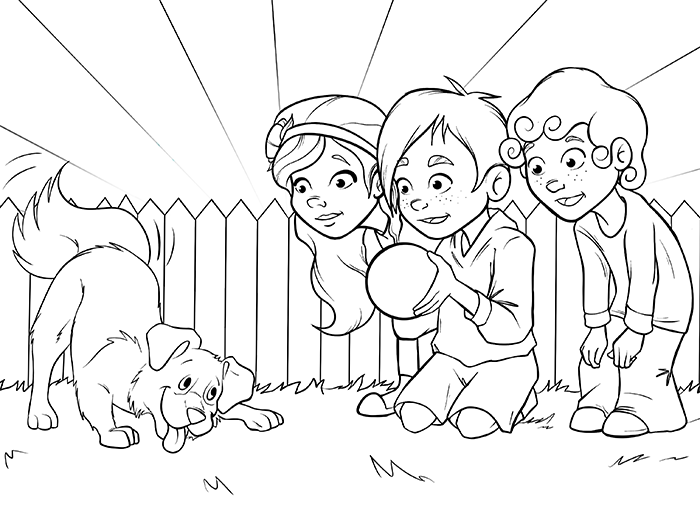