Justin woke up on Saturday morning feeling like he wanted to just turn over and go right back to sleep. Suddenly, he remembered—today he was going to help his dad build a fort in the backyard!

The fort would be tall like a tower with a ladder for climbing up. And there would be a slide going out the back door for getting down. There would also be two swings on the side—Ellie would like that. Justin felt excited. It was going to be great!

Justin climbed out of bed and stretched. He got dressed and headed downstairs for breakfast.

His dad was already at the table eating eggs and bacon. “Good morning, Justin. Are you ready to get going on the fort today?”

“I sure am! I can’t wait to play in it. How long will it take to build? Can I hammer the nails? Can I play in it today?” Justin was full of questions.

“Whoa!” said Dad. “We have some things to take care of first.”

“Oh. Like what?” Justin asked, feeling a little let down.

“Well, for one thing, we need to clear all the grass and weeds out of the back corner of the yard. That’s where we’re going to build.”

“Can’t we just build on top of the weeds?”

“No, Justin. We need to pull them out. That way they won’t creep back in and make a mess.” 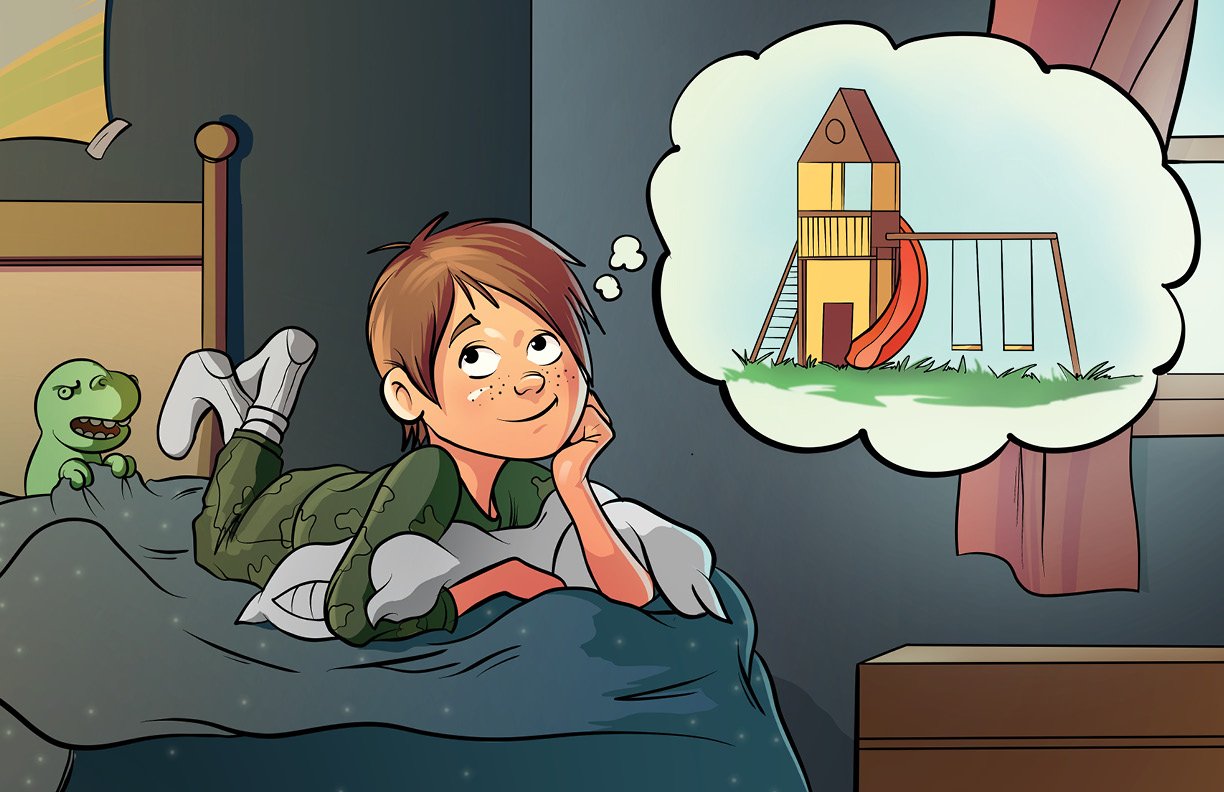 Justin sighed. He was tired today, and pulling weeds didn’t sound like much fun. But he really wanted his fort, and he knew the more he helped the sooner they could build it.

Justin and his dad took some garden tools outside. Justin had his very own gloves. They were red with blue stripes. He usually wore them when he helped Mom in the garden.

“Watch out for these,” Dad warned as he pointed to a weed that had “poky” prickles all over it. “These are thistles, and they hurt if you touch them. I’ll pull those out. You can work on these here.” Dad showed Justin a patch of different weeds that wouldn’t hurt him.

Justin got to work. Most of the weeds came out easily, but Justin had to tug really hard on some of them. He even pulled one out that was as tall as he was! He yanked so hard that he landed flat on his bottom and the dirt splatted him in the face.

“Phew! This is hard,” Justin mumbled as he turned to get up. When suddenly—zing!—he felt a sting going up his arm. “Ow-ow!” He looked down and saw that his arm was right beside a prickly thistle!

“You okay?” asked Dad as he hurried over. He looked at Justin’s arm. There was a red splotch where the thistle had poked him. “It doesn’t look too bad. Let’s take a break and put some cream on that.”

They walked to the back porch where Justin sat down on the steps. He was too dirty to go inside right now. Mom brought out some creamy medicine and gently spread it on the sore spot. Then she put a bandage over it. “Does that feel better?” she asked.

“Yeah, thanks. Can I have something to drink, please?”

Mom went into the kitchen and brought back some lemonade and cookies.

“Dad,” Justin said as he munched on his cookie, “how come there’s gotta be weeds and thistles? Why did God make those? And how come they have to hurt?” He turned his arm so his dad could see his bandage.

“Huh? I thought sin was doing something bad.” Justin was a little confused. “You mean it’s bad to pull weeds?” he asked.

“No. I mean there are things in this world that are here because of sin. Remember how the Bible says Adam and Eve were in God’s perfect creation, and then they sinned?”

“God had to punish that sin, so He cursed the ground and made thorns and thistles grow.”

“Wow! I didn’t know that’s where they came from.”

“Yep. That’s what the Bible tells us,” Dad replied. “God also told Adam that he would have to work very hard. He’d have to get rid of the weeds and thorns so he could grow food for his family.”

“We’ve been working hard trying to get rid them—that’s for sure!” said Justin as he held up his empty cup for more lemonade. “So what about other bad stuff like getting sick? Are they from sin, too?”

“Yes, they are,” Dad replied. “Because of sin, the world is not like God created it to be anymore. Sin changed it. Now there are thorns and thistles and pain and sickness.”

“You mean omnipotent? Yes, God is all-powerful. And He will make it all right again at the Consummation.”

“The Consummation. That’s when God will make a new heaven and a new earth. There won’t be any sin there. It will all be perfect again. And everyone who believes and trusts in Jesus will be there, too,” Dad said with a big smile.

“That sounds amazing!” said Justin. He looked at the big dirty patch where they were working in the yard. “Hey! It’s kinda like what we’re doing today. We’re cleaning out all the weeds and thistles that came from sin and getting rid of them so they don’t hurt us anymore. And we’re building a brand new fort instead.”

“Well, yeah. I guess it is a little like that.”

“But for now, we have my fort to build!” Justin shouted as he hopped off the porch steps. 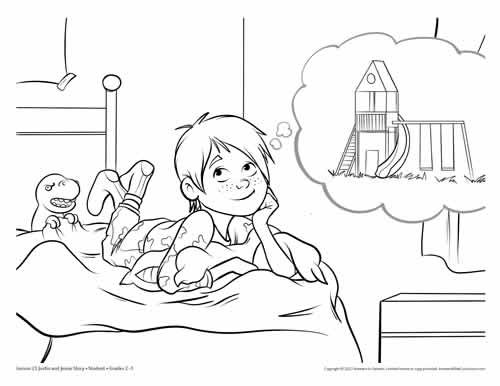