Jessie sat quietly in church with her mom and dad. She swung her feet back and forth, being careful not to bump the chairs in front of her as she listened to the man up front. His name was Mr. Andrews. He was a missionary to a faraway country. Now he was back to visit friends and tell everyone about his work.

“And these are some of the kids at the little church where we teach Sunday school,” said the missionary.

Jessie stared at the pictures of the kids up on the big screen. They had happy smiles, but their clothes were dirty and they seemed kind of skinny.

The missionary continued, “Most of these kids only get one meal a day, so we feed them at the church. Here’s what they usually eat, but many of them are sick since they don’t get much else.” The picture that flashed on the screen showed a bowl of white rice. That was all.

“Wow!” Jessie thought. “I wonder if they ever get strawberries or chocolate chip cookies.”

After Mr. Andrews was finished speaking, Jessie’s dad shook the missionary’s hand. When it was Jessie’s turn to say hello, she asked, “How come those kids only eat rice? I mean, why don’t they eat noodles or something instead?”

“Well, these people don’t have much money. Rice doesn’t cost as much as other foods. We try to give them fruit and vegetables to keep them from getting sick, but that costs extra, so it’s hard to get enough for everyone.”

On the way home, Jessie’s family stopped to get a treat. “I wonder if any of those kids ever tasted ice cream,” Jessie said as she licked her chocolate ice cream cone.

“Hmmm. I would guess they probably haven’t. But maybe they’ll get a chance to someday,” Mom replied.

Later, Jessie got ready for bed and climbed in, all the while thinking about the kids in the pictures. “I wonder if those kids have beds and pillows like I do,” Jessie said as her mom and dad kissed her goodnight.

“Probably not. There are many countries in the world where some kids don’t have anything except the clothes they are wearing,” Dad told her.

“But that doesn’t seem right!” Jessie said as Mom tucked her blankets snugly around her. “I don’t think they should only eat rice every day. They need good stuff, too.”

“Well, Mr. Andrews did say that we could send money to help. Maybe you could give some of your money from your piggy bank,” Dad suggested.

Jessie smiled and nodded, but then she remembered something. “But I’ve been saving my money for that new doll with the pretty hair.” Jessie frowned. She didn’t really want to give that up.

“It’s up to you, Pumpkin. Let’s pray about it, then you need to go to sleep.”

After they prayed, Jessie went to sleep still thinking about the skinny little kids. The next morning, Jessie woke up with a great idea! She jumped out of bed and ran to her piggy bank. “Maybe I’ll have enough money to buy my doll and then give the rest to Mr. Andrews for the kids,” she said to herself.

Jessie poured all the coins out. “Ummm. Pennies equal one. I think this equals five. I forget how much this is.” She looked closely at a quarter then set it back down. “I can’t count all this, but I know it must be enough. I’ve been saving for a really long time,” she mumbled as she went downstairs for breakfast. 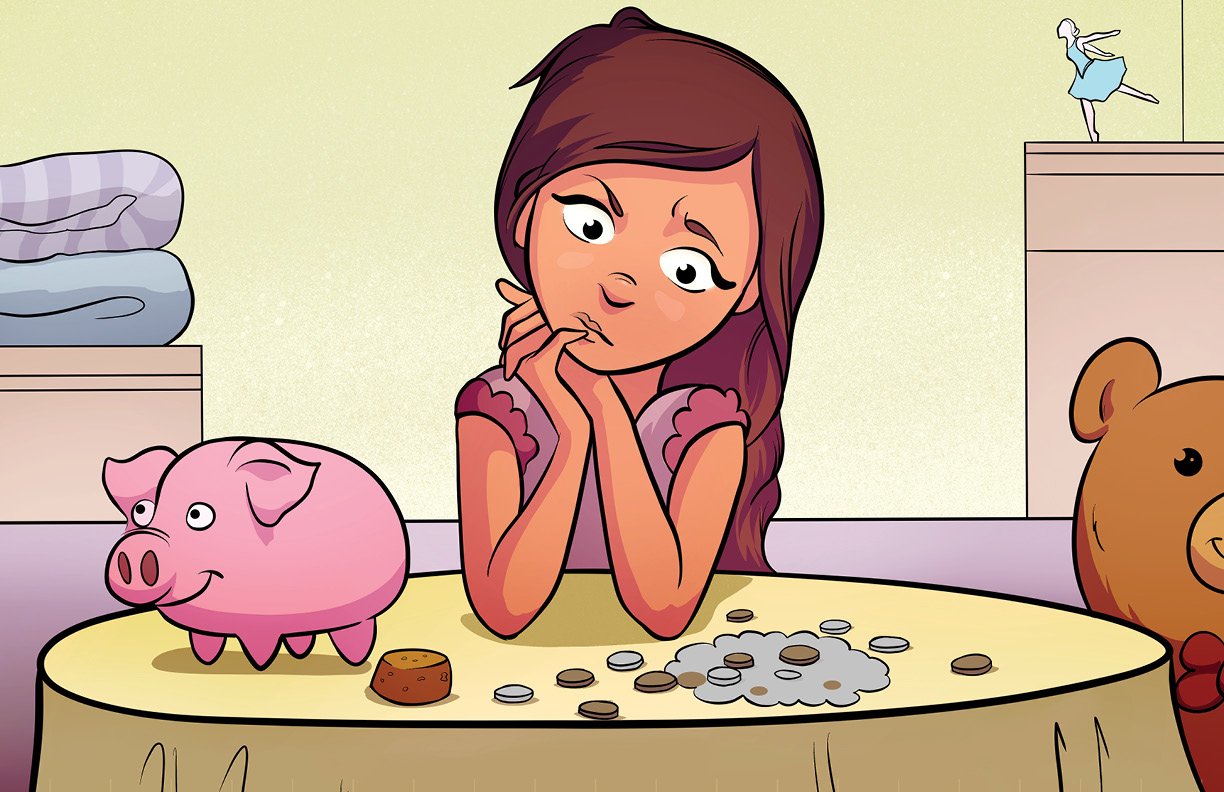 “What did you say?” asked Jessie’s mom.

“Oh, I was just wondering how much money I have now. I’ve been saving a long time, but I can’t count it all by myself.”

“I can help you count it after we eat,” Mom replied.

Jessie gulped down her oatmeal. Then she and her mom went upstairs to count the money. There were lots of coins to count. Finally, they got to the last few pennies.

“Is that enough for my doll?” Jessie asked.

“So if I buy my doll, I can give the rest to the missionary,” said Jessie.

“Well, I suppose so. But after you pay tax, you’ll only have about ten cents left,” Mom explained.

“Oh.” Jessie was so disappointed. Ten cents wasn’t enough to give to the missionary.

“Well,” Mom said, “what do you think would please God the most?”

“You mean I should give it all to the kids?”

“Not necessarily. Sometimes God asks us to do things that seem really hard. But we can show God that we love Him and want to please Him by giving up something else that we love.”

Jessie thought hard. She really wanted the doll with the long, curly hair. Then she could play dolls with her cousin Emily. She had been saving her money for a long, long time. But she also loved God and wanted to make Him happy. Could she give up the doll?

“Think of it this way, Jessie,” Mom said, “you can always save up again for a doll. You might even get one for Christmas or your birthday, like Emily did. But Mr. Andrews is here now and will be leaving soon to go back to his missionary work. So if you’re going to give something to help those kids, now would be the best time to do it.”

Jessie thought about the little kids in the pictures again. She really wanted them to be able to eat better. And if giving her money would help them and make God happy, then that’s what she wanted to do.

“Okay,” Jessie decided. “I’ll give the money to the kids.”

Jessie’s mom helped her put the money into an envelope. Later, when her dad got home, Jessie told him about her decision.

Dad said, “I’m proud of you, Pumpkin. I know that God will be pleased, too.”

A couple days later, Jessie and her family went to church for kids’ club. Mr. Andrews was there again, talking to the kids some more about his work as a missionary. When it was time to go, Jessie went up to Mr. Andrews and handed him the envelope with the money from her piggy bank. “Here, Mr. Andrews. There’s 15 dollars and 55 cents in here for the kids. Do you think you can use this to give them some good stuff like strawberries or something?” she asked.

“Oh, my! That’s a lot of money. I’m sure I can buy some really good food for them, Jessie,” said Mr. Andrews. “Thank you so much.”

Jessie smiled. She felt really happy. She knew her parents were pleased, Mr. Andrews was pleased, and even the kids would be pleased when they tasted the good food. But most of all, she was happy because she knew she made the right choice and pleased God, too! 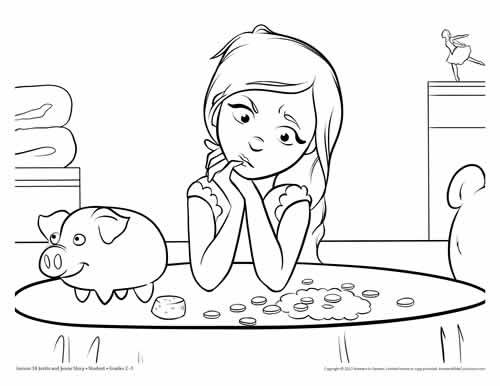