“All right class, line up at the door with your lunch bags,” instructed the schoolteacher, Mrs. Bentley. “We’re going to walk down to the park now.”

Justin and Jessie’s class headed out the door of their school and crossed the street together. They turned and walked down the sidewalk, chattering and laughing.

“This is fun,” said Jessie. “I wish we could have lunch at the park all the time.”

“Me too,” Justin replied. “But I think we have to look at a statue before we get to eat. I’m hungry, so I hope it doesn’t take too long.” Justin’s stomach growled.

Once at the park, they stopped in front of a tall statue of a man. “This is the memorial we’re going to talk about today,” said Mrs. Bentley. “Gather around so you can hear Mr. Nelson tell us all about it.”

The class moved in close to Mr. Nelson, the caretaker of the park. “Hi, kids,” he began. “This is a statue that was built to remind us of a man named Nathan Greenwood. He was a hero in our town. Did you know that many years ago, there was a huge fire that swept through half the city?”

Mr. Nelson continued, “Mr. Greenwood put all the women and children in wagons to get them out of town. Then he gathered all the men he could find, and started fighting that fire. But their little water buckets didn’t help much against the blaze.”

“What happened next?” Justin asked eagerly. He forgot all about being hungry.

“Just when they all thought the whole town would turn to ashes, rain began to pour down. Everyone said Mr. Greenwood was a great hero—but he didn’t think so. He told everybody that God was the real hero.”

“Because God made it rain?” Jessie asked.

“Is that why the statue is holding a Bible?” asked Ben.

“Yes. Mr. Greenwood believed in God and the Bible.”

Jessie tipped her head back to look all the way up to the top of the statue. “Hey, he has a fireman hat on,” she said.

“That’s right. After the fire, everyone in town was scared that it might happen again. They asked Mr. Greenwood what to do. He told them to form a fire department.”

“You mean with fire engines and sirens and stuff?” asked Michael.

“Yes. Only in those days, the fire engines were wagons with fast horses to pull them. Mr. Greenwood started reading about fire and how to fight it. He gathered as many men as he could, and taught them to fight fires.”

“Did they ever have a fire again?” asked Justin.

“As a matter of fact, they did. But this time, Mr. Greenwood and his firefighters were ready. They were able to put it out before it could spread.”

“Thank you very much, Mr. Nelson,” said Mrs. Bentley. “Class, look at the statue and tell me what else you see, besides the Bible and the fireman’s helmet.”

Mr. Nelson nodded. “Yes. That’s a mourning dove. They sit on the statue all the time.”

The kids stared up at the mourning dove perched on the statue’s head, when suddenly the dove swooped down and landed right on top of Justin’s baseball cap!

“Ahh!” Justin froze. He wasn’t sure what to do with a bird on his head.

“Shoo, shoo!” Mrs. Bentley swooshed her hand toward the dove.

“Coo, coo!” the dove replied. But it would not budge. The dove just sat there and pecked at the button on top of Justin’s cap.

When Justin tried to look up at the bird, everyone giggled.

“Justin,” Jessie laughed, “you look like a memorial statue!”

“Let me help you,” said Mr. Nelson, as he gently gave the dove a push. It fluttered its wings and flew back to the top of the statue.

The kids thanked Mr. Nelson as they all marched off to find a place to eat their lunches. When they returned to class, Mrs. Bentley reviewed what they had learned about the memorial. “A memorial helps us remember things that happened in the past.”

“And,” Justin added, “I’ll remember to watch out for mourning doves!” 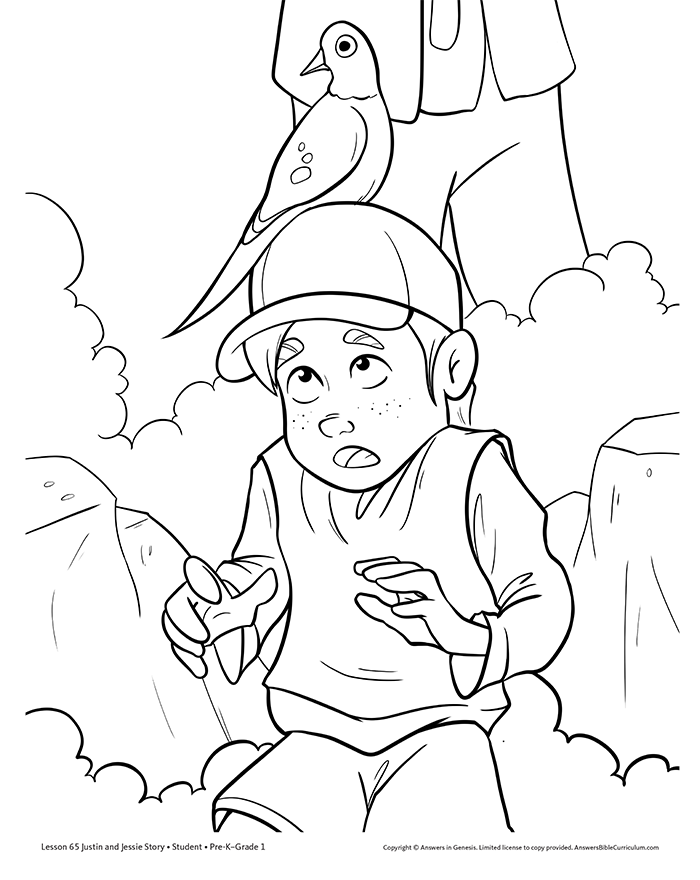 Previous Article Backyard Secret Spy Next Article Because I Said So