“Whoa!” shouted Justin as the boat wobbled back and forth.

“Just sit down in the seat there, Justin,” said his dad.

“I thought the boat was going to tip over when I got in,” laughed Justin as he gently sat down in his place in the middle of the boat. He tugged on the strap of his bright yellow life jacket. If he fell into the water, his life jacket would make him float. This was going to be a great day! It was Justin’s first fishing trip with his dad.

“Hold on, here we go!” Dad started the motor—vroom—and off they went.

The little fishing boat scooted across the water on its way to the middle of the lake. Justin held on and looked at all the tall, green trees around the lake as they whizzed by. He watched the little waves their boat made in the water—and he sputtered when spray hit him in the face! Brrr! The water was freezing!

When they found a good place to fish, Dad stopped the motor and tossed an anchor over the side. “This looks like a good spot,” he said.

Justin and his dad got their fishing poles ready. They put some bait on the hooks and dropped the lines over the sides of the boat—bloop—down they went deep under the water. Now it was time to wait for a fish to bite. 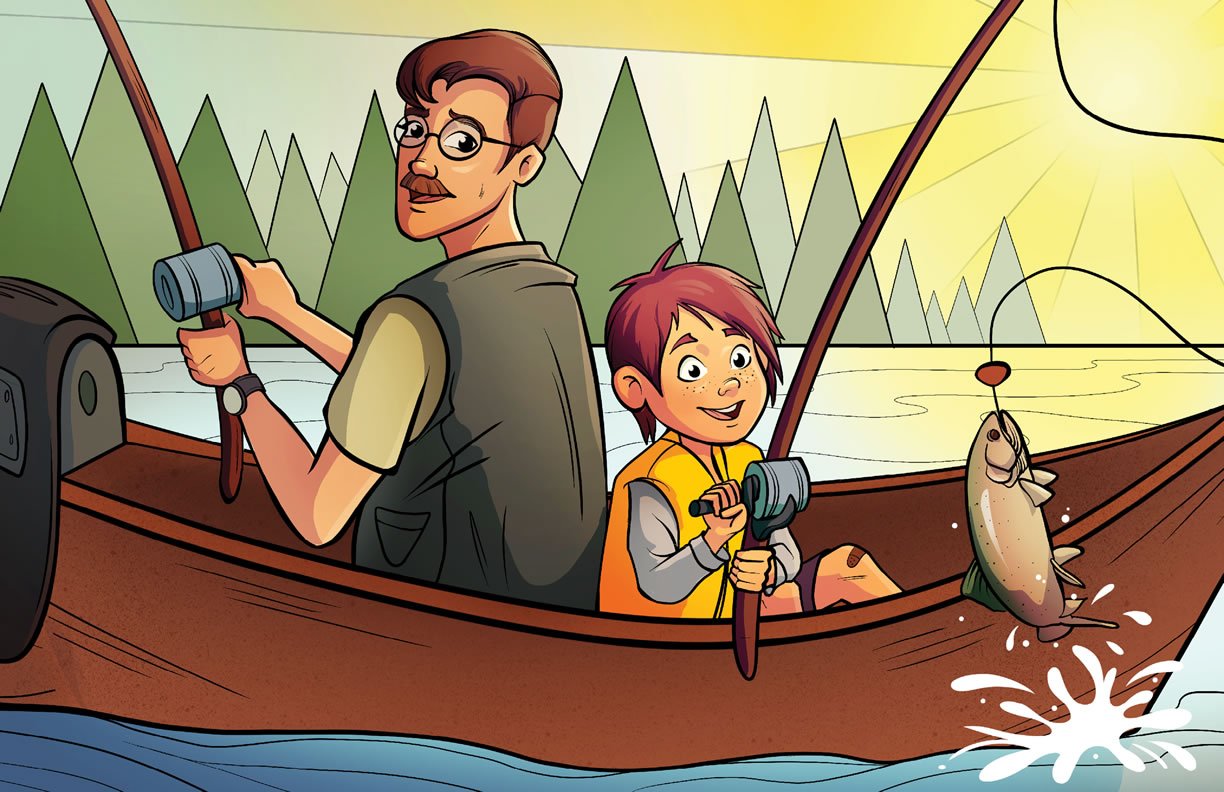 Justin held onto his pole tightly, waiting for the first fish to nibble on his bait. He decided to look around. The lake was a greenish-blue color. There were other boats close to theirs. Justin watched as another boy and his dad put their lines in the water, too.

“Hey, Dad,” said Justin, “it looks like they’re doing the same thing.” He pointed to the other boat.

“Yep. Looks like it . . . except for that,” said Dad as they watched the other boy toss his candy wrapper and then a soda can into the water.

“Eww! You’re not supposed to toss trash in the water,” said Justin. “That’s bad for the fish, right?”

“Yes, it is,” Dad replied. “And it makes the lake dirty-looking, too. If everyone did that, the lake wouldn’t be pretty anymore. And that’s not good stewardship.”

“A steward is someone who takes care of something that belongs to somebody else,” explained Dad.

“And the lake and fish belong to God ‘cause He made them, right?” Justin replied.

“That’s right! So keeping the lake clean is part of taking care of God’s creation.”

All of a sudden Justin felt a tug on his line! He jerked up on his fishing pole and started reeling. “I think I got one!” he squealed.

“Keep reeling it in,” Dad said as he reached out with a net and helped Justin pull in a beautiful rainbow trout. “Look at that! It’s a beauty!”

Dad took out the tape measure to see how long the fish was. “Hey, it’s a keeper,” he said.

“How come you had to do that?” asked Justin.

“Well, if the fish isn’t very big, it’s better to throw it back in so it can keep growing,” Dad explained.

“And that’s part of being a good steward?” Justin asked.

“Yep,” Dad replied as he baited Justin’s hook again. Justin let the hook plop back into the water and watched as it floated down under the ripples.

“If we’re supposed to take care of the fish, how come we’re gonna eat them?” asked Justin.

“Well, God has given us the responsibility to care for His creation, but He also wants us to enjoy it. So we will eat the ones we catch if they’re big enough. And we’ll catch just enough to eat so we don’t waste them.”

“OK! I want to be a good steward for God, too,” said Justin.

The next fish got away from his hook, but Justin wasn’t too disappointed because he got to watch his dad reel in an even bigger trout than his. They took a break to eat the sandwiches, fruit, and cookies Mom packed for their lunch. They put their trash in a bag to take back to the dock to throw away.

They fished for the rest of the day until it was almost dinner time. Justin wanted to keep on fishing, but they already caught enough fish to share with Jessie’s family. So they made their way back to shore.

Justin was excited to show his mom the great catch of fish! She would fry them up for dinner when they got home. Justin could hardly wait.

They drove home pulling the little boat on a trailer behind them. Finally, they turned into the driveway. Justin jumped out and ran into the house. “Mom! Mom!” he shouted, “look what we caught!”

“Those are beautiful, Justin! Looks like you guys did a great job fishing,” she smiled as she took the fish. “Why don’t you go tell Jessie about it? She’s in the family room with Ellie.”

Justin ran into the family room; he was so excited to tell Jessie about his fish. “Hey, Jessie! Guess what!” he shouted happily. Then suddenly he screeched to a stop. “What did you DO?!” he yelled. 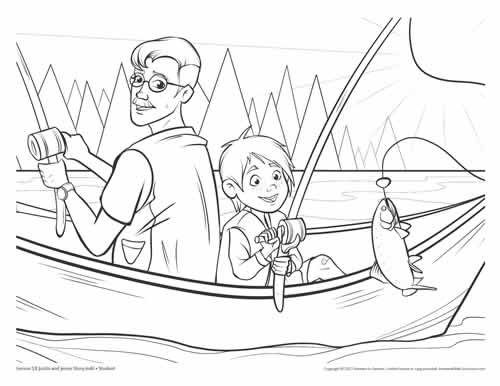