Justin’s and Jessie’s families had been walking all around the big zoo. After watching the zebras, they came to a sparkly white building shaped like a giant igloo. As they walked inside, a burst of chilly air blew all over them.

“It’s because this section of the zoo is about the Ice Age animals, so you’re supposed to feel like you’re back in the Ice Age,” explained Jessie’s mom.

“I’m freezing!” said Jessie as she jumped up and down trying to stay warm.

“Here, put your sweater on.” Her mom handed her a yellow sweater.

“Woah! What is that?!” shouted Justin. He pointed to a large, furry animal with huge teeth and a long, flat tail. “It looks like a giant beaver!”

“That’s because it IS a giant beaver,” said Justin’s dad.

“Ha! That can’t be a real animal. There’s no such thing!” Justin exclaimed.

Jessie thought for minute. Justin scrunched up his forehead and thought hard, too.

“And God made all the land animals on the same day?” asked Justin.

“Why do you think the sign is wrong?” asked Justin’s dad.

“The Bible tells us that God made everything 6,000 years ago,” Justin replied.

“Hmmm. That means the beaver was around before God could make it,” explained Justin’s dad.

“So we can’t believe what the sign says?” Justin asked.

“We have to be very careful about what we believe. Many people don’t believe what the Bible says. They say animals were around millions of years ago,” said Justin’s dad.

“But if you know what the Bible says, then you can know the truth,” added Jessie’s dad.

“So that’s why we read the Bible all the time?” asked Jessie.

They moved on to the next display. Inside the glass there was a tiger with long, curved teeth. “Ooh! I know this one. It’s a saber-toothed tiger,” said Justin.

The kids turned a corner. “Wow!!” they both shouted. 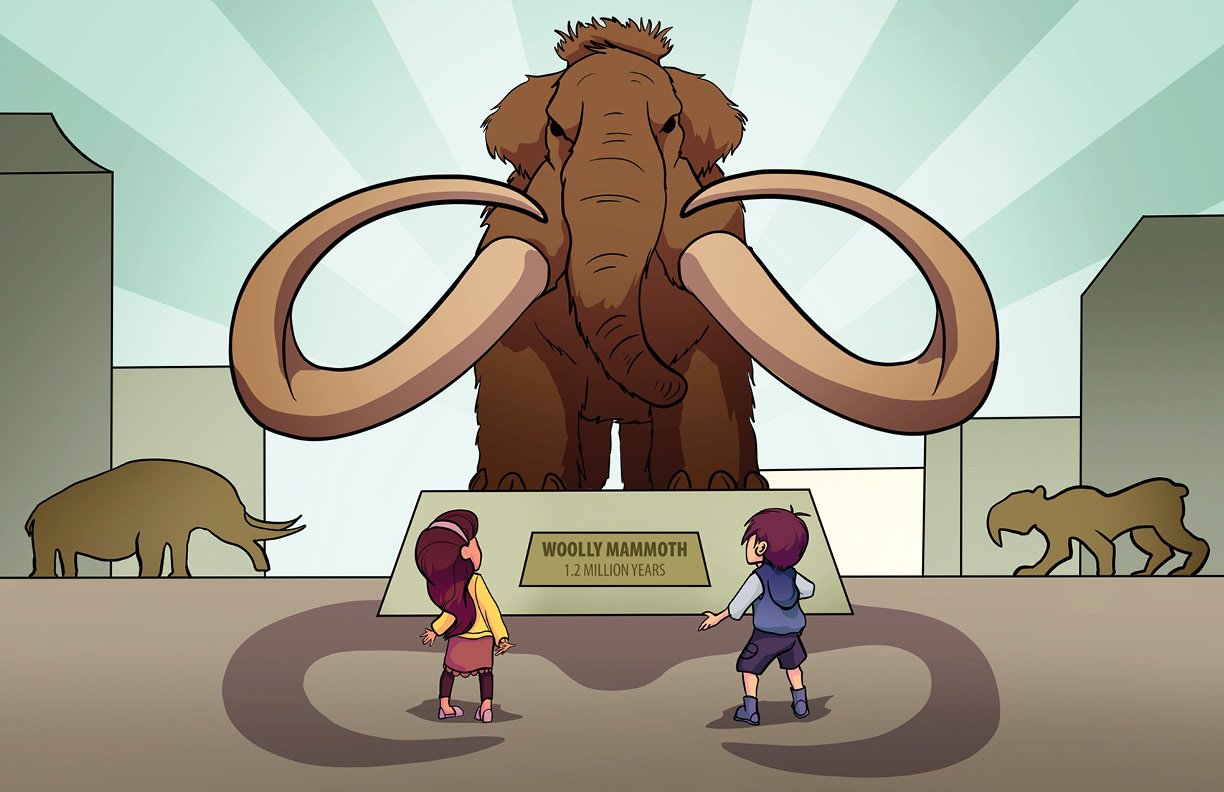 Justin’s and Jessie’s parents came around the corner and stopped suddenly. “Wow!” they exclaimed. Right there in front of them was a huge woolly mammoth.

“Mammoths were real, weren’t they?” Justin asked his dad. “I hope they were.”

“Yes, Justin,” his dad replied. “Scientists have found fossils of them.”

“Uh oh,” said Justin’s mom. “I’m afraid the sign is wrong again. It says here that they lived 1.2 million years ago. Is that true, Justin?”

The families walked on. They looked at all the animal statues behind the glass.

“How come there aren’t any real animals in here?” asked Jessie.

“Because most of the animals that lived during the Ice Age have become extinct.”

“What? Why did they stink?” Jessie asked as she scrunched up her nose.

Everybody laughed. “No, Jessie. Not stink. They became EX-tinct,” Jessie’s mom explained. “That means they all died out, and there aren’t any more of them living today.”

“Oh!” laughed Jessie. “I thought you meant they all smelled funny like a stinky skunk.” She looked at Justin and made a goofy face, and the two of them broke out in giggles.

“Hey, Dad,” Justin asked when he finally quit laughing about the stinky animals. “Do the signs tell us anything true? Or are they all wrong?”

“There are some true facts, Justin. But they are mixed up with things that are not true. So you have to be careful especially when it says that things lived way more than 6,000 years ago.”

“Right,” said Justin’s dad as he opened the door so they could go back outside.

After spending another hour at the zoo, the tired kids headed to the van with their parents.

“I’m glad we got to come to the zoo today,” said Jessie as she hugged her pink stuffed woolly mammoth she got at the zoo’s gift shop.

“Yeah. And you know what?” Justin said as he tucked his own blue stuffed mammoth under his arm. “I’m glad we have the Bible to help us keep from getting all mixed up, too.” 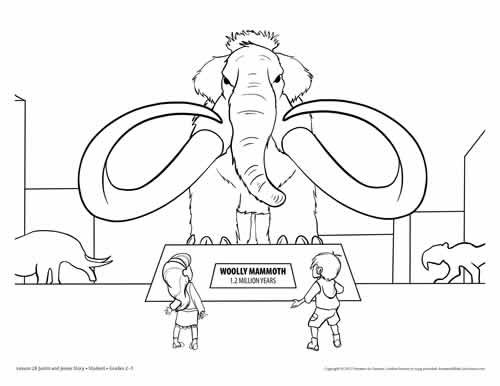