“Mr. Jason, do they really eat bugs in Africa?”

“There are a few bugs the people in the jungle might eat, but not usually,” replied Mr. Jason, a missionary who was visiting the kids’ Sunday school class. He continued, “But, there was one time I didn’t understand something important about one really nasty bug,”

The kids all leaned forward in their seats; they wanted to hear this story!

“One day shortly after I’d come to the jungle, I was out walking with my African friend. We stopped when we saw a disgusting bug crawl across our path. It had two long hairy antennas sticking out of its black body.”

“It was pretty ugly. Well, my friend stopped and pointed at it and started saying something. I only knew a few words of his language, and I thought I heard him say the words for ‘you’ and ‘eat.’ So guess what I did?”

“You ate it!” they shouted.

Mr. Jason went on with his story. “Well, I picked up the ugly thing and looked at it. My friend kept saying the same thing, so I figured he was daring me to eat it. I thought it would make me look like I was brave if I did what he said, so I opened up my mouth . . .”

“. . . And I was just about to drop the nasty thing into my mouth when my friend slapped the bug out of my hand and started laughing!”

Mr. Jason paused while the kids giggled then explained, “I found out later that my friend was saying that it was NOT a good idea to eat this bug because it was a stink bug and would taste really awful. He wasn’t telling me to eat it; he was telling me NOT to eat it. But I didn’t understand the language very well and got confused.”

The kids all clapped and laughed.

“Wow! I like Mr. Jason,” said Justin as he and Jessie left their classroom.

“Me too! I’m glad he didn’t eat the stink bug though. That would’ve been awful,” said Jessie.

“Yeah, I guess it’s easy to get into trouble if you don’t understand the language,” Justin said as they went to find their parents.

The next day, Justin’s mom took the kids to the park. Justin and Jessie skipped along the sidewalk. Pretty soon they could see the playground.

“Can we run the rest of the way?” asked Justin.

“On your mark, get set, go!” Justin shouted to Jessie. They raced to the play area and climbed up the ropes and crawled through the tunnels laughing and shouting at each other. But when they came to the top of the big twisty slide, a smaller boy stopped them. He said something, but they couldn’t understand him at all.

The boy chattered at them again and pointed down the slide. 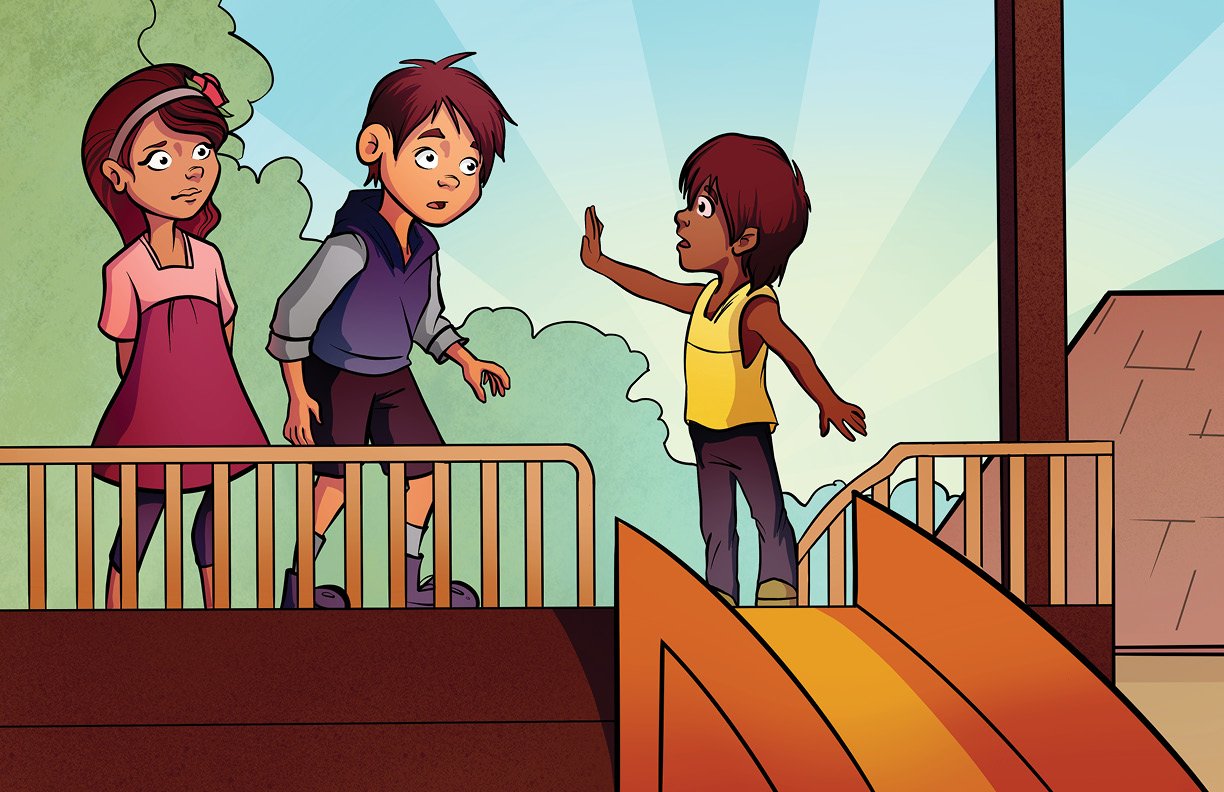 Justin shook his head and tried to move past the boy, but the boy put up his hands to block Justin.

The kids stared at each other, but the boy wouldn’t budge from the slide. Finally, Justin got mad.

“I want to slide, please,” Justin said firmly. He brushed past the boy and sat at the top of the slide.

The boy pointed some more and finally turned and scrambled down one of the ladders to his mother, who was sitting on a bench nearby.

Justin told Jessie, “I guess he didn’t want to share the slide.”

“Three, two, one—blast off!” he shouted as he whooshed down the slide. Suddenly, near the bottom, he heard a splash and felt something cold and wet spreading across his pants. He stood and looked at his backside. “Oh, no!”

“What happened?” asked Jessie from the top of the slide.

The other boy came over with his mother, who said, “See, my son, he tell you no go on slide.”

Justin was embarrassed and a little mad. Why didn’t the boy tell him in a language he could understand?

Jessie slid down the slide since Justin had already dried it all off with his pants. “Hey, Justin. This is just like the story Mr. Jason was telling us about when he didn’t understand the guy and almost ate that icky bug.”

Jessie started to giggle, and pretty soon Justin was laughing, too. The boy and his mother laughed with them.

Justin felt the back of his pants. Yep, they were soaked. But he didn’t care, he could change when he got home. For now, Justin was ready to slide again.

“Well, the slide is dry now. Come with us,” he said to the boy. The boy looked at him. Justin waved his hand as if to say, “come.” Then the boy understood. The three of them climbed the ladder and took turns racing down the slide over and over. They spent the next hour playing together. Even Justin’s mom and the boy’s mom sat together and started talking.

When it was time to go home, Justin and Jessie said good-bye to the boy and his mom. The boy turned to Justin and said, “Gracias! Um, thank you,” then turned and grabbed his mom’s hand.

“That was confusing,” said Justin.

“Yeah, but we made a new friend,” said Jessie.

“Maybe you two should learn some Spanish,” said Justin’s mom as they walked up the sidewalk.

“Is that what he was speaking?” Jessie asked.

“Yes, but his mother could speak some English, so I could understand her pretty well,” Justin’s mom replied.

“Yeah,” said Justin as he patted his wet pants, “I guess it’s pretty important to understand each other.” 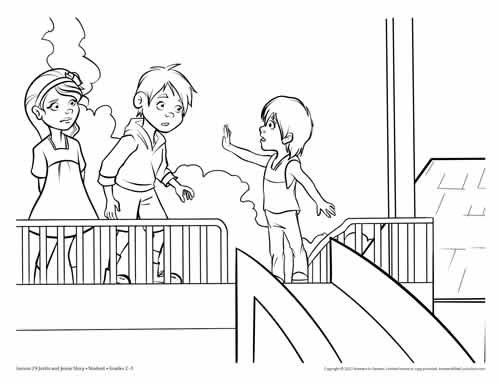 Previous Article Ice Age Mix-Up Next Article Just Like Me