“Hey, Mom! Why is this Easter picture sitting here? It’s not Easter, is it?” Jessie stared at the pretty picture on the table. It had three crosses at the top with the sun shining behind them. Below the crosses there was a cave with a huge stone next to it.

“That must be the tomb that Jesus was in. But what does this say?” Jessie asked.

“Hmmm. And what about that word?” Jessie asked again.

“That word is gospel,” Mom answered.

“Yes, I’m sure you have. But do you know what it means?” asked Mom.

“Yes, it does. And you know what? They both mean the same thing. The word ‘gospel’ means good news,” Mom explained. “The good news is that Jesus died for sinners on the Cross.

Jessie pointed to a cross on the picture then at the big stone. “And then Jesus rose again from the dead. He’s alive in heaven, right?”

“But if it’s not Easter, why do you have this picture out?”

“Because the gospel is good news all the time, not just at Easter. I’m going to put it in a frame and hang it on the wall. Then we can think about the good news whenever we see it,” said Mom.

“OK. May I go play outside now?” Jessie asked as she skipped to the back door.

Jessie opened the door, and there was Matt, the red-haired boy from across the street, standing there.

“Hi, Matt. You wanna play? I’m going to see if Justin wants to come out and play, too,” said Jessie as she headed to the gate. Matt wandered along behind Jessie up to Justin’s door.

When Justin came outside, Jessie blurted, “Justin, guess what! I have good news. It’s called the gospel.”

“The gospel? Oh, you mean that picture with the crosses and the tomb where Jesus was,” grinned Justin.

Jessie was flabbergasted! “What?! How did you know?” she asked.

Justin laughed. “My mom gave that picture to your mom yesterday. She told me all about it.”

“Huh? What are you guys talking about?” asked Matt.

Jessie and Justin explained to Matt about the picture and the good news about Jesus and how He forgives sinners so they can go to heaven.

But Matt just shrugged his shoulders and said, “Oh, I don’t believe that stuff. My mom says that I’m a good boy, and she’s sure I’ll go to heaven.” 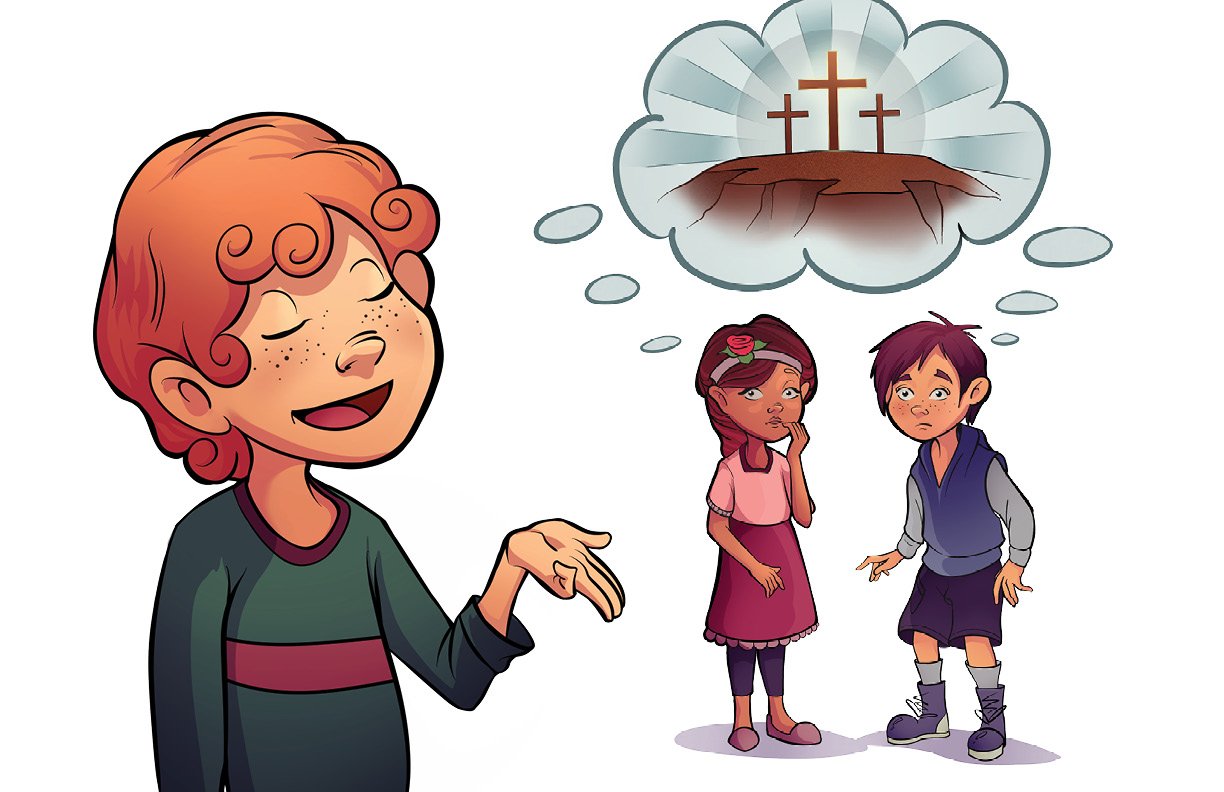 Justin and Jessie were confused. Why didn’t Matt care about Jesus? They really didn’t understand at all. They loved Jesus, and their families loved Jesus, too. This seemed so strange.

“Hey, Matt!” a tall boy called from across the street. “Mom wants you to come clean your room.”

“Gotta go. See ya later,” Matt waved as he headed back home.

Justin’s dad came outside to work in the yard. “Oh, is that your new friend, Matt?” he asked.

“What’s the matter? Why do you two look so sad?” asked Dad. He sat down on the porch, and the kids sat down next to him.

They told him how they shared the gospel with Matt and how he said he didn’t believe in Jesus but was sure he would go to heaven because his mom said he was a good boy.

“Oh, I see why you’re feeling kind of sad,” said Dad. “But you know what? Some people don’t know they need Jesus because they haven’t heard the bad news yet.”

“Well, it’s kind of like your Uncle Howard, Justin. He always said he was doing the best he could to be good so he could go to heaven. But one day, he visited our church and heard the bad news. The pastor explained how the Bible says all people have sinned. No one can get to heaven by being good.”

“Yes, Justin. We are all sinners. That’s the bad news in the Bible. When Uncle Howard heard that, he understood that he was a sinner and couldn’t ever be good enough to go to heaven. That’s when he knew he had to trust in Jesus to forgive him of all his sins.” Dad smiled and leaned back on the porch step.

“So maybe Matt hasn’t heard the bad news yet,” suggested Justin. “Maybe we need to tell him that part first.”

“Yeah!” agreed Jessie. “Then Matt will understand why the good news is so good!”

“Mm hmm. But don’t feel bad if Matt doesn’t get it right away,” said Dad. “Sometimes it can take a while for someone to really understand the bad news and the good news together. Uncle Howard was 45 years old before he believed in Jesus.”

“And we can pray for Matt, too!” added Jessie. 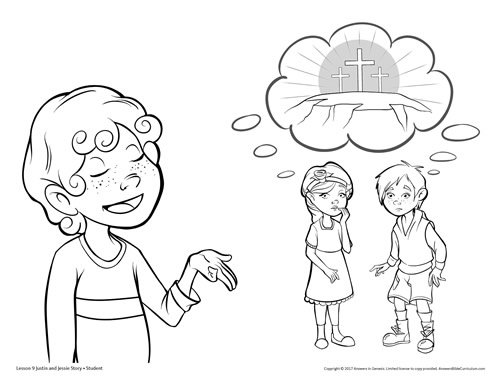