“Jessie! It’s time to get up,” Mom shook Jessie and then opened the blinds covering her window. Sunlight streamed into Jessie’s bedroom. She slowly opened her eyes, just a little.

“Ooh! That sun is bright,” she squealed as she quickly shut her eyes tight.

“Oh, come on. It’s a beautiful day! And I have a feeling it’s going to be great,” Mom winked at Jessie and left the room.

“Huh?” Jessie thought, “I wonder what Mom meant?” Jessie climbed out of bed and went to wash her face. “I don’t remember anything special today.” She kept thinking and thinking as she chose what she would wear today.

Jessie crept down the stairs very quietly. She wanted to see if there was a surprise waiting for her. Pretending to be an invisible spy, Jessie carefully peered over the railing. Nope! Everything looked normal. It didn’t look like anything new or exciting was going on at all. There was Mom stirring oatmeal at the stove. Dad was sitting at the table, reading the Bible out loud to Mom. He was reading something about no more crying or sadness.

“Good morning, Pumpkin!” said Dad suddenly, “I see you, you know.” Dad looked straight at Jessie crouched down on the stairs and smiled.

“Good morning, Daddy,” Jessie replied. “I was checking to see if there was a surprise or something.”

Jessie stared at Dad, then she looked over at Mom. They were sure acting funny today. Jessie began to eat her oatmeal. Mmm, it had raisins in it. She liked chewy raisins.

Jessie’s spoon was halfway to her mouth when she stopped eating. “What was that?”

“You can come in now, Justin!” Mom called.

Jessie sprang out of her chair and ran toward Justin. She DID hear a kitten! She’d always wanted a kitten. Justin placed the little, furry ball into Jessie’s hands. “Mew!” it cried. 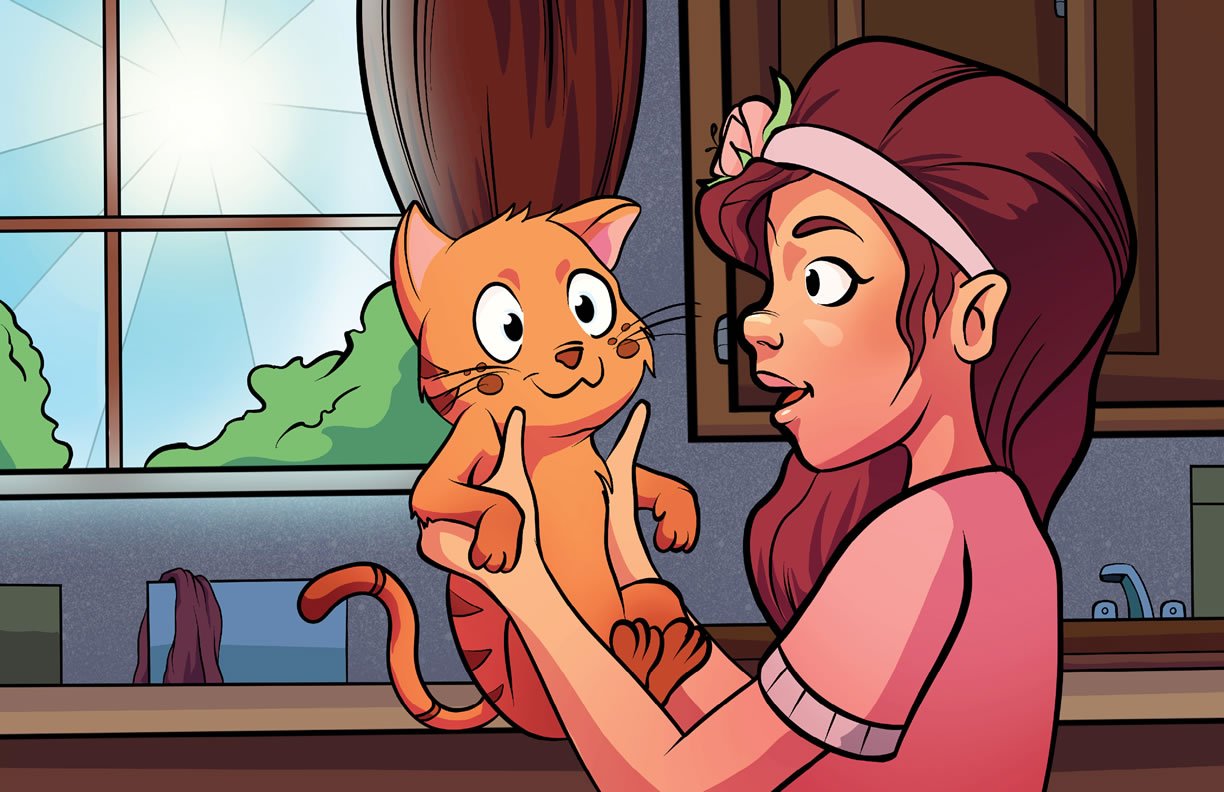 “Don’t thank us, it was Justin who found him.”

“Yeah, he was curled up in the flowers by our porch,” Justin explained, “and I knew you love kitties a lot, so I brought him here. My dad said his momma died and so someone needs to take care of him.”

“I will! Oh, the poor little thing. He’s so cute!” Jessie held the kitten gently. He was a light orange color with stripes on his back. But on his face, there were little spots of darker fur that looked like freckles. “That’s it! I’ll call him Freckles,” decided Jessie.

Jessie and Justin fed Freckles and made him a warm, comfy bed. But he fell asleep on Jessie’s lap instead.

“What a super-neat surprise!” Jessie said to Dad after Justin went home for lunch. “But I’m really sad at the same time. I feel bad that Freckles’ mommy died.”

“But how come things like that happen? Why do things have to die? I thought God loves all His creation.”

“Oh, God loves and cares very much about His creation. When He first created everything, it was all very good; God said so. But do you remember what happened after that?”

“That’s right. God made everything perfect, but sin corrupted it all. Now there is sin and death in the world.”

“So it’s not God’s fault that the mommy cat died?”

“No, it’s because we live in a world with sin and death,” Dad explained. “But you know what? Mom and I were just reading in the Bible today that God promises to make a brand new heaven and earth someday.”

“Is that what you were reading about? A place with no more crying or sadness? I heard you reading that with Mom.”

“Yes! That’s exactly what God’s new place will be like. There won’t be any more crying or sadness or pain. And no more death.”

“It will be happy again?” asked Jessie.

“It sure will. It’s called the Consummation. We don’t know when it will happen, but God promises it in His Word.”

“Me too. But in the meantime, you have a big responsibility to take care of your new kitten.”

Jessie nodded and smiled. Freckles opened his eyes. He yawned so big, Jessie could see his teeny-tiny teeth. Then he crawled up to Jessie’s shoulder and snuggled up under her chin.

Jessie giggled. His fluffy fur tickled. She was sorry about Freckles’ mommy. But she would try her best to be a good “mommy” to him. “I’ll take good care of you now, Freckles,” she whispered to the sleepy kitty.

Freckles looked up at Jessie, then closed his eyes again. “Purr . . . purr,” he replied. 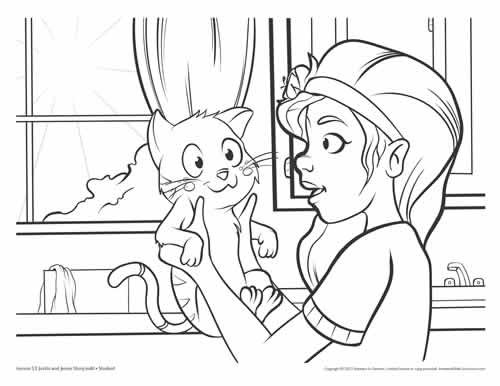