“Beep! Beep! Here I come. I’m the ice cream truck!” shouted Justin as he rode his bike around Jessie’s driveway.

“Hey! Stop. I want ice cream.” Jessie waved her hand and waited for Justin to stop. She opened her play purse and gave Justin some pretend money.

“Here you are, chocolate with gummy bears, just the way you like it.” Justin handed a small stick to Jessie who acted like she was licking it.

Jessie and Justin both stopped what they were doing and turned to see who wanted to play. A small boy with red hair and freckles stood there staring at them. Justin and Jessie stared back. Then the boy repeated his question, “Can I play, too?” 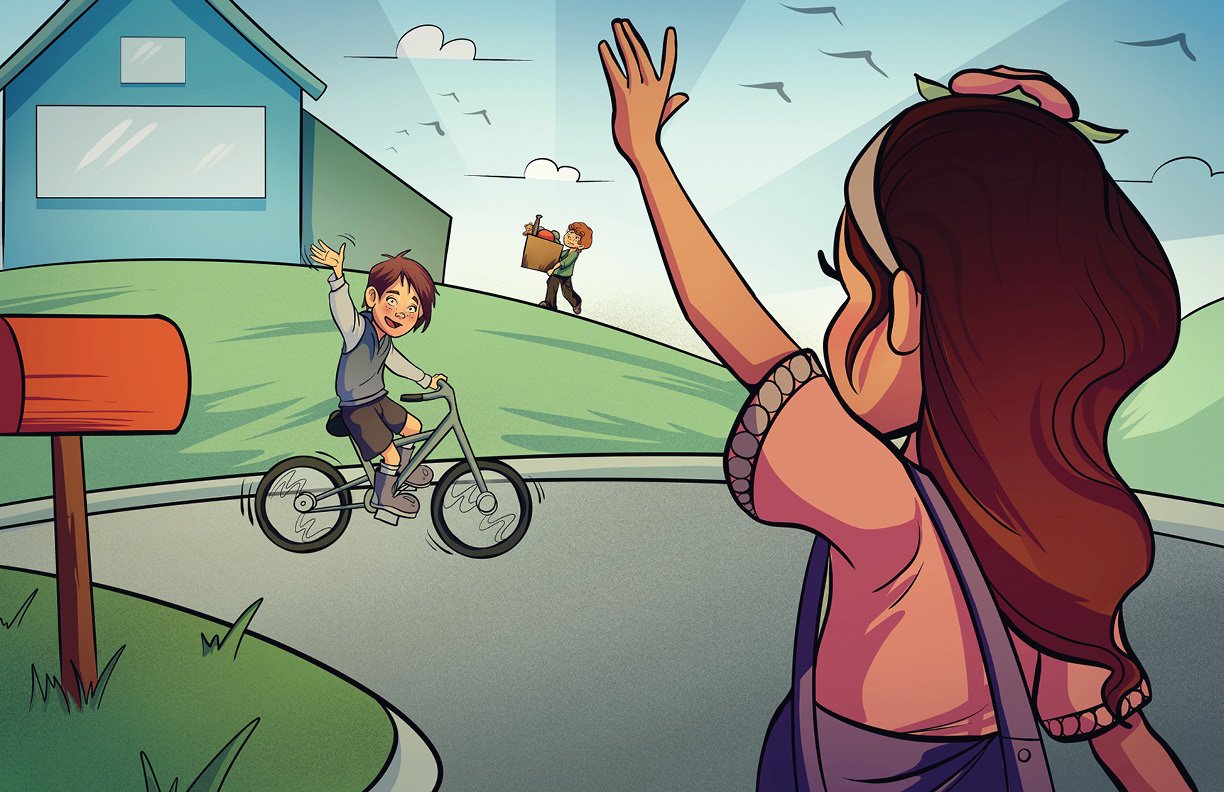 Justin and Jessie looked at each other, and then they both nodded their heads. “Sure you can play,” said Justin. “But where did you come from?” he asked.

“I’m new! My family just moved into the big blue house across the street,” the new boy answered as he pointed back to his house.

“I’m Justin. This is Jessie. What’s your name?” Justin asked.

“Come on!” Jessie exclaimed. “We’re playing ice cream truck. You can play too, if you want.”

“OK.” Matt, Justin, and Jessie took turns being the ice cream truck driver. But after a while they got tired of the game and sat down on the grass. Matt told them about his old house with its tiny backyard. He was sure glad to have a big yard now—he might even get a dog someday!

Justin and Jessie told Matt about their families and what kinds of games they liked to play. They talked about church and how much they liked Sunday school and learning about the Bible. Matt looked at them funny and shrugged his shoulders. “I don’t go to church,” he said. “My mom says the Bible is too old, so it’s not important anymore.”

Just then, Matt’s mom called from across the street for him to come home. Matt got up and said, “See ya later,” and went home.

Jessie looked at Justin. Justin looked at Jessie. Then they both ran into the house where their moms were chatting about gardens and flowers.

“Mom, Mom!” the kids shouted as they came into the room. “Guess what?!”

Justin’s mom stopped talking and turned to him. “Whoa! What’s the matter, Justin? Why are you two rushing in and making so much noise?” she asked.

“Nothing’s the matter,” said Jessie excitedly. “We just met the new boy from across the street. He just moved into the blue house.”

“He said he’s five. He’s kinda nice. But guess what? He doesn’t go to church. He even said that his mom says the Bible is so old that it’s not important anymore,” explained the kids.

“He said that? That’s too bad,” said Justin’s mom.

“Yeah, but Mom, we read the Bible all the time,” Justin replied. “I didn’t know it was too old.”

“How come we still read it?” asked Jessie.

“Oh, my. Let me explain,” said Justin’s mom. “Come sit down, both of you.” Justin, Jessie, and both of their moms sat down together in the living room. “First of all, the Bible will always be very important. It doesn’t matter how old it is because it’s God’s true Word.”

“Right,” said Jessie’s mom, “and God even tells us that His Word is fixed in heaven forever. So it will always be there.”

“Forever? Wow!” exclaimed Jessie. “But will it always be the same? What if God wants to change something?”

“Follow me,” said Jessie’s mom. So they all got up and followed her outside to the front garden. “God will always be the same. God’s Word will never change. It’s like saying His Word is ‘set in stone.’ Look.” She pointed to a large rock in the garden. There were words carved right into it!

“Cool! What does it say?” asked Jessie.

They all knelt down around the rock as Jessie’s mom pointed to the words, “It says, ‘Forever, O Lord, your word is firmly fixed in the heavens.’”

“It’s a Bible verse! But how did it get there, Auntie Bev?” Justin asked.

“When I was younger, one of my friends told me she didn’t believe the Bible was true. She said it was too old to matter. And when I told my mom and dad about it, they showed me this same verse. Then when I grew up, I asked a friend of mine to carve it into a stone for me so I could put it in my garden as a reminder that God’s Word never changes. I can always believe it and trust it.”

“That’s wonderful, Bev!” said Justin’s mom. “Maybe we can all write those words on some stones and keep them to remind us that God’s Word will never change. I’ll go grab some pens.”

Justin and Jessie both needed help writing the words on the stones they picked out. Jessie wrote her verse with a purple pen, and Justin used red. When they were all finished, they each found the perfect spot in their gardens. “And,” they decided, “these stones will be great to show Matt tomorrow!” 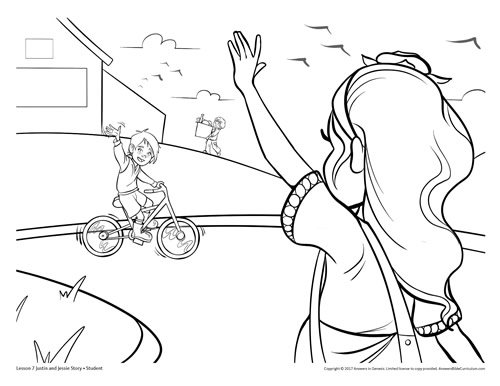 Previous Article Strawberries & Scribbles Next Article Complete or Not Complete?