“Where are you going, Justin?” asked Dad from his seat by the fire. Mom and Ellie were finishing their toasted marshmallows.

“I’m just going to the lake to get the sticky marshmallow off my fingers,” Justin replied.

“Be careful by the edge of the water. Don’t get all wet, please,” said Mom.

“And watch your step on the trail. It’s dark,” Dad added.

“OK, I’ll be careful,” said Justin as he walked away from the campfire. Justin felt like a brave explorer as he took the path to the lake. But he hadn’t gone very far when suddenly everything turned black. Justin put his hands out in front of him to make sure he wasn’t going to run into a tree or get a branch in his face.

“I think the lake is straight ahead,” said Justin to himself. He walked a little faster until—THUMP!

“Owww!” yelled Justin as his foot hit a huge rock and sent him tumbling to the ground.

“I’m coming.” Just then a beam of light shone on the path and landed on Justin. Dad picked him up and carried him back to the fire. He brushed the dirt off Justin’s knees, and Mom cleaned his sticky, dirty hands.

“Why didn’t you use your flashlight to see the trail?”

“My flashlight! I forgot it was in my pocket!” Justin pulled out his small silver flashlight. 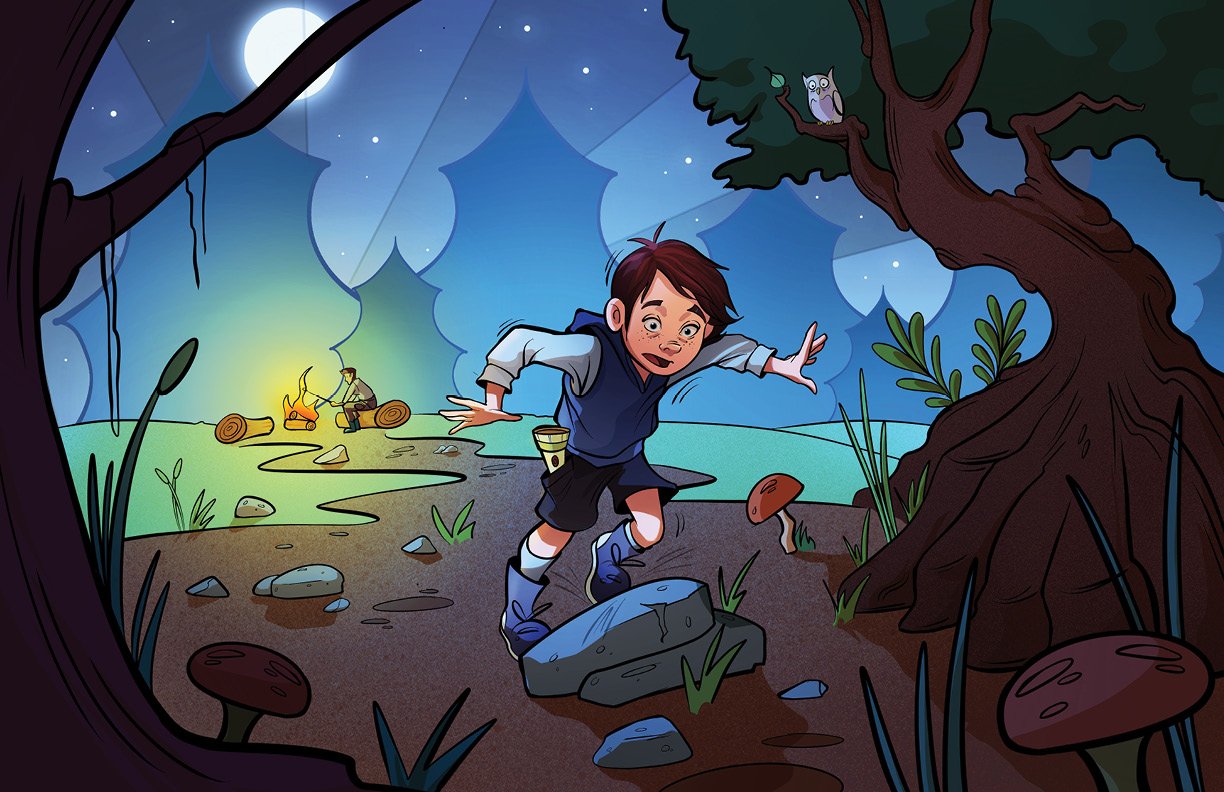 “Don’t you think that would have helped you see the giant rock that attacked your foot?” teased Dad. “It didn’t help you much in your pocket, did it?”

“No. But now I know I need to keep my flashlight in my hand when I’m walking around in the dark.”

“You know,” said Dad as he searched in his backpack, “that reminds me of something else we have that’s very important, but many times, we forget to use it.”

“What’s that?” asked Justin, wondering what Dad was looking for in his backpack.

“Here it is.” Dad pulled out his Bible and held it in the light so Justin could see it. “I want to read you something.”

“OK. I’ll hold the flashlight.” Justin pushed the button and the bright light shone on the pages.

Dad read, “Your word is a lamp to my feet and a light to my path.”

Justin was a little confused. “A lamp to my feet? What does that mean?” he asked.

“Well, think about it. What does a lamp do? You have one at home by your bed. What happens when Mom turns it on at night?” asked Dad.

“It makes the room lighter.”

“Right. So a lamp gives light when you turn it on. But what did this verse say it gives light to?”

“My feet!” Justin understood now. “Like my flashlight would’ve done for my feet. Then I wouldn’t have bonked my toe on the rock.”

“Exactly. So this verse is talking about God’s Word,” Dad explained. “It’s like a lamp or flashlight that shows us where the big rocks are. If we read it every day, it will guide us around things in life that can hurt or confuse us. Speaking of hurt, how’s your foot? Still want to walk to the lake?”

The two of them found the path with their flashlights lighting the way. Dad stopped by the rock where Justin had fallen earlier.

“Watch this cool trick.” Dad opened up his Bible and laid his flashlight on top of the pages, then he tipped the Bible down, pointing to the ground. It looked like the Bible was shining the light on the path!

They watched the moonlight sparkle on the water and took turns throwing rocks as far as they could into the lake. Then they followed the path back to camp. Mom was enjoying the warm fire as she held a sleepy Ellie in her arms.

“Well, I’m ready for my sleeping bag,” said Dad. “Time for bed. We’ve got lots to do tomorrow!”

“That sounds good to me,” Mom replied.

Justin climbed into his sleeping bag and prayed with Mom and Dad. “Good night, Mom. Good night, Dad.” Then he clicked off his flashlight and drifted off to sleep. 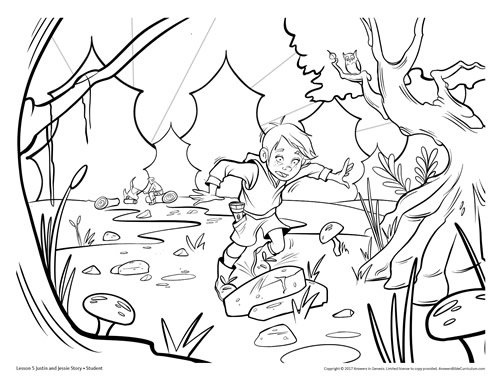