“Yes, you have to. Now go do it,” Jessie’s mom spoke sternly.

Jessie stomped up the stairs as she went to clean up her messy room. Her jeans were lying on the floor and so were some of her shirts. One of her shoes was sticking out from underneath the bed. Her closet was a jumbled mess of toys. Jessie tried to shut the door to the closet. She pushed it really hard to make it stay closed.

“There. That part’s done.” She smiled, but it wasn’t a real smile. She was still angry that she was cleaning up instead of watching TV.

Next, Jessie walked over to her tea party table. Little cups and plates were lying all over it. She grabbed the box they belonged in and started dumping the pieces into it. Suddenly she heard a terrible noise—craaack!

She stared at the pieces in the bottom of the box. “Uh oh, Mom’s gonna be mad,” she grumbled as she quickly put the lid on the box. “I’ll just hide it in here for now.”

Jessie tossed books and toys on the shelf and threw the stuffed animals in a pile in the corner. She put the crumpled blankets on the bed and then kicked her jeans, shirt, and shoe under the bed. “There,” she said, “Good enough.” Jessie shut the door and tromped down the stairs.

“Okay. Thanks,” Jessie said. She tried to smile, but it was only a halfway smile. She didn’t feel very happy, but she didn’t want her mom to think anything was wrong. Jessie took a cookie and asked, “May I go watch TV now?”

“I suppose so since you got your room cleaned up,” Mom said. 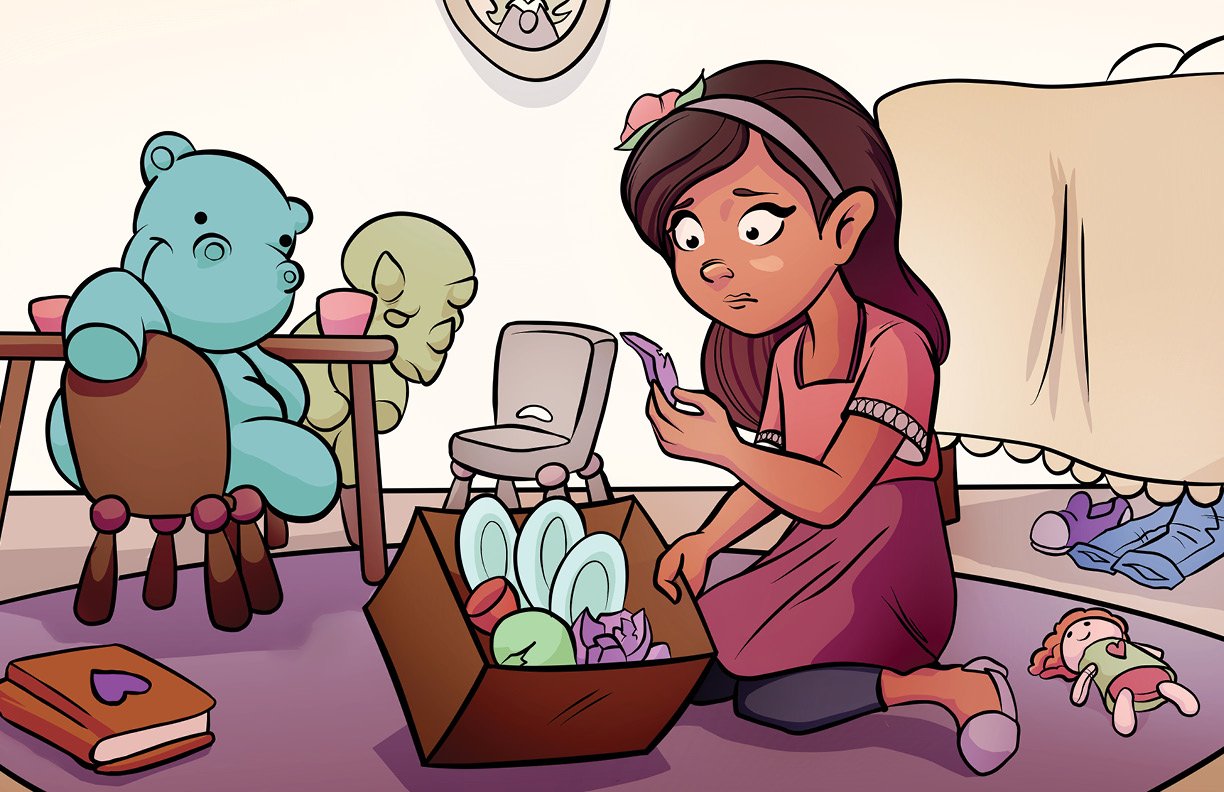 Jessie quickly looked down at her cookie. Did Mom know she didn’t really clean her room right? Maybe if she just kept smiling, Mom would think she did.

Jessie went into the living room to watch a show. After awhile Mom came in and sat down beside Jessie. “What was your show about today?” she asked when it was over.

“Um. It was about two boys who were each supposed to do a job for their boss. One boy went and worked really hard and did a good job. But the other boy didn’t want to do it because he didn’t like the boss.”

“Oh, so what happened? What did the boss say?” asked Mom.

“Well, the boy who liked the boss did really well. And the boss was super happy with him and said he would give him extra money.”

“Yeah. But the other kid who didn’t like the boss ended up getting fired.”

“Uh huh. He acted all happy and smiled a lot, but he didn’t try very hard and didn’t do his job right,” Jessie explained.

“Hmmm. You know what that reminds me of?” asked Mom. “Cain and Abel.”

“You mean from the Bible?” Jessie asked.

“You mean God knew what they were thinking?” asked Jessie.

“Yes. God is omniscient. That means God knows everything—even deep down in our hearts,” Mom explained.

“God knows how we feel on the inside?” Jessie nervously squirmed in her seat.

“Yep. He knows how we feel, what we think, why we do and say things—everything. We can’t fool God. Kind of like that boy on the show tried to fool his boss by smiling and acting happy when he didn’t really do his job right.”

Jessie gulped, “Um. I need to go do some-thing.” She jumped up and ran to her room.

Jessie straightened the blankets on the bed and stacked her stuffed animals at the end. She even crawled under the bed and pulled out her clothes and shoe. Next, she raced over to her shelves and stood the books up. She moved to the tea party table and neatly stacked the tiny china dishes in their box and pushed in the little chairs around the table. She opened the closet and moved her toys around so they fit better and looked neater.

Pretty soon, Mom walked in. “Oh, this looks really nice—now that it’s done right,” she said with a wink.

Jessie stopped and stared at her mom. “I’m sorry, Mom,” she said. “I didn’t want to clean my room, so I pretended to do it. And then I tried to smile when I came downstairs to make you think I did it right.”

“Yes, Jessie, I know. When you came downstairs so soon, I figured something was up. But you know, it really hurts me to think you would try to trick me like that and lie about cleaning your room when you didn’t.”

Jessie sniffled. “I’m really sorry. I won’t do it again.”

“I forgive you, Sweetheart,” said Mom as she hugged Jessie close. “It’s a good lesson for all of us. We can’t hide anything from God. We might be able to pretend everything is the way it should be on the outside, but God knows what’s in our hearts, all the time.”

“Oh, I almost forgot,” said Jessie. She walked over to the tea party table and lifted the lid on the box with the china dishes inside. “Here’s something else that I was hiding. I didn’t mean to break it. Will you help me fix it?”

Jessie and her mom glued the sugar bowl back together. “Oh dear,” Mom said as she looked closely at it. “You can still see where it broke.”

“That’s okay, Mom,” Jessie responded. “Now every time I use it for a tea party, I’ll remember that I can never hide anything from God. He knows my heart.” 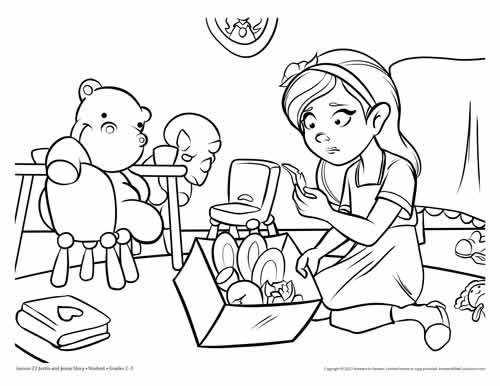