“Me paint! Me paint!” Ellie ran from Jessie to Justin begging to help them paint their pictures. But Jessie and Justin were both very busy with their paintings and didn’t want to give up their paintbrushes.

“No, Ellie,” said Justin, “not right now. I’m almost finished, then you can paint.”

Ellie burst into tears. She ran out of the family room to find her mom.

Justin shook his head. “Poor Ellie,” he said, “she gets mad when she can’t do what I do.”

The kids went back to their painting. “I’ve got red flowers on my picture. See?” Jessie held up her paper so Justin could see her masterpiece.

“Yeah, and I’ve got green trees with a blue T. rex,” said Justin as he showed his picture to Jessie.

Suddenly they heard Justin’s mom calling from the kitchen, “Justin, would you come here, please?!”

“Uh oh,” Justin said, “Ellie must have tattled on us.”

They put their pictures down on the table and went into the kitchen. “What’s wrong, Mom?” Justin asked.

“Ellie is upset about not being able to paint. Is there a problem?” she asked.

“No, it’s just that Jessie and I were both busy painting our pictures. And we were using the paintbrushes, so I told Ellie she had to wait ‘til I was all done,” Justin explained.

“Okay!” Justin and Jessie were hungry, so they hurriedly washed all the paint colors off their hands—blue, green, black, and red all went swirling down the drain.

They sat down and ate their peanut butter and jam sandwiches. “Mmm, strawberry jam, my favorite!” said Jessie.

“Me, too!” Justin said around a mouthful of sandwich.

The two giggled as they chomped on their chips and fruit. Mom went to get some laundry out of the dryer. Ellie wasn’t hungry, so she wandered off to the other room. 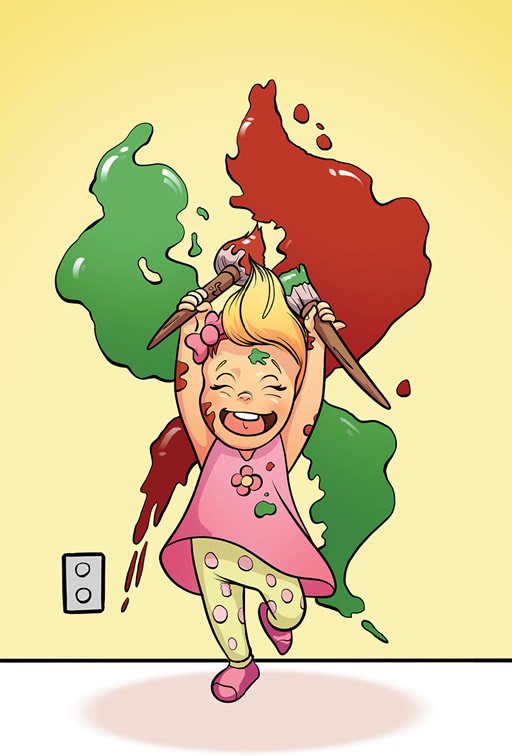 After a little while, Justin and Jessie suddenly heard his mom saying, “Oh, Ellie! No, no! Don’t do that.”

Jessie and Justin both jumped down from the table and ran into the family room. Ellie stood with a paintbrush in each hand, smearing red and green paint on the family room wall.

“I paint!” Ellie announced proudly. Justin and Jessie gasped at the huge blob of red and green paint that was mixed together in one yucky smudge on the creamy yellow wall.

“Justin, you kids didn’t put your paints away,” moaned Mom as she removed the paintbrushes from Ellie’s messy hands.

“We’re sorry, Mom,” said Justin. “We came as soon as you called us, and then we were eating lunch.”

“Do you want us to help you?” asked Jessie.

“That would be great, Jessie. Thank you.”

First, they used soapy water. But they could still see the smudge. Next, Justin’s mom sprayed on some cleaner, and they all scrubbed with sponges.

“Ooh! That looks worse now,” said Justin as he stepped back.

“Well, I’ve got one more thing to try,” said Justin’s mom. She found a bottle of some kind of soapy stuff and spread it on the wall. They all scrubbed again, but this time even the creamy yellow paint started coming off!

“You mean with a piece of paper or something?” asked Justin.

“No, it will have to be painted over. That’s the only thing that will cover the stain. But I do have some of the same yellow paint in the garage.”

Justin’s mom found the paint and went to work on the smudgy wall. She had to paint over the greenish-red blotch three times! Finally the stain was gone—it was all covered over.

“All gone!” said Ellie as she watched from her little chair.

“Yes, it’s gone. You don’t paint here anymore,” said Mom, “only here.” She showed Ellie a piece of paper she laid on the table. Ellie nodded and started painting again—on her piece of paper.

“Wow! That was wrong for Ellie to paint on the wall, wasn’t it?” asked Jessie.

“Yes. But she’s still pretty young and doesn’t always understand what’s right and wrong. What’s really bad is when we get older and keep doing things that we know are wrong.”

“Yeah, that’s right,” Mom replied. “Actually, sin is kind of like that icky smudge on the wall.”

“Huh? What do you mean?” asked Jessie.

“Well, we tried and tried to clean it off, right? But we couldn’t do it, could we?”

“No. We even made it worse!” said Justin.

“Yeah,” Jessie agreed, “the more we scrubbed, the worse it looked.”

“And sin is just like that,” Mom explained. “There’s just no way we can fix it ourselves. We can’t get rid of sin on our own.”

“That’s exactly right,” Mom replied. “Just like the only thing that would take care of the smudge problem was to cover it up with paint.”

“So Jesus paints over our sins?” Jessie asked, feeling a little confused.

“Well, He doesn’t use paint. Jesus used His blood when He died on the Cross to cover our sins. He took the punishment for sin when He died. And when we believe in Him, it’s like His blood covers all our sins and makes our heart clean again.”

“Yes. When you ask Jesus to forgive your sins and you trust in Him, He will make your heart clean and new.”

Justin’s mom picked up Ellie and turned to look over the painting job she had done. Justin and Jessie stood beside her. The wall looked really nice, so bright and clean now that the smudge was gone.

“Uh, what’s going on?” Justin’s dad walked in. He saw all four of them just standing there. They looked kind of funny staring at the wall.

“That’s right,” Mom explained with a wink. “We all decided to paint today.” 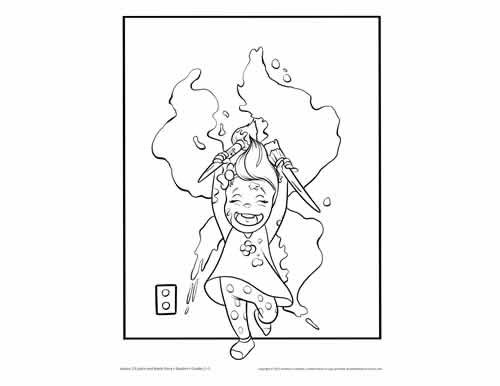