(Continued from last week.) Jessie’s Uncle Robert had lost his job, but he found a new job in the same city where Jessie and her family lived.

Then one day Jessie’s mom noticed a house on their street that was for sale. She called Aunt Angela and told her about it and sent her pictures.

A couple of weeks later, Jessie and Justin were outside playing when Jessie’s mom came running out the door! “Yippeee!” she squealed. “Come with me!”

The kids ran after Jessie’s mom as she went down the sidewalk. They stopped at the house with the for sale sign on it. Only this time there was another sign with big letters. “What does that say?” asked Jessie.

“It says, ‘Sold,’” Jessie’s mom replied as she jumped up and down and clapped her hands. Jessie and Justin giggled at her.

“But Auntie Bev, doesn’t that mean someone bought it?” asked Justin.

“It sure does!” said Jessie’s mom. “And guess who bought it!”

Jessie saw how excited her mom was. Could it be? Were Uncle Robert and Aunt Angela going to move here? That would be super-duper!

“Yes! You’re right. They’re going to be moving into this house in just a couple of weeks. Isn’t that exciting?” Jessie’s mom asked.

“Yeah! I can hardly wait. Hurray!” said Jessie. “And you’ll be able to meet my cousins, Justin. Their names are Emily and Jeremy. I’ve only played with them two times in my whole life, but now we can play with them every day.”

“That will be fun, Jessie. Now I’m getting excited, too!” exclaimed Justin. 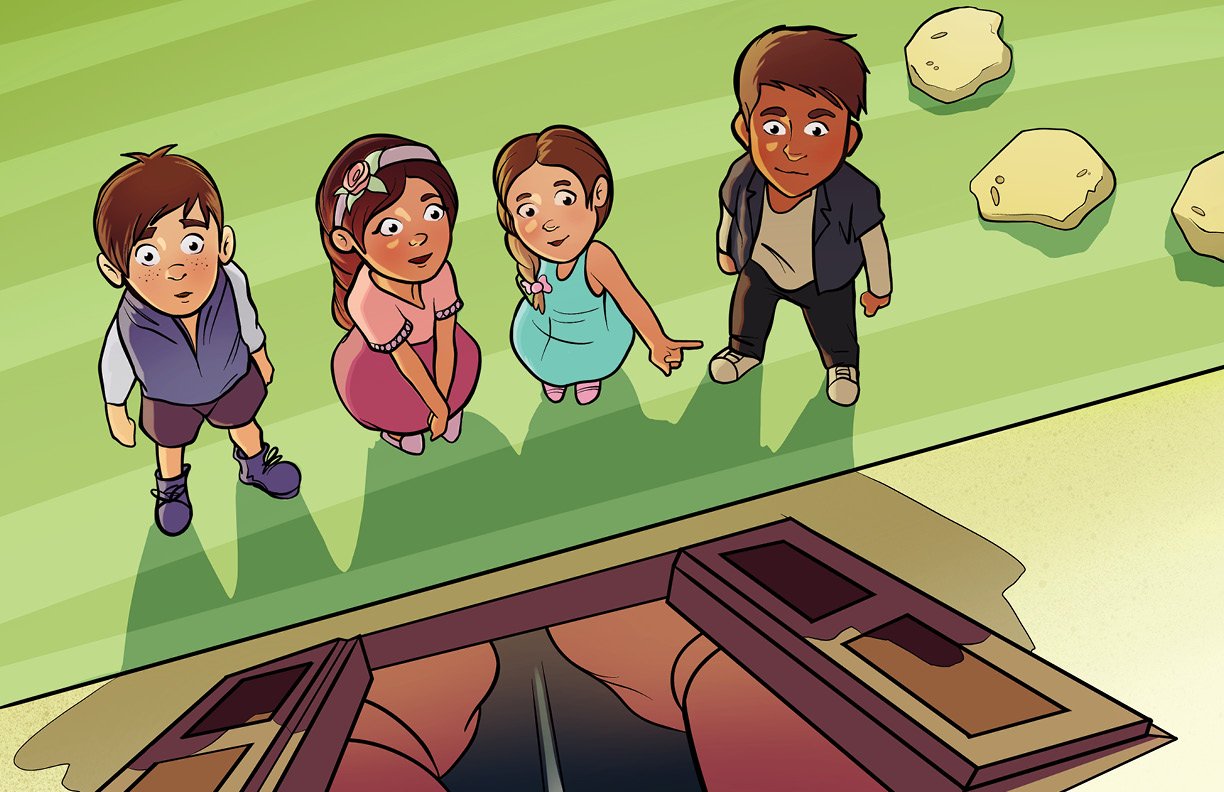 Her daughter, Emily, came into the kitchen. “Mommy,” she said, “I finished packing all my stuffed animals and dolls.”

“Good job, Emily. Will you see how your brother is doing?” asked her mom.

“Okay!” Emily ran to her brother’s room. “Jeremy, Mommy wants me to check on you. How are you doing?” she asked.

“Go ‘way,” he replied. Jeremy sniffled and wiped his eyes. Then he closed the door so Emily wouldn’t stare at him.

Emily ran back to her mom in the kitchen. “Mommy, Jeremy’s crying.”

“He’s what? Oh, dear,” said Emily’s mom. “Well, Emily, why don’t you put all these plastic bowls into the box for me? I’ll go and find out what’s wrong.”

She went down the hall to Jeremy’s room and knocked on the door. “Jeremy, may I come in, please?”

“Yeah,” said Jeremy as he sniffed.

“What’s the matter? Why are you crying?” His mom sat down on the bed and pulled him close.

“I’m scared,” Jeremy answered. “I don’t know anybody at the new house. I don’t want to go.”

“Yeah, sorta. I don’t really remember them. Besides, I’ll have to leave my soccer friends. And what if I can’t find any new friends?”

Tears streamed down Jeremy’s cheeks, and he couldn’t stop them. His mom gave him a big hug. Then she asked him a question, “Jeremy, remember when Daddy and I took you to your very first soccer practice?”

Jeremy nodded, “Yeah. I was scared.”

“Do you remember who I told you about from the Bible?”

“Yeah, Abraham! You told me how God told him to move to a place he never went to before.”

“That’s right. Did Abraham do it?”

“Yeah. He obeyed God and moved to a new place.”

“Yes. Remember, Abraham might have been a little scared, but he trusted God. Daddy and I are trusting God to lead us to the right place, too. Don’t forget, Abraham was a person just like you and me. He loved God, and so do you. So do you think God will take care of you as you move to a new place, too?”

“I guess so,” Jeremy admitted as he started to smile. “Maybe I can even find a new soccer team.”

“Maybe, but we won’t know until we get there, will we? So we need to get packing, okay?” She gave Jeremy another quick hug.

“Okay, Mom,” said Jeremy as he got up and started putting his socks in a box.

Finally, moving day came. Everything was loaded into a huge truck. Jeremy and Emily said good-bye to their friends and climbed into the car and waved as they drove away.

The trip was a lot of fun. They drove for three days. They colored in their new coloring books and listened to stories. One day they stopped to visit an aquarium, and every night they slept in a different hotel.

On Saturday morning, they turned the last corner and drove down the street past Jessie’s house. They turned into the driveway of the creamy yellow house with big brown shutters.

“Those are called shutters. They’re just decorations. But they do look like chocolate, don’t they?” said her dad.

They all got out of the car and stretched. “We’re finally here. Our new home!” exclaimed Mom happily.

“You’re here!” Jeremy and Emily turned around to see Auntie Bev and Uncle Dave hugging their mom and dad. Then they saw two kids running toward them.

Justin and Jeremy smiled at each other and shrugged at the same time. They were both thinking how silly the girls looked trying to hug each other while they jumped up and down.

“Are you Jeremy?” asked Justin.

“Check out the size of the yard, kids,” said Jessie’s dad.

“Giant chocolate bars!” said Jessie and Emily at the same time. All the kids laughed.

“Thank you, God,” Jeremy prayed. “I think I’m going to like it here with my new friends, in this house with the giant chocolate bars.” 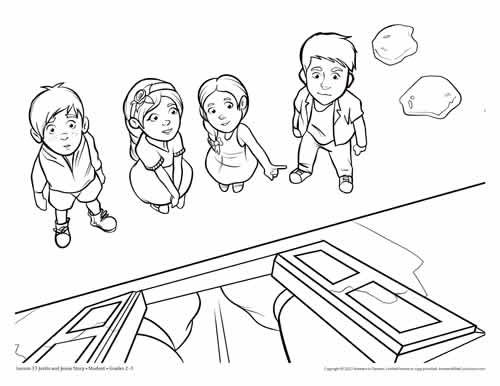